173rd Airborne set to take over in Kandahar 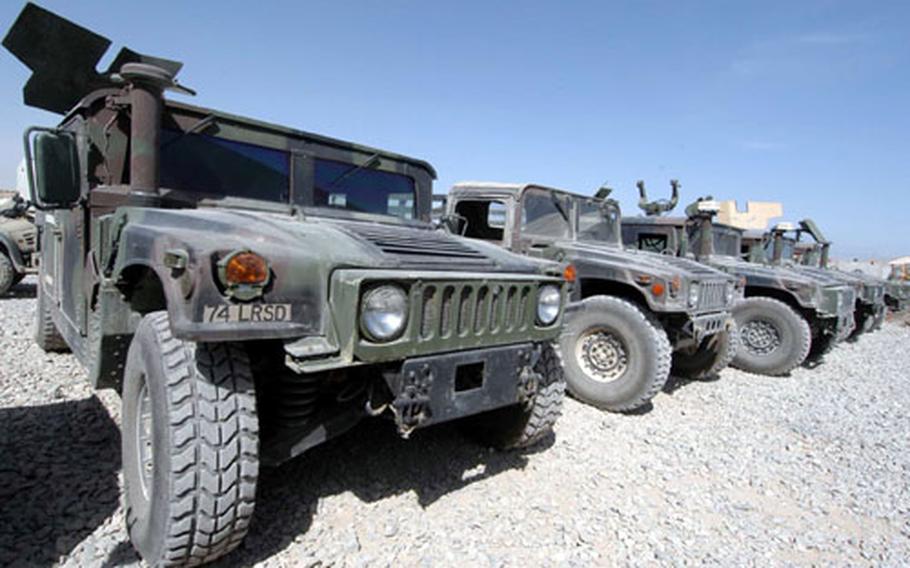 Humvees of the 173rd Airborne Brigade’s 74th Long Range Surveillance Detachment are parked at Kandahar airfield. Mechanics with the 173rd say Afghanistan’s rough roads, dust and heat leave them with plenty of work to do on the brigade’s vehicles. (Michael Abrams / S&S)

Humvees of the 173rd Airborne Brigade’s 74th Long Range Surveillance Detachment are parked at Kandahar airfield. Mechanics with the 173rd say Afghanistan’s rough roads, dust and heat leave them with plenty of work to do on the brigade’s vehicles. (Michael Abrams / S&S) 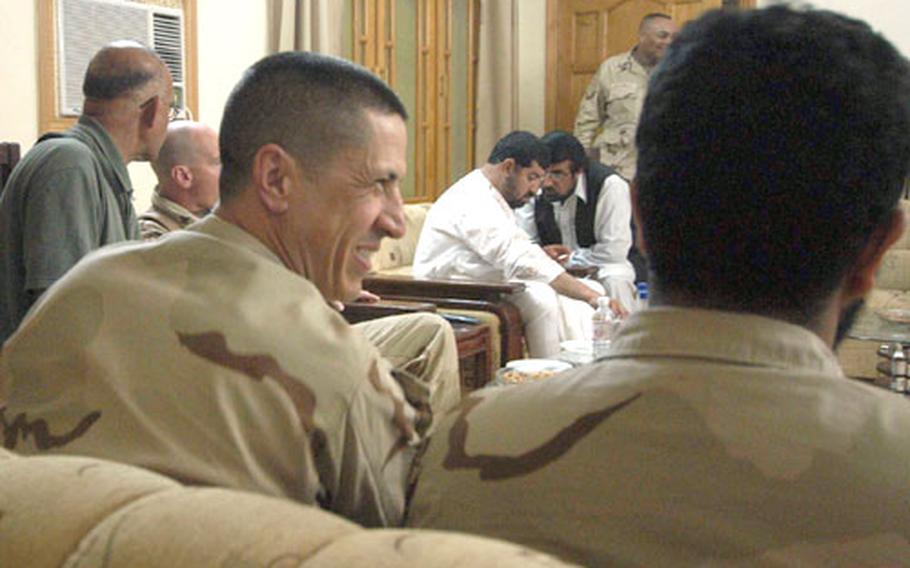 KANDAHAR AIRFIELD, Afghanistan &#8212; Sleeping in a huge, white tent filled with more than 100 cots isn&#8217;t exactly the perfect way to get a night&#8217;s sleep. But Pfc. Erick Gallardo doesn&#8217;t complain about the dozens of people who snore.

That doesn&#8217;t mean that Gallardo and other members of the 74th Infantry Detachment/Long Range Surveillance aren&#8217;t tired of the tent, though. They are eager to start their missions in Afghanistan.

Gallardo, Geis and hundreds of other soldiers from the 173rd Airborne Brigade are in Afghanistan preparing to take over operations in Regional Command-South from their 25th Infantry Division counterparts. Task Force Bronco, commanded by Col. Richard Pedersen, officially becomes Task Force Bayonet on Friday when the 173rd commander, Col. Kevin Owens, takes over.

Parts of the brigade have been operating in the country for weeks. The 1st Battalion, 508th Infantry Regiment was the first in the country and has been in charge of operations in Paktika province since March. Many soldiers from the 2nd Battalion, 503rd Infantry Regiment call Forward Operating Base Langham home. And &#8220;The Rock&#8221; has been running the show there for more than a week.

But other parts of the 173rd &#8212; such as the LRS, Combat Support Company and Headquarters and Headquarters Company &#8212; are either still training with their 25th ID counterparts or just starting their missions in Afghanistan.

&#8220;We are drawing up a project list right now,&#8221; said Capt. Dan Young, Combat Support Company commander. Most of his soldiers are engineers and soldiers who drive heavy machinery.

Spc. Matthew Haflett, who is starting his second tour in Afghanistan, said he doesn&#8217;t like being separated from his wife, Malea, in Vicenza, Italy. But he knows there&#8217;s a need in Afghanistan for someone who drives a scraper. Roads are not good and infrastructure is generally basic, at best.

Young said he&#8217;s sure there are more than enough small projects to keep his unit busy. He might miss one or two of them, though. His wife, Lori, is expecting a baby in late May. He&#8217;s one of at least five soldiers in his company who expect to have new additions to their families during their tour.

Sgt. Miguel Ortega&#8217;s wife, Anusa, is scheduled to give birth in August. Ortega is a mechanic assigned to the headquarters company. And, like the engineers, there&#8217;s plenty of work for a mechanic in Afghanistan. The roads are rough on vehicles, and the dust and heat are tough on everything else.

Spc. Carida Demeo, a military policewoman, has used some of those vehicles on patrol. One of the headquarters company&#8217;s military police squads found a weapons cache and she helped provide security while an explosive ordnance disposal team blew it up.

Sgt. Eddie Polk, an infantryman, said he&#8217;s not looking forward to the dust and high temperatures that the summer will bring.

Staff Sgt. Matthew Roberge said his initial impression of Afghanistan is better than that of Iraq.

KANDAHAR AIRFIELD, Afghanistan &#8212; Col. Kevin Owens, commander of the 173rd Airborne Brigade, and a dozen of his officers and top noncommissioned officers joined Col. Richard Pedersen and other leaders from Task Force Bronco for a Sunday night dinner at the home of Raziq Sherzai, an Afghan who lives just outside the airport perimeter.

Sherzai, the brother of the province&#8217;s governor, Gul Aga Sherzai, does a lot of business with the U.S. military. He owns a huge part of the &#8220;jingle truck&#8221; business that supplies bases around the province. He also helped supply the rocks that seem to be laid everywhere around base in an attempt to combat the dust.

Pedersen, who is scheduled to give up command of Regional Command-South to Owens in a ceremony Friday, thanked the Sherzai brothers and other local Afghan leaders for their support and handed them plaques that featured a sample ballot from the presidential election that took place during the 25th&#8217;s stint in the country.

Owens and his command will provide security for the country&#8217;s first parliamentary elections in September.