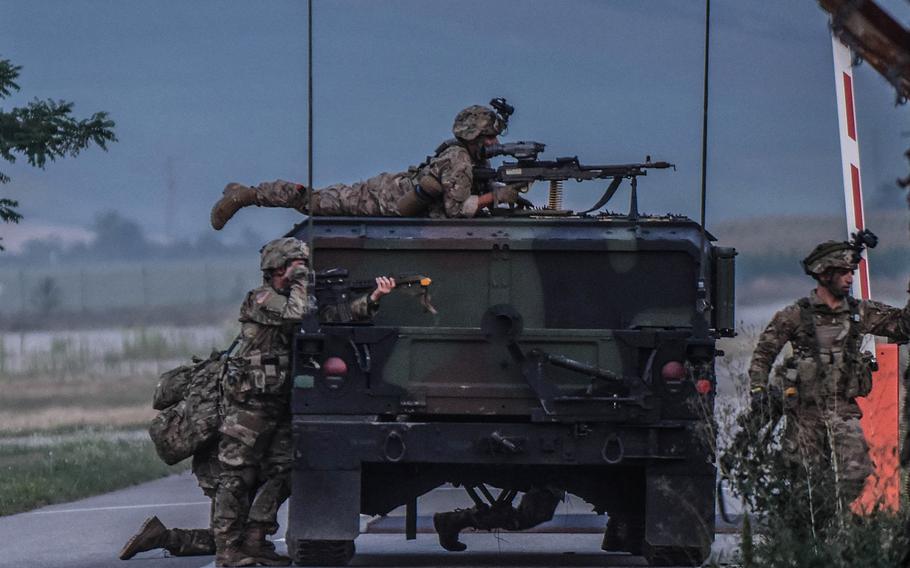 VICENZA, Italy – It was a given that the first U.S. troops dispatched to the Baltics to signal NATO resolve after Russia’s 2014 incursion into Ukraine would be the 173rd Airborne Brigade.

U.S. Army Europe’s only airborne brigade, the 173rd is tasked to be ready, willing and able to deploy rapidly — “to fight tonight,” as they like to say.

But after three years of deployments to the likes of Estonia, Latvia and Lithuania, and six months spent training the Ukrainian National Guard for combat – the 173rd is shifting south.

The arrival of a rotational armored brigade in Europe and the recent deployment of NATO’s multinational battle groups in the Baltics and Poland have triggered the 173rd’s new southern focus.

“That frees us up,” said Col. Greg Anderson, the 173rd’s former commander.

With more U.S. and NATO assets in the Baltics and Poland serving as a deterrent force to potential Russian aggression, the 173rd can focus on training efforts with allies farther south: countries in the Balkans and Black Sea region, Greece and even France.

The aim is to “build trust and interoperability with the allies we just haven’t been working with,” Anderson said shortly before turning over command earlier this month to his successor, Col. James Bartholomees.

But not just yet. Tensions to the north continue to tug some paratroopers back to that region even as the 173rd prepares to pick up the pace of its operations in the Balkans and elsewhere.

Last week, Lt. Gen. Ben Hodges, U.S. Army Europe commander, announced that 600 paratroopers with the 173rd would be heading to Latvia, Lithuania and Estonia in September. That six-week deployment — of the 1st Squadron, 91st Cavalry Regiment — would coincide with a Russian exercise, Zapad 2017, near NATO’s eastern flank.

The coming deployment was another occasion for the brigade to train with allies “and fight where we’re called,” Bartholomees said. “This is an opportunity. The squadron is excited to return.”

The brigade was still planning on doing more exercises with countries in central and southern Europe: USAREUR and the French army earlier this year agreed to a partnership between the 173rd and France’s 11th Parachute Brigade, which also specializes in air combat and air assault and is tasked with being a quick- reaction force.

The two brigades will participate in an exercise sometime in the next six months and work with a British airborne unit, Bartholomees said,

Bartholomees, three weeks into brigade command, most of that spent at USAREUR’s large annual exercise Saber Guardian, said his first impressions of the brigade matched its reputation.

“I’m very impressed with the professionalism and aggression of our Sky Soldiers,” he said. “It’s awesome to see it and be a part of it.”