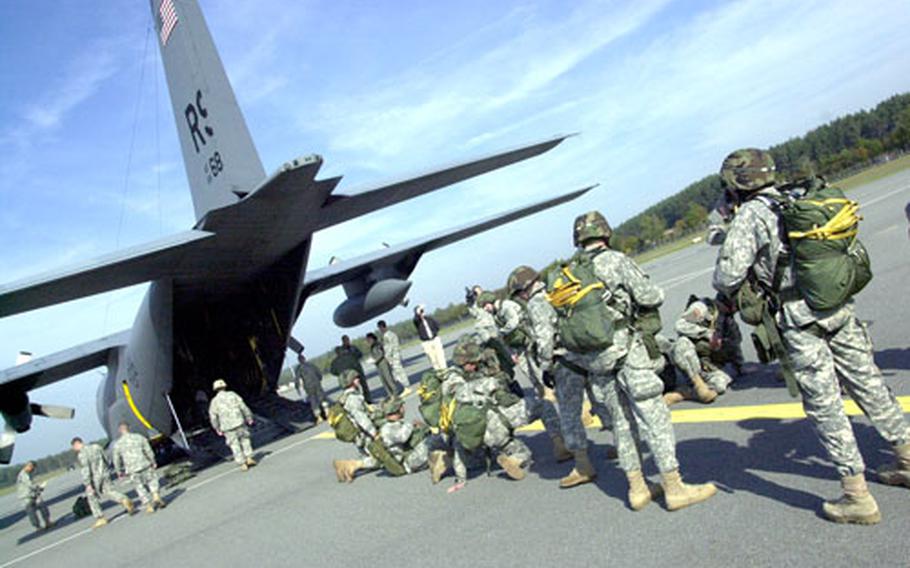 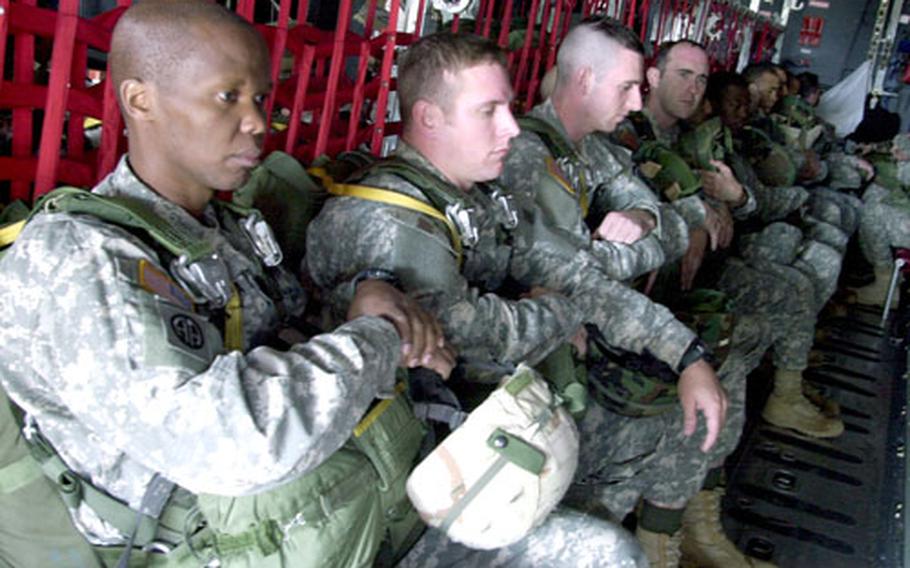 Hundreds of soldiers from the 173rd&#8217;s 4th Battalion, 319th Airborne Field Artillery Regiment boarded a C-130 transport at Grafenw&#246;hr Army Air Field on Tuesday and parachuted into a drop zone inside the training area.

The brigade&#8217;s deputy commander, Col. Sean Callahan, 43, of Norwalk, Conn., said hundreds of other 173rd soldiers will jump over the next two weeks.

&#8220;It is a milestone for us that we are doing our first airborne operation since becoming an ABCT (Airborne Brigade Combat Team),&#8221; he said.

This year, the brigade more than doubled in size, adding three Germany-based battalions to its forces in Vicenza, Italy. Many of the new troops came from nonairborne units, Callahan said.

&#8220;We have been sending folks to jump school, but there are still a large number of nonairborne qualified people in the brigade,&#8221; he said, adding that troops from the unit will continue to travel to Fort Benning, Ga., in small groups in coming months to qualify for airborne operations.

One of the young soldiers jumping with 4-319 for the first time was Pvt. Orlando Garcia, 18, of Albuquerque, N.M. Garcia, who joined the Army in February, said he&#8217;d parachuted five times at airborne school but was jumping for the first time in an airborne operation.

When he exits the aircraft, Garcia said, he yells &#8220;airborne&#8221; and thinks about not landing in a tree and what he will do if his parachute doesn&#8217;t open: pull his rip cord to release his reserve chute.

One of the old hands helping supervise the young paratroops, Sgt. Maj. Michael Kennedy, 38, of Ruskin, Fla., said he&#8217;d been jumping for 17 years.

The squadron, which was recently reactivated for the first time since World War II, will conduct its first airborne operation later this week, he said.

A mixture of experienced jumpers in each of the newly airborne units should help soldiers get used to their roles. For example, Kennedy&#8217;s experience includes a 25,000 feet oxygen assisted jump that involved a 90 second freefall as well as a combat jump in Panama.

&#8220;It was at night with heavy equipment and under fire at 450 feet. That was my first time in combat. Combine that with jumping. You could say it was an adrenaline rush,&#8221; he recalled.

Next week the 173rd will launch a much larger airborne operation out of Ramstein Air Base that will involve up to six C-130s dropping troops on Grafenw&#246;hr, Kennedy said.