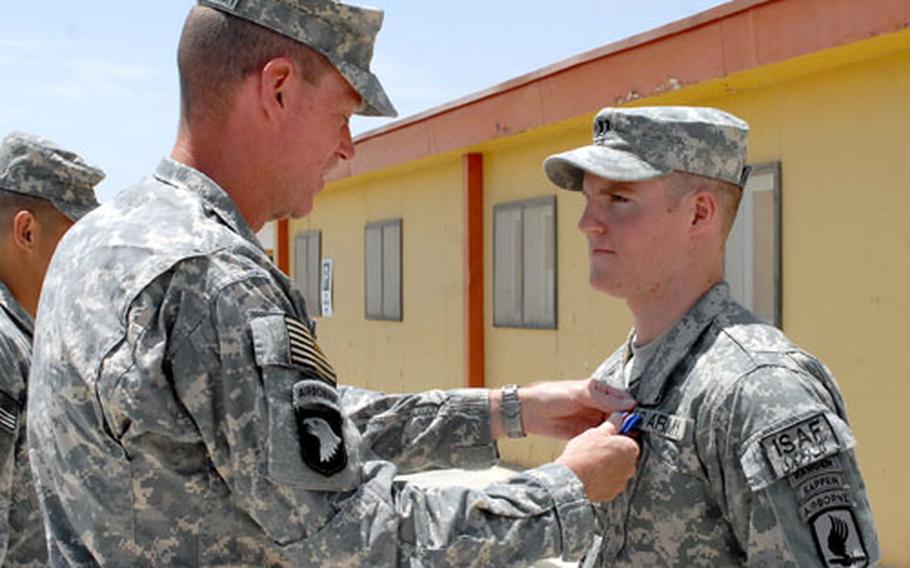 A 173rd Airborne Brigade Combat Team officer was given the Silver Star during a short ceremony Saturday at Bagram Airfield, Afghanistan.

Capt. William G. Cromie received the nation&#8217;s third-highest honor for valor during combat for his actions during an ambush on Nov. 16, 2007, according to an Army news release.

Last November, Cromie was acting as a platoon leader in Company A, 173rd Special Troops Battalion, in the Kunar province in eastern Afghanistan when he and his men received word that there was a possible roadside bomb placed in their area. They were sent to investigate, according to a Combined Joint Task Force &#8211; 101 press release.

"While traveling down the road, our first vehicle struck a [roadside bomb]," Cromie said in the release. "Immediately, we were ambushed on three sides by heavily armed militants."

When two of his men &#8212; who&#8217;d managed to position themselves to provide covering fire for the platoon &#8212; became pinned down and began running out of ammunition, Cromie secured more rounds and ran through a crossfire to resupply them, the release stated.

The men called for air support and went on the offensive, causing the enemies to retreat to a fortified compound, the release said. The paratroops then cleared the compound and neutralized the threat.

"I really would like to thank the squad leaders, they really acted professionally even under a stressful situation like that, and the guys in 3rd Platoon for their bravery," Cromie said in the release.