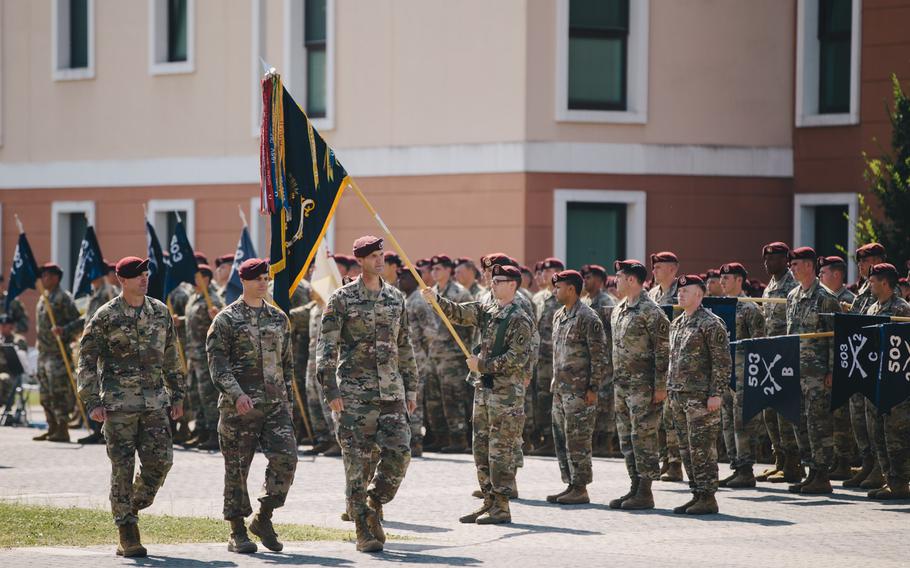 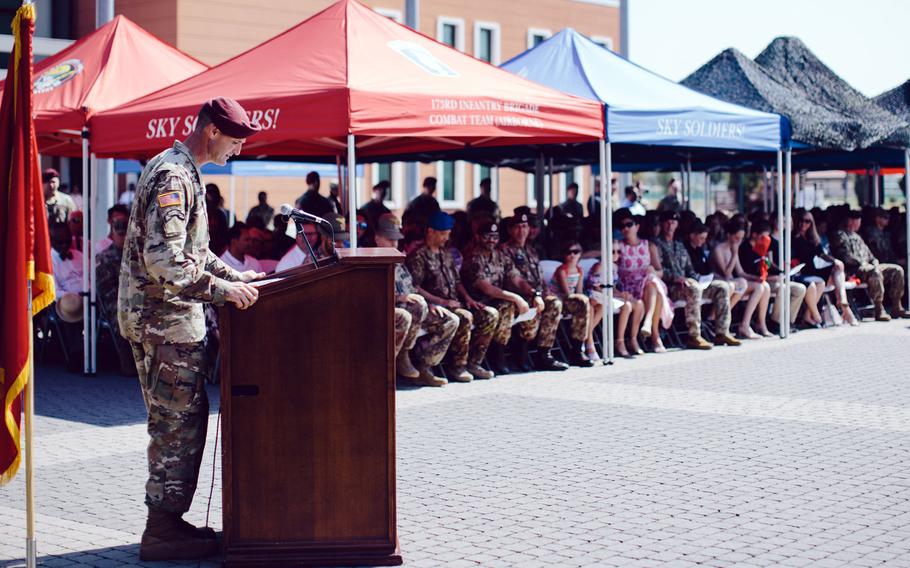 Col. James Bartholomees, ending his two years of command of the 173rd Airborne Brigade, addresses the crowd at the change of command ceremony on Thursday, June 27, 2019, at Del Din in Vicenza, Italy. Bartholomees said he doubted he'd ever have a better job. (U.S. Army) 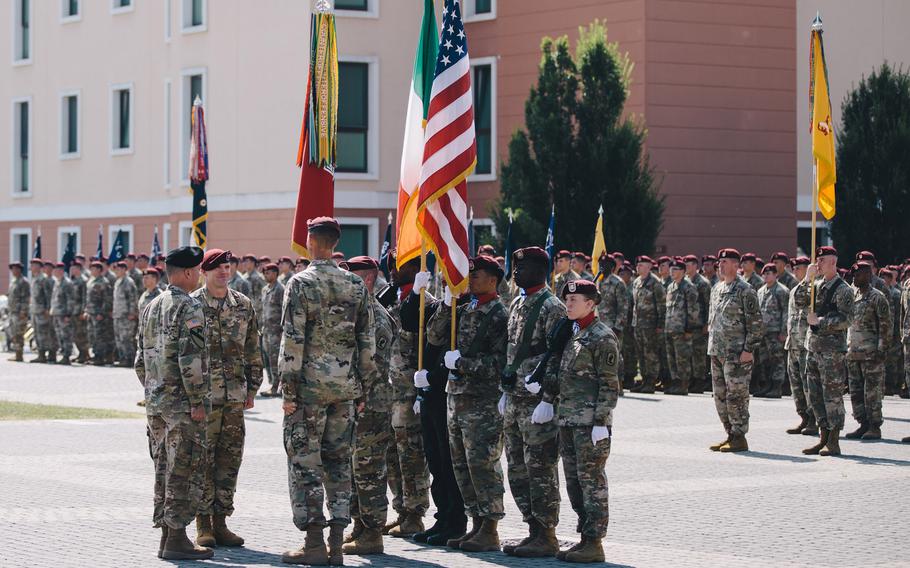 Just out of a stint at the Army War College after commanding the 2nd Battalion, 75th Ranger Regiment, his last three postings were the same as Col. James Bartholomees’ were when he took brigade command two years ago. It was “a privilege and a blessing to be once again following in your footsteps,” Burgess told Bartholomees at Thursday’s change of command ceremony at Del Din.

Bartholomees was looking ahead to a change of pace after the change of command.

After 24 years in the Army, 11 combat deployments to Iraq and Afghanistan, command at battalion, regiment and brigade level, “It’ll be my first experience in the Pentagon,” he said.

He’s to be executive officer to Lt. Gen. Walter Piatt, the director of Army staff. Asked if he’d been given advice about working at the Pentagon, he said he’s been told it’s “all about relationships and building teams.”

Commanding the 173rd Airborne Brigade, said Bartholomees, had been, and was sure to be, the best job of his career. “The autonomy, the mission, the focus. This is the pinnacle,” he said. “I feel like I won the lottery with this job.”

He said he was fortunate to arrive at the brigade as NATO allies had stepped up rotations into the Baltics, following the 173rd’s initial deployments there in 2014 to reassure allies after Russia annexed Crimea. That freed up the brigade’s battalions to train more collectively and cohesively.

“Instead of sending small units to places, we were able to come together and do larger training,” he said. The convergence of some 4,000 troops - American, Italian, Dutch, British and French - for war games at the training center in Hohenfels was a highlight of 2017, Bartholomees said. “You get to test all your warfighting functions in fighting against a near peer challenge,” he said. “It opened our eyes, no kidding, to what deterrence looks like.”

Another exercise, Saber Junction, is coming up in September. “It hurts me not to be able to lead the brigade that one last time,” he said.

The troops were designed, equipped and trained, Bartholomees said, “to deter our enemies from making a move that they will soon regret.”

They were, Burgess said, “a cohesive team of fit, disciplined and competent paratroopers who tirelessly prepare themselves to deploy at a moment’s notice, to accomplish any assigned mission and to destroy any foe.”

But he noticed a deficiency during The Army Song singalong at the ceremony’s end.

“They can’t hold a tune, but I assume they can fight,” Burgess said.