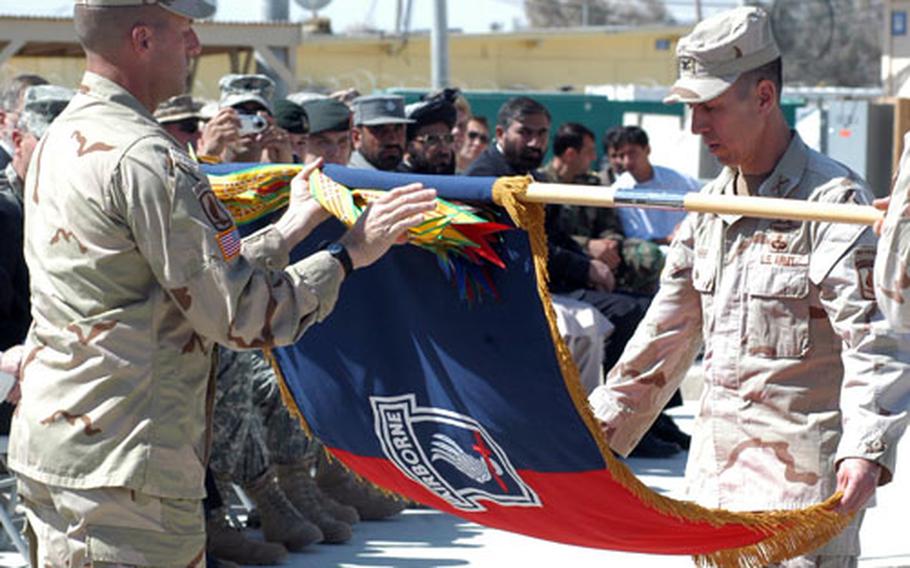 KANDAHAR AIRFIELD, Afghanistan &#8212; The 173rd Airborne Brigade didn&#8217;t come to Afghanistan looking for a little quiet time. Which is fortunate, because the Sky Soldiers didn&#8217;t find any heading up coalition efforts in Regional Command-South.

The brigade&#8217;s tour, featuring months of heavy fighting in the territory it was responsible for, officially ended in a transfer of authority ceremony Tuesday. Some elements, such as the 2nd Battalion, 503rd Infantry Regiment, still have weeks to serve in the country. But the bulk of the Southern European Task Force (Airborne) is now either back in or headed back to Italy.

Col. Kevin Owens, who commands the brigade, said Task Force Bayonet made headway across a number of fronts, though most attention has focused on a series of battles regarded as some of the fiercest fighting since the 2001 invasion that drove the ruling Taliban from power.

The fighting &#8212; and the deaths of 17 U.S. soldiers in the sector in the last year &#8212; have led some to believe the situation in the country is getting worse. But, shortly after handing over authority to an international brigade led by Canadian Brig. Gen. David Fraser, Owens said he&#8217;s not among them.

&#8220;I think we have been much more aggressive in getting out to the areas we identified as traditional strongholds of the enemy,&#8221; Owens said.

Owens said much of the heavy fighting came early in the rotation. Enemy forces took heavy casualties, he said, and don&#8217;t often look to engage American troops in open battles now. Instead, they&#8217;ve increasingly relied on tactics such as roadside bombs and suicide attacks.

Or, he said, funding a trade school for locals to learn job skills. Helping a governor meet the needs of the people he represents. Empowering women. Getting ethnic groups to get along.

Owens said one of the task force&#8217;s most important achievements was building the Afghan security forces. One Afghan National Army brigade has been in Zabol province since August, another is based in Kandahar and a third should stand up in Helmand province about the same time as British forces move in.

Maj. Gen. Benjamin Freakley, the new commander of Combined Joint Task Force-76, praised the task force&#8217;s work in comments he made during the ceremony.

&#8220;You take a well-deserved reputation of duty well-performed back with you to Italy,&#8221; he said, adding that the people in southern Afghanistan &#8220;are stronger because of your efforts.&#8221;