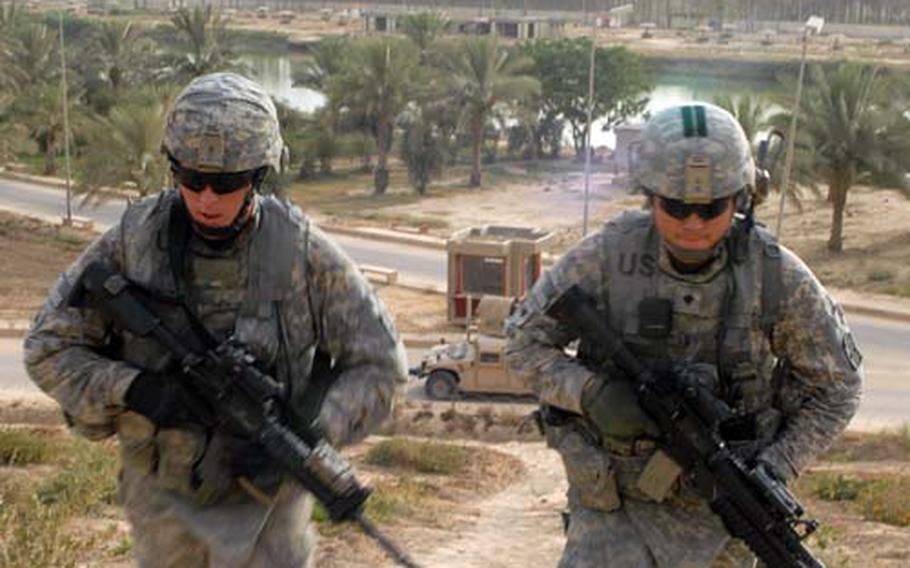 ISKANDARIYAH, Iraq &#8212; Troop levels are falling rapidly in rural areas south of Baghdad even as the United States prepares to withdraw forces from Iraqi cities.

The 172nd Infantry Brigade, which patrolled the northern half of Babil province when it arrived in October, now oversees all of Babil along with Najaf, Karbala and Qadisiyah provinces, according to Maj. Richard Brown, a Reserve officer who runs the 172nd&#8217;s civil affairs group.

The brigade will add Wasit province, bordering Iran, to its area of operations next month, said Brown, who teaches ROTC at Cornell University when he&#8217;s not deployed.

"We went from having half a province with an entire brigade to, a year later, by the time [the 172nd leaves], five provinces," Brown said. "That&#8217;s a huge responsibility for terrain."

About 3,000 U.S. soldiers will leave Wasit province in the coming weeks, with an additional 350 departing Babil, according to the 172nd&#8217;s operations officer, Maj. Erik Krivda.

The battalion now has three task forces each patrolling areas that were once covered by brigades.

Most of the 172nd&#8217;s bases are outside urban areas and unaffected by the withdrawal of U.S. forces from cities. However, with violence declining, troops will pull out of several bases, including four joint security stations in Wasit province and a hotel that has served as a headquarters for civil affairs work in the city of Hillah, Krivda said. The drawdown in U.S. forces reflects declining violence in the south.

During the brigade&#8217;s last deployment, to Baghdad from 2006 to 2008, the unit, then known as the 2nd "Dagger" Brigade, lost dozens of soldiers killed in action. This time, only two soldiers have been killed &#8212; a single member of the 172nd and a military policeman assigned to the brigade, both by roadside bombs, Krivda said.

During the deployment, soldiers with the brigade have detained two insurgents planting a bomb and killed two others who attacked American soldiers. Five of the brigade&#8217;s vehicles have been damaged by roadside bombs, and its area of operations has seen two suicide bombings and a marketplace car bomb.

"The suicide bombers were al-Qaida trying to spark violence, but there were no reprisals," Krivda said. "The car bomb, we think, was a tribal dispute. In all three incidents, Iraqi security forces took care of things on their own."

Interpreters working with the brigade warn that the militias remain strong and will try to seize power when the Americans leave.

Violence in Babil was concentrated in the Jurf al-Sakhr area, just south of Baghdad. The area is a Sunni-Shiite fault line, which borders Anbar province and the "Sunni Triangle," Brown said.

But attacks by Sunni insurgents against pilgrims visiting the Shiite religious shrines at Karbala and Najaf have also declined, he said.

The drop-off in violence means troops have more time for reconstruction projects and humanitarian assistance programs and to provide emergency response, he said. The brigade works with provincial reconstruction teams staffed by State Department experts to help run projects that aren&#8217;t funded by the Iraqi government. Soldiers also work to get local government officials involved in the community, Brown said.

"It is the biggest market of its kind south of Baghdad and north of Karbala," he said. "The market is owned by both Sunni and Shiite, and we expect it to be a profitable business."

If the project works, it could be replicated in Anbar and Najaf, he said.

"We have a deadline [for the withdrawal of U.S. forces] of 2011," Brown said, "but there are some things that we are doing that will still be here in six or 16 years."