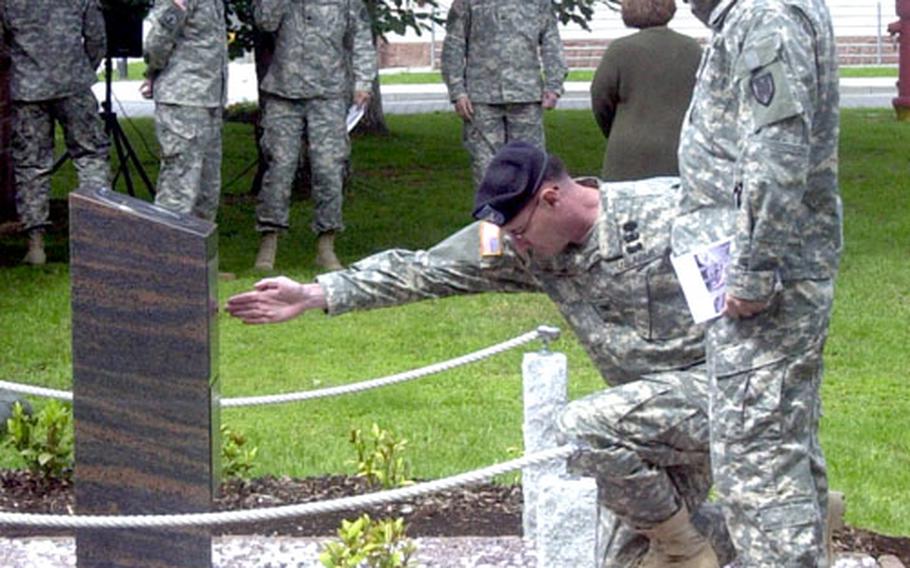 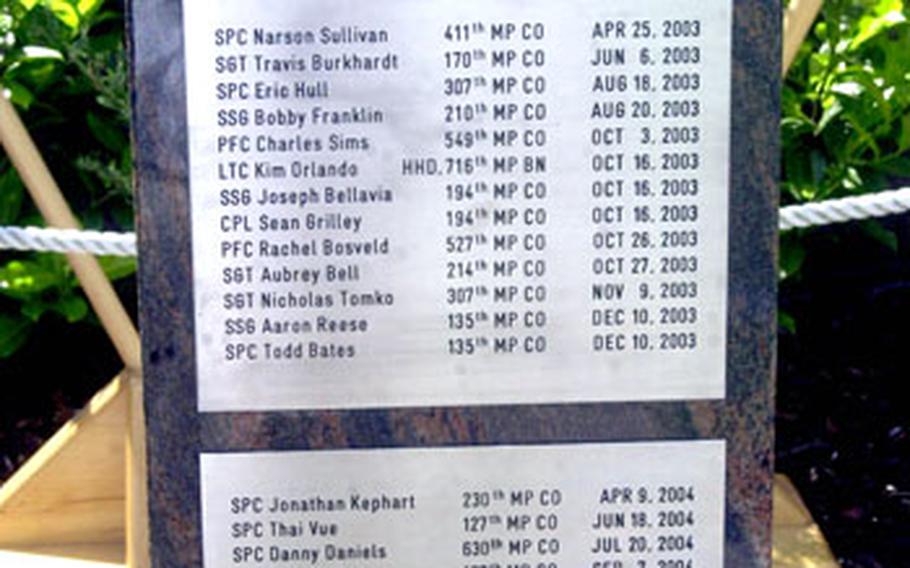 A Wednesday ceremony honored 17 soldiers whose names were added to the memorial. (Steve Mraz / S&S)

Without uttering a word, Johnson conveyed his deep respect for McNaughton, a 27-year-old soldier attached to the Mannheim-based 18th Military Police Brigade during its deployment to Iraq last year. McNaughton, a former New York City policeman who responded to the Sept. 11, 2001, attacks, was killed Aug. 2 by sniper fire in Baghdad.

In a ceremony Wednesday at the Coleman Barracks Annex, the 18th MP Brigade unveiled McNaughton&#8217;s name and the names of 16 other troops that were added to its fallen soldiers memorial. The troops, including an airman, who were added to the existing memorial all paid the ultimate sacrifice for their country while serving under the 18th MP Brigade in operations Iraqi and Enduring Freedom from April 2004 to November 2005.

Dozens of soldiers attended Wednesday&#8217;s ceremony and paid their respects to the dead by saluting or touching the memorial. Taps was played in a tribute to the fallen.

Col. James Brown, commander of the 18th MP Brigade, described Wednesday as a solemn and sacred day in the brigade&#8217;s history.

&#8220;Their names here record their presence in our ranks forever and mark their personal service and sacrifices for our freedom and future,&#8221; he said. &#8220;There is no greater servant or guardian of freedom than the American soldier.&#8221;

The valor and courage displayed by soldiers on a daily basis defies Brown&#8217;s description, he said.

&#8220;I&#8217;ve seen our soldiers suit up daily for battle in 130-degree heat, bearing 60 pounds of equipment, an indestructible will, sense of humor, faith in their fellow comrades and faith in their God,&#8221; Brown said. &#8220;They have ridden forth day after day in an effort to protect the emergent, free and democratic governments of Afghanistan and Iraq.&#8221;

The fallen memorialized Wednesday will not be forgotten, Brown said.

&#8220;This monument is not only a testimony to the service of our fallen heroes,&#8221; he said. &#8220;It is a testimony of the enduring will and white-hot commitment that we have in our hearts to never forget them nor their acts of bravery.&#8221;