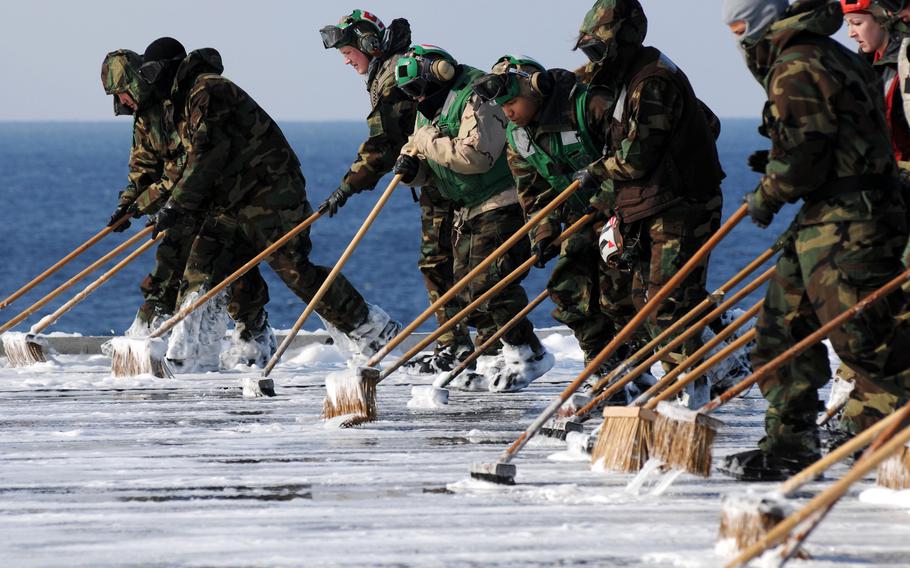 Sailors scrub the flight deck aboard the aircraft carrier USS Ronald Reagan following a countermeasure wash down to decontaminate the flight deck while the ship is operating off the coast of Japan on March 23, 2011. The Reagan, along with 15 other ships that took part in the relief effort, still have some radiation contamination more than five years later, the Navy says. (U.S. Navy photo)

Sailors scrub the flight deck aboard the aircraft carrier USS Ronald Reagan following a countermeasure wash down to decontaminate the flight deck while the ship is operating off the coast of Japan on March 23, 2011. The Reagan, along with 15 other ships that took part in the relief effort, still have some radiation contamination more than five years later, the Navy says. (U.S. Navy photo) 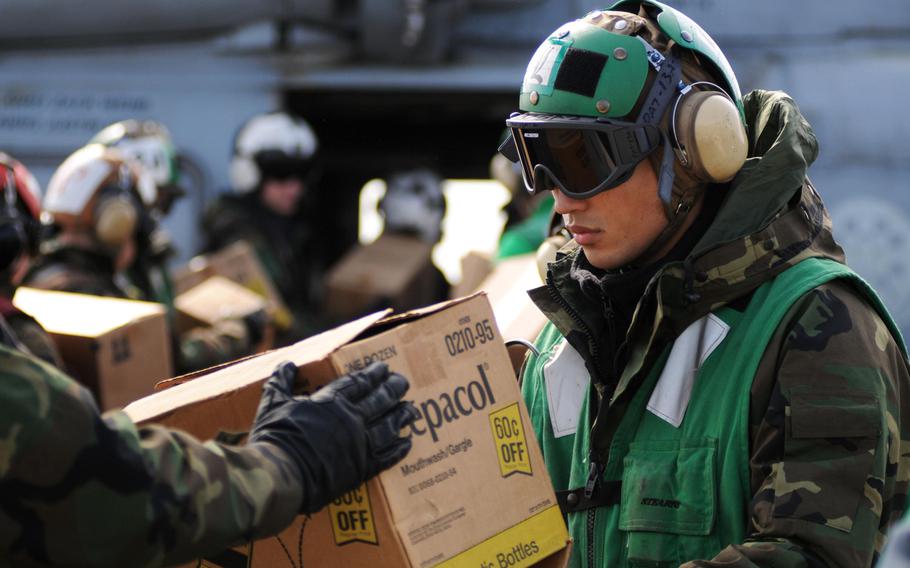 A U.S. sailor loads humanitarian assistance supplies onto an SH-60F Sea Hawk aboard the aircraft carrier USS Ronald Reagan on March 21, 2011. The Reagan, along with 15 other ships that took part in the relief effort, still have some radiation contamination more than five years later, the Navy says. Sailors aboard the ships, however, are not in any danger. (U.S. Navy photo)

The Ticonderoga-class guided-missile cruiser USS Chancellorsville was one of the 25 Navy or Military Sealift Command ships that took part in Operation Tomodachi, following the March 11, 2011, earthquake and tsunami in Japan. Five years later, 16 of the ships still have some level of radiation contamination, the Navy has said. (U.S. Navy photo) 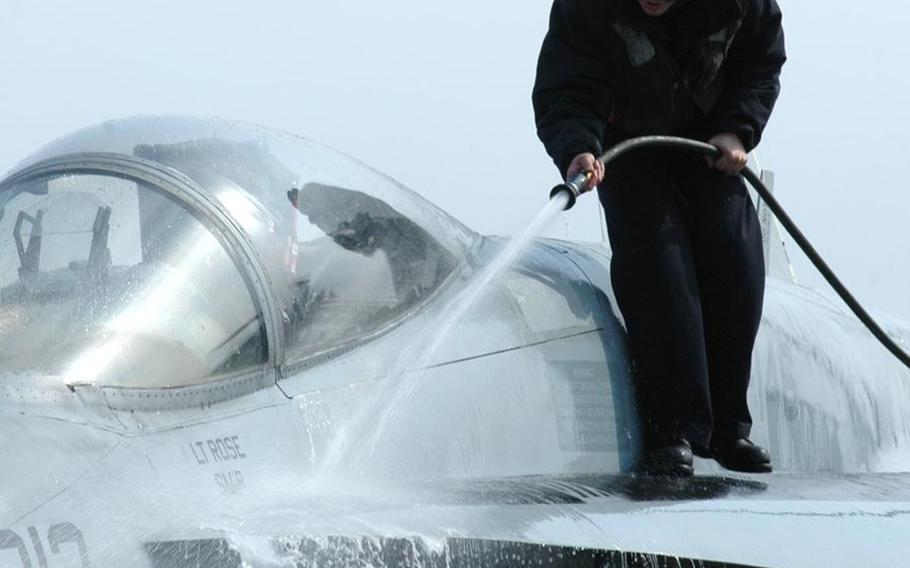 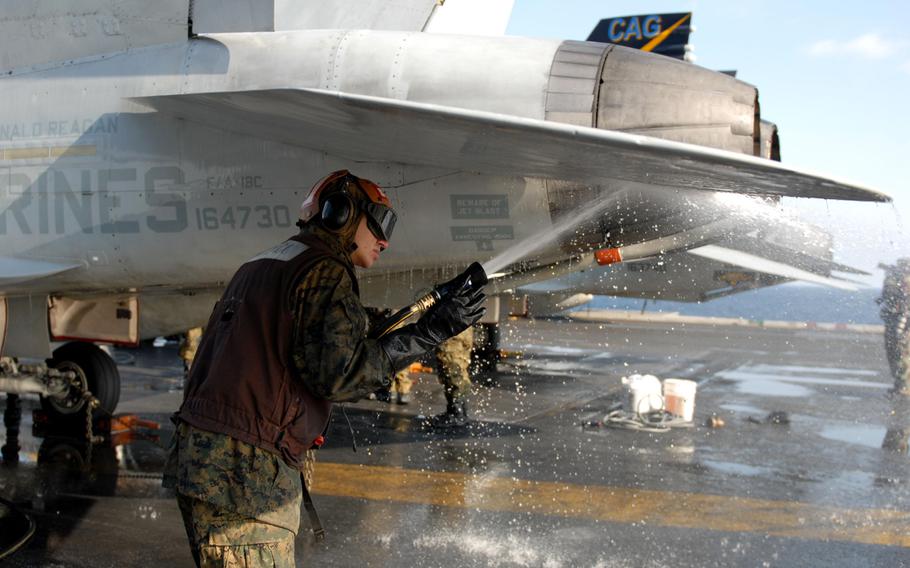 A U.S. Marine sprays the surface of an F/A-18C Hornet aboard the aircraft carrier USS Ronald Reagan during a countermeasure wash down on the flight deck in March 2011. The Reagan, along with 15 other ships that took part in the relief effort, still have some radiation contamination more than five years later, the Navy says. Sailors aboard the ships, however, are not in any danger. (U.S. Navy photo) In all, 25 ships took part in Operation Tomadachi, the name given for the U.S. humanitarian aid operations after the magnitude-9.0 earthquake and subsequent tsunami on March 11, 2011. The tsunami, whose waves reached runup heights of 130 feet, crippled the Fukushima plant, causing a nuclear meltdown.

In the years since the crisis, the ships have undergone cleanup efforts, the Navy said, and 13 Navy and three Military Sealift Command vessels still have some signs of contamination, mostly to ventilation systems, main engines and generators.

“The low levels of radioactivity that remain are in normally inaccessible areas that are controlled in accordance with stringent procedures,” the Navy said in an email to Stars and Stripes. “Work in these areas occurs mainly during major maintenance availabilities and requires workers to follow strict safety procedures.”

All normally accessible spaces and equipment aboard the ships have been surveyed and decontaminated, Vice Adm. William Hilarides, commander of Naval Sea Systems Command, wrote to Stars and Stripes.

“The radioactive contamination found on the ships involved in Operation Tomodachi is at such low levels that it does not pose a health concern to the crews, their families, or maintenance personnel,” Hilarides said.

The largest U.S. ship to take part in the relief operation was the USS Ronald Reagan aircraft carrier, which normally carries a crew of more than 5,000 sailors. In 2014, three years after the disaster, the Reagan’s ventilation system was contaminated with 0.01 millirems of radiation per hour, according to the Navy. Nuclear Regulatory Commission guidelines advise no more than 2 millirems of radiation in one hour in any unrestricted area, and 100 millirems total in a calendar year from external and internal sources in unrestricted and controlled areas, so full-time exposure on the Reagan would be below that.

Plume of radiation In the days after the tsunami hit the Fukushima complex, the plant suffered multiple explosions and reactors began to melt down.

Officials from the NRC told Congress that extremely high levels of radiation were being emitted from the impaired plant. Japanese nuclear experts said winds forced a radioactive plume out to sea, and efforts to keep fuel rods cool using sea water caused tons of radiated water to be dumped into the ocean.

The Reagan was dispatched to take part in relief efforts, arriving the next day. Navy officials say the Nimitz-class nuclear-powered supercarrier stayed at least 100 nautical miles away from the damaged plant, but many sailors have disputed the Navy’s accounting, saying they were so close that they could see the plant.

The Navy has acknowledged that the Reagan passed through a plume of radiation. Navy images showed sailors with their faces covered, scrubbing the deck of the Reagan with soap and water as a precautionary measure afterward. The Reagan and sailors stayed off the coast of Japan for several weeks to aid their Japanese allies.

The multibillion-dollar ship, projected to last at least 50 years after its launch in 2001, then was taken offline for more than a year for “deep maintenance and modernization” at the Puget Sound Naval Shipyard and Intermediate Maintenance Facility in Bremerton, Wash., according to Navy officials.

“Procedures were in place to survey, control and remove any low-level residual contamination,” the Navy said. “Personnel working on potentially contaminated systems were monitored with sensitive dosimeters, and no abnormal radiation exposures were identified.”

Upgrades and cleaning also took place at the ship’s next stop in San Diego.

Sailors who performed the work said it entailed entering spaces deep within the ship, testing for high levels of radiation, and if it was found, sanding, priming and painting the areas. They say there were given little to no protective gear, a claim that the Navy denies.

Of the 1,360 individuals aboard the Reagan who were monitored by the Navy following the incident, more than 96 percent were found not to have detectable internal contamination, the Navy said. The highest measured dose was less than 10 percent of the average annual exposure to someone living in the United States.

Radiation effects unknown Experts differ on the effects of radiation in general and, specifically, for those involved in Operation Tomodachi.

Eight Reagan sailors, claiming a host of medical conditions they say are related to radiation exposure, filed suit in 2012 against the nuclear plant’s operator, the Tokyo Electric Power Co. The suit asserts that TEPCO lied, coaxing the Navy closer to the plant even though it knew the situation was dire. General Electric, EBASCO, Toshiba Corp. and Hitachi were later added as defendants for allegations of faulty parts for the reactors.

A spokesman for TEPCO declined to comment for this story because of the sailors’ lawsuit, which was slated to go forward pending appeals in the U.S. 9th Circuit Court of Appeals.

The illnesses listed in the lawsuit include genetic immune system diseases, headaches, difficulty concentrating, thyroid problems, bloody noses, rectal and gynecological bleeding, weakness in sides of the body accompanied by the shrinking of muscle mass, memory loss, leukemia, testicular cancer, problems with vision, high-pitch ringing in the ears and anxiety.

The list of sailors who have joined the lawsuit, which is making its way through the courts, has grown to 370.

After a peer-reviewed study into the levels of exposure, Woodson reported back to Congress, defending the military’s response and safeguards.

Any illnesses that sailors have developed since the operation are not a result of the relief campaign, he said.

“There is no objective evidence that the sailors … experienced radiation exposures that would result in an increase in the expected number of radiogenic diseases over time,” Woodson wrote. “The estimated radiation doses for all individuals in the Operation Tomodachi registry, including sailors on the USS Ronald Reagan, were very small and well below levels associated with adverse medical conditions.”

Furthermore, Woodson said, more sailors would have been sick if the levels were high enough to cause the illnesses cited. There were upward of 5,000 sailors aboard the Reagan at the time of the operation. He also said symptoms developed too early to be associated with the operation.

But Shinzo Kimura — a professor at Dokkyo Medical University in Japan who has studied radiation exposure from Hiroshima and Nagasaki to Chernobyl and, now, Fukushima — said it wasn’t too early for sailors to show symptoms of exposure-related conditions. Doctors have seen conditions in children living near the plant that surfaced earlier than would normally be expected.

Kimura, hired by the Nihonmatsu city government for his expertise in the field, was the first scientist on the ground taking readings in the wake of the Fukushima disaster. He said each person and the way their body is affected by radiation is different.

While unable to definitively say if the sailors were sickened by the radiation, Kimura reasoned that the levels aboard the Reagan were high enough to cause illnesses. Otherwise, he said, why go through the bother of repeated cleanings to lower radiation levels?

“It is impossible to speculate or calculate how much the doses were before the two decontamination works,” he said. “The U.S. military is very good at risk-management. Considering that, it is assumed that decontaminations were conducted twice because the levels were not favorable.”