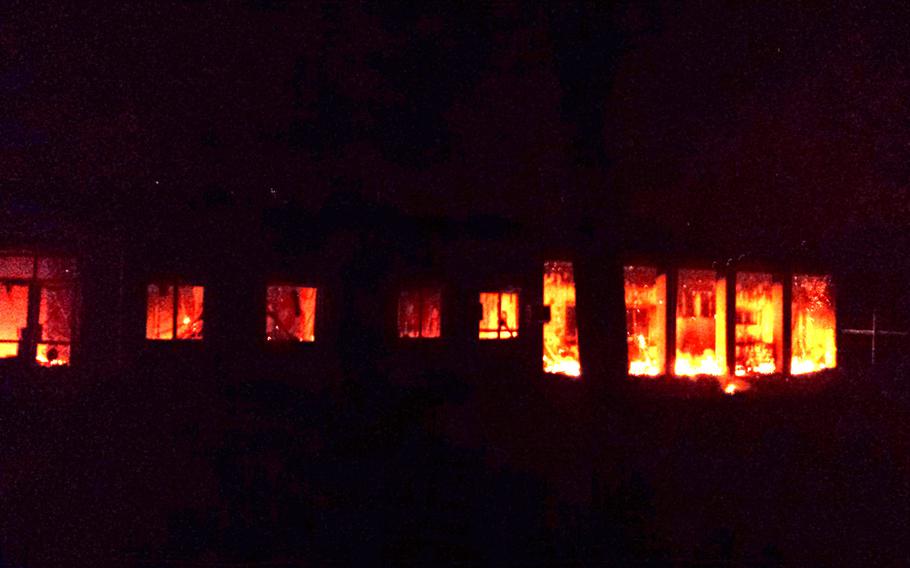 A hospital run by Doctors Without Borders burns after being struck by bombs during fighting in Kunduz, Afghanistan, early on Saturday, Oct. 3, 2015. ()

WASHINGTON – The Pentagon has punished 16 military personnel for an airstrike last year on a Doctors Without Borders medical facility in Afghanistan that killed 42 civilians, including doctors and patients.

The results of the investigation into the Oct. 3, 2015, airstrike in Kunduz were announced Friday by Gen. Joseph Votel, commander of U.S. Central Command.

For 12 of the 16 personnel, which included members of the AC-130U gunship aircrew that fired on the hospital, a general officer and a U.S. special forces unit that was on the ground and identified the target, the punishments included suspension and removal from command, letters of reprimand, formal counseling and extensive retraining, according to a letter released Friday by the Pentagon that outlined the results of the investigation.

Three aircrew members still face recertification boards that will determine whether they are eligible to be returned to flight status. Votel said those crewmembers have not flown since the incident and their recertification is still in progress.

The hospital airstrike occurred in the early morning hours of Oct. 3 as Afghan forces battled Taliban insurgents, who had overrun Kunduz on Sept. 28, 2015, and briefly held the city of 300,000. Fourteen staff members, 24 patients and four caretakers were killed, according to Doctors Without Borders, which goes by its French initials MSF.

In the days after the attack, President Barack Obama apologized, and Defense Secretary Ash Carter said he would hold personnel accountable if an investigation showed U.S. culpability in the airstrike.

The Pentagon has concluded the personnel did not know they were striking a medical facility, therefore the charges against them fell short of a war crime.

Instead, Votel said Friday the incident was the result of a string of communication and operational breakdowns that occurred as U.S. and Afghan forces were on their fourth day of firefights against the Taliban in the area. The area was unusually hostile, he said.

“This was an extraordinarily intense situation,” Votel said, noting the aircrew had to evade a surface-to-air missile that was shot at them shortly after they reached the target. “That’s a very significant thing. That does not happen very often in Afghanistan.”

The hospital was marked on a “no strike list” database, though the crew flying the mission did not have access to that database during the attack. The flight crew launched in response to an emergency call, which resulted in it taking off 69 minutes earlier than planned and kept it from receiving all of the information that they would normally process before takeoff, Votel said.

Afghan forces provided the correct grid coordinates for the Taliban building that the gunship intended to strike, but the onboard system on the AC-130 malfunctioned and the system directed the crew to an open airfield instead. The investigation found one crewmember did identify the correct Taliban target but the aircraft was redirected to the hospital.

The Pentagon said it would not release names of the personnel to protect their privacy and because some of them are still serving overseas. The Defense Department has provided $5.7 million in funds to rebuilt the hospital. It also has paid between $3,000 and $6,000 to an estimated 170 people who were killed, injured or otherwise affected by the airstrike.

A letter of reprimand is an administrative punishment that indicates misbehavior and can block promotions or have career-ending consequences. It does not involve criminal charges.

MSF has called the attack on the hospital a war crime and has repeatedly called for an independent inquiry.

“We still think that it would obviously be best to have an independent investigation,” said Kate Stegeman, a spokeswoman for the group in Kabul. She said MSF had not gotten any feedback from the United States.

In March, shortly after taking charge of the forces in Afghanistan, Gen. John W. Nicholson apologized for the destruction of the hospital and the many deaths caused by the airstrike.

“I grieve with you for your loss and suffering, and humbly and respectfully ask for your forgiveness,” he told the people of Kunduz during a visit there with his wife last month.

A Pentagon investigation in November, one of at least three performed in the wake of the attack, stated the incident was the result of “avoidable human error, compounded by process and equipment failures.” Investigators found a series of errors led the American forces to confuse the hospital with an Afghan intelligence headquarters building reportedly occupied by Taliban fighters.

The organization conducted its own investigation, which concluded there were no armed combatants in the hospital at the time of the airstrike and no fighting “from or in the direct vicinity” of the facility. MSF also has said it had informed all armed groups involved in the conflict of its GPS coordinates and its neutrality under international humanitarian law.

The group has repeatedly called for an independent inquiry by the International Humanitarian Fact-Finding Commission, a permanent body set up under the Geneva Conventions to investigate apparent violations of international humanitarian law. More than 550,000 people have signed an online petition calling on the Obama administration to consent to the commission’s investigation.

In a separate report last December, United Nations investigators found nothing to indicate the hospital had done anything to lose its protected status under international law. Even if U.S. troops did not knowingly target the hospital, they still could have committed war crimes if they did not take precautions to protect civilians, the report stated.