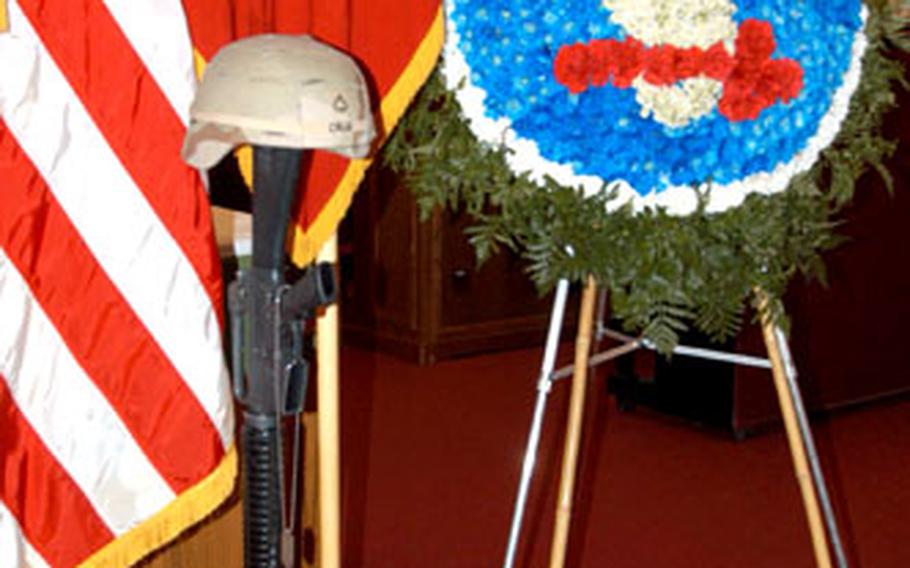 Memorial services at Caserma Ederle for servicemembers killed in Afghanistan have been all too common this year. Sixteen members of the Southern European Task Force (Airborne) have died since the unit took command of Combined Joint Task Force-76 in March. (Kent Harris / S&S)

The scene is a familiar one.

Leaders from the Southern European Task Force (Airborne) Rear Detachment fill in the front rows of the base chapel on the left side. On the right, small groups of women sit together, many clutching tissues to dab at reddened eyes. Somber community members, whispering in English or Italian, fill in the middle and back rows. Surrounding them is a sea of green-clad servicemembers with the occasional desert-camouflage uniform sticking out.

Sixteen soldiers based at Caserma Ederle have died since SETAF took command of Combined Joint Task Force-76 in Afghanistan on March 15. Sixteen soldiers in less than eight months from a community with an active-duty population of a little more than 3,000.

Some are more difficult than others. Twice, the community has held services for four soldiers killed at the same time. The first four were killed in a helicopter crash April 6. The second group by a roadside bomb Aug. 21.

Horn said spouses know what they&#8217;re getting into when they marry a servicemember &#8212; or they learn very quickly. She said thinking about the potential danger her husband is facing would drive her crazy.

It&#8217;s that kind of attitude, combined with what all of those interviewed characterize as a strong support network, that pervades the community.

That includes the bad times, she said. Battery D has lost one soldier. Cpl. Manuel Hernandez was killed in a rocket attack on June 8. His wife, Jessica, was informed of his death at Caserma Ederle. The two were newly married and she doesn&#8217;t speak much English.

Horn said three spouses effectively moved in with her after the news. Others visited routinely to see if there was anything they could do.

Lt. Col. Mike Shinners, the rear detachment commander for the 173rd Airborne Brigade, said that kind of support has been there for all of those who left behind families in Vicenza.

A team consisting of a commander, chaplain and doctor have delivered the initial news. They&#8217;re quickly followed by friends or other spouses in the unit. Meals are furnished. Community visitation is scheduled. Travel and funeral arrangements made. Families are sometimes flown in from the States. Procedures to clear the family&#8217;s obligations and records from the base are taken care of.

Everything, Shinners said, was rehearsed beforehand.

Not that commanders ever wanted to see those plans put into action.

Shinners said the impact on the base is often greater when a soldier leaves behind a spouse or family in Italy. That&#8217;s been the case in about one-third of the deaths. But he said those providing support or conducting memorial services put forth the same effort every time, which often gives the services a similar feel.

Even though family members haven&#8217;t been present at most of the services, Shinners said a decision was made early on to follow a ceremony with a reception. Such receptions, Hudson said, give community members a chance to relieve some grief.

The fallenThe Southern European Task Force (Airborne) took command of Combined Joint Task Force-76 in Afghanistan on March 15. Since then, 16 soldiers based in Vicenza, Italy, have died in country. They are:

Curtis, the rear detachment commander for the 2nd Battalion, 503rd Infantry Regiment, said he&#8217;s had that role twice after soldiers from &#8220;The Rock&#8221; died in Afghanistan.

That support isn&#8217;t limited to the hometowns. Sgt. Maj. John Bagby, the 173rd Airborne Brigade rear detachment&#8217;s top enlisted soldier, said material from the soldier&#8217;s time in Vicenza is sent to families, along with a videotape of the memorial service held at Caserma Ederle.

In addition, soldiers who were once a part of the brigade &#8212; the Society of 173rd &#8212; have attended every memorial service held in the States.