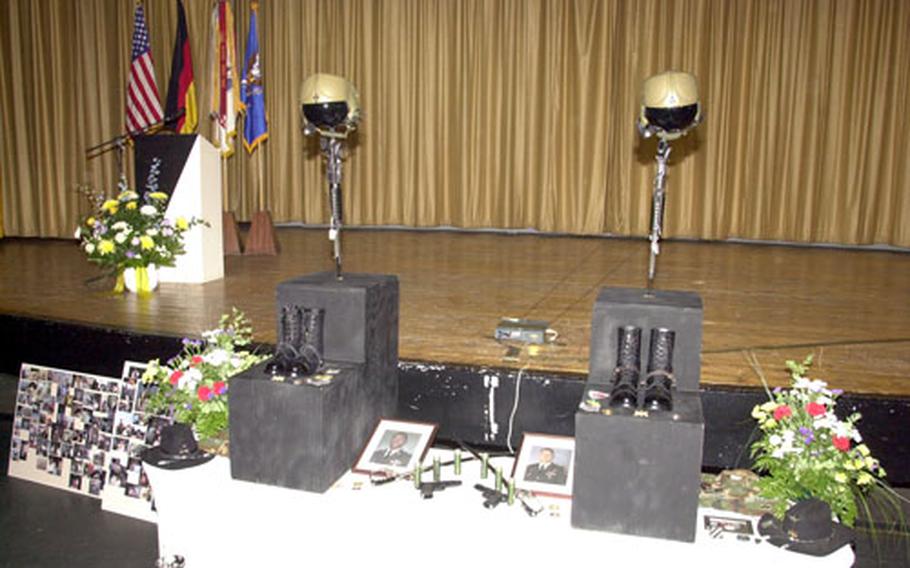 Chief Warrant Officer Timothy R. Breneman, 36, and Chief Warrant Officer Terry M. Thomas, 31, died Tuesday after the Apache went down in a heavily wooded part of Grafenw&#246;hr Training Area. The cause of the accident is under investigation, according to a 1st Armored Division statement.

Before a farewell ceremony on Friday, the dead aviators&#8217; flight helmets, dog tags, rifles, boots and cavalry spurs stood at the front of the Camp Aachen theater while Thomas&#8217; children, Ty, 7, and Tarrisa, 9, played on an assault course outside.

&#8220;I took him out on his local flight orientation. I was immediately impressed with his skill and professional demeanor,&#8221; Christensen recalled.

Thomas, a Baton Rouge, La., native who became a warrant officer in 2004 after several years as a supply soldier and noncommissioned officer, qualified to fly Apaches in March. When he joined Company C that month it was his first assignment as a pilot, according to biographical information handed out at the ceremony.

&#8220;Terry was extremely excited about flying his first gunnery, especially since he was flying with Tim. It wasn&#8217;t uncommon to see the two of them sitting in front of a computer watching old gunnery tapes and talking about techniques, tactics and procedures,&#8221; he said.

Last week, Breneman approached Mitchell and told him men in the unit had issues with his being hot under the collar,&#8221; he said.

Other soldiers spoke of Thomas&#8217; love for his children and his wife, Denisa, and his habit of working out in the gym for hours after a hard day at the range.