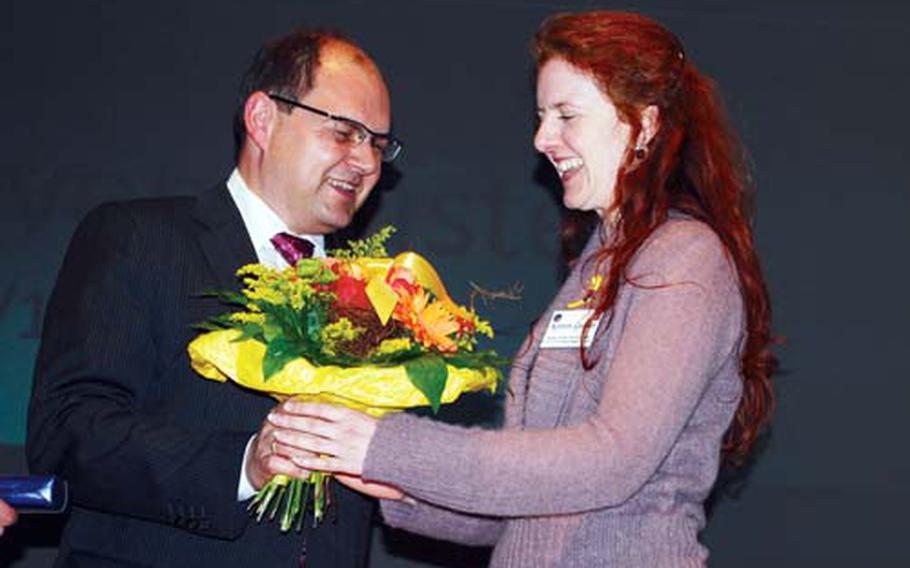 ANSBACH, Germany &#8212; The rescue was harrowing, but his son was calm in recounting it, Jack McDonough recalled Thursday.

Capt. Robert McDonough, a pilot, called him in the States from northern Afghanistan. His son described how he had to maneuver his helicopter, which was evacuating wounded German soldiers, to avoid heavy fire from insurgents who had pinned down a German platoon.

The bullets were so close, he could hear the rounds pinging off the Black Hawk&#8217;s rotors, his son said.

He wanted to let his father know he was OK before he saw the incident on the news.

"A German doctor told him that if they hadn&#8217;t gotten three of the other [German] soldiers back so quickly, they would have died," said Jack McDonough, of Williamsport, Pa.

Jack McDonough was in Ansbach Thursday to take part in a ceremony to honor his son and 13 other members of 5th Battalion, 158th Aviation Regiment, 12th Combat Aviation Brigade for their heroism in rescuing wounded German troops on April 2. Three of the 11 Germans who were rescued that day later died.

Gen. Stanley McChrystal received Gold Cross medals on behalf of the soldiers last week. This is the first time foreign troops have received the medal, which is Germany&#8217;s highest award for valor. McChrystal was to present the awards to the soldiers downrange.

On Thursday, Christian Schmidt, Germany&#8217;s assistant secretary of defense, thanked the soldiers and gave the families wine, flowers and ceramic bowls made by a Berlin manufacturer.

"We are proud that we have you," he told the group, adding that the gifts are meant to show the appreciation of the German people.

German soldiers with Parachute Battalion 373, based in the city of Seedorf in Lower Saxony, were ambushed by the Taliban while on a routine mission to deal with a roadside bomb in the Chahar Darah district southwest of Kunduz.

Up to 40 Taliban members opened fire with heavy arms, and the German soldiers called a provincial reconstruction team in Kunduz for back up, according to German officials.

During the fight, three wounded Germans were evacuated by the Americans amid firing by the Taliban.

About two hours after the fighting started, the Germans were able to break away from the Taliban but a German armored car, a Dingo, hit a roadside bomb and four soldiers were wounded. The U.S. helicopter unit evacuated these troops and four others involved in fighting later on.

After the fighting died down, another German company that took over for the first set of troops fired on two approaching cars, killing six Afghan soldiers.

German Gen. Frank Leidenberger, commander of Regional Command-North, said it can be hard to tell friend from foe in adverse conditions.

"We will do our best to support the relatives of our Afghan partners who were killed" in the incident, he said in a news release.