13th Fighter Squadron ‘Panthers’ recount their experiences from the battlefield 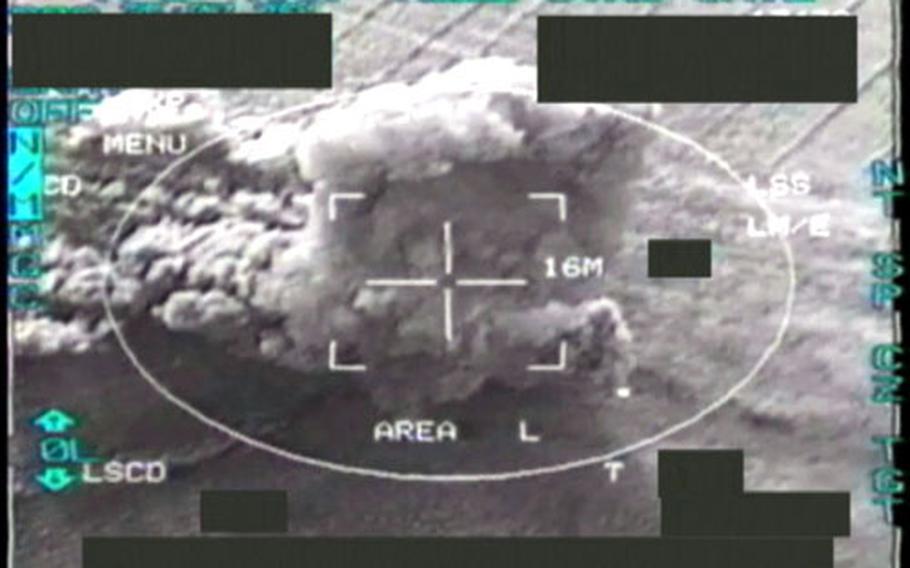 Pilots from the 13th Fighter Squadron used images like this from the F-16&#39;s cockpit Heads-Up Display to train and prepare for their deployment to Iraq. (Courtesy of U.S. Air Force)

Pilots from the 13th Fighter Squadron used images like this from the F-16&#39;s cockpit Heads-Up Display to train and prepare for their deployment to Iraq. (Courtesy of U.S. Air Force) 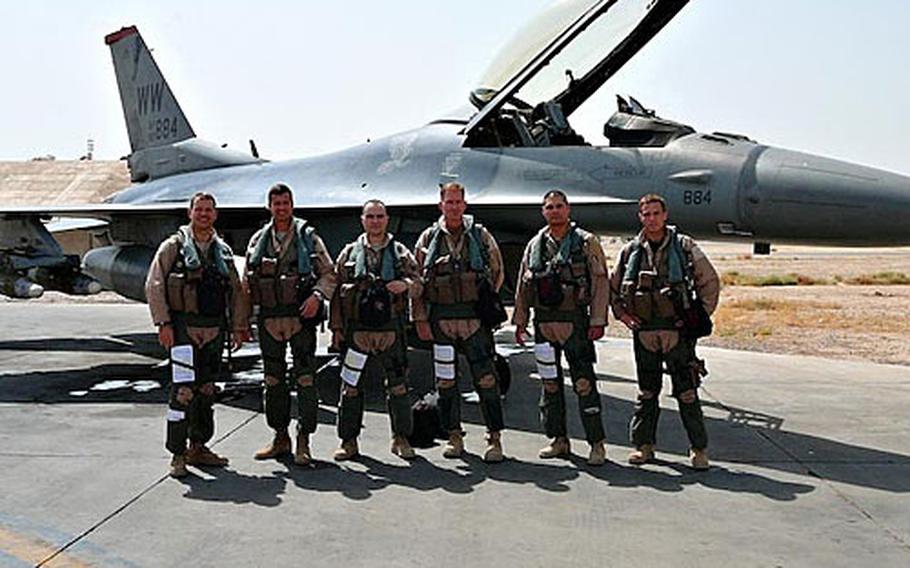 Lt. Col. Steve Williams, 13th Fighter Squadron commander, far left, stands in front of an F-16 Fighter jet this summer at Balad Air Base, Iraq, with some of his pilots, including Capt. Larry Sullivan, third from left; Capt. Chris Struve, third from right; Maj. Mike Briggs, second from right; and Capt. Kevin Hicok, far right. The pilots from Misawa Air Base, Japan, were preparing for a combat mission on Aug. 12. (Courtesy of U.S. Air Force)

MISAWA AIR BASE, Japan &#8212; The burden of war for the 13th Fighter Squadron pilots wasn&#8217;t just the 500-pound munitions they carried on combat missions.

A weighty load set squarely on their shoulders: a sense of responsibility to get it right.

In the busy skies above Iraq, there was no room for error.

Lives hung in the balance, whether it was the soldiers fighting on the ground depending on them to scare off or flatten the enemy, or innocent civilians that could be on the receiving end of a misfired munition.

Home from the war, Wolfard and pilots Capts. Kevin Hicok, Eric Freienmuth and Thomas Tauer recently reflected on the more than four months they spent this summer and fall flying from Balad Air Base north of Baghdad in support of Operation Iraqi Freedom.

Their stories offer a rare glimpse of the war in Iraq from the vantage point of the fighter pilot. Their report also offer a glimpse at how the air war in Iraq is contributing to the fight and how technology can give the U.S. military an edge in this unconventional war where there are no battle lines.

The job forced them to switch gears months before heading back to Misawa, where they traditionally train for suppression of enemy air defenses and air-to-air combat.

Every bit of the new skill sets and lessons learned from the 14th were needed. Their deployment coincided with a two-month summer &#8220;surge,&#8221; when military operations in Iraq increased by 25 percent, according to Misawa base officials.

Most 13th pilots averaged between 200 and 250 combat hours, according to Tauer. The squadron dropped 130 munitions &#8212; more ordnance than the entire previous Air Expeditionary Force rotation combined &#8212; and included three or four different fighter squadrons, according to Misawa base officials.

Freienmuth&#8217;s first mission taught him that the F-16s can provide support in many ways &#8212; and not just with big bombs.

But because the pilots could not get an exact location on where the attack was coming from, they did a show of force, flying low and loud to the ground to flush out the terrorists.

Freienmuth would later get the chance to employ.

The pilots often worked with joint terminal attack controllers, who from a forward position on the ground direct the action of fighter aircraft engaged in close air support and other air operations.

That coordination was critical to the squadron&#8217;s success, the pilots said.

&#8220;While we do have very nice sensors on the aircraft, without the high accuracy coordinates and directions that tells us exactly what we need to be looking for &#8230; it&#8217;s like standing on a top of a building looking through a soda straw trying to pick out a particular person in a city,&#8221; Tauer said.

During one mission, Tauer, 27, from Houston, was about to land his jet when he had to turn around.

&#8220;We had been monitoring this building where suspected terrorists were for almost five hours, going back and forth to the tanker,&#8221; he said.

Their support was called off, but just before landing at Balad, they were called back: &#8220;&#8216;No, negative, we need you to come back over here right now. We need you to get bombs on target,&#8217;&#8221; Tauer recalled the request. &#8220;Within minutes we had taken care of that target. That was one of the toughest mental transitions for me because I was within a minute of putting my gear down.&#8221;

The mental test of combat was like nothing they&#8217;d seen in training.

&#8220;What I remember the most is just being totally saturated, in terms of where my mind was, what I needed to focus on,&#8221; Wolfard said. &#8220;I&#8217;d never flown in an environment that had that many airplanes in it. I was just doing the best I could to hang on and keep my mind in the game, both flying the jet and situations on the ground.&#8221;

That&#8217;s when the pilots fell back on their training, of habits chiseled in repetitiveness.

That&#8217;s not to say the pilots didn&#8217;t feel the flutter of butterflies in the gut or a jolt of adrenaline.

For Freienmuth, the most nerve-wracking part of any mission was showing up at a &#8220;troops in contact&#8221; situation.

&#8220;It could range from anywhere you show up and it could be a kid yelling at you on the radio because his Humvee just got rocketed and they&#8217;re trying to gather everybody together and get going and want us to search for that threat, to you check in, some guys are whispering on the radio because he&#8217;s just hiding and trying to talk you on the enemy location,&#8221; Wolfard said.

AccomplishmentFeedback from soldiers was one of the most rewarding aspects of the deployment, the pilots said.

&#8220;Although we dropped a lot of munitions &#8230; everyone hit the right target,&#8221; Freienmuth said, adding in past wars, clear enemy lines made the need for precision less critical.