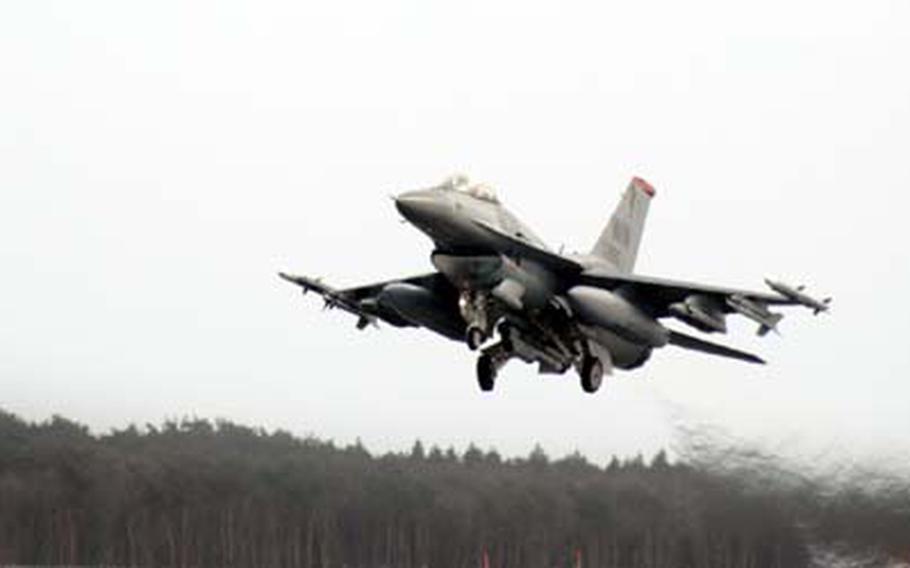 MISAWA AIR BASE, Japan -- An F-16 out of the 13th Fighter Squadron takes off for a deployment to the Republic of Korea on Monday. (Jamal D. Sutter / Courtesy of the U.S. Air Force)

The 13th Fighter Squadron, grounded by heavy snow at Misawa Air Base in Japan over the weekend, began pulling out early Monday for a six-month deployment in South Korea.

The first wave of pilots and F-16s flew out, with the main body of more than 300 support airmen expected to follow Tuesday.

The Misawa squadron, known as the Panthers, is supplying 14 jets to temporarily fill the close-air support role held by an Army Apache helicopter unit &#8212; the 1st Battalion, 2nd Aviation Regiment at Camp Eagle. The regiment will move to Fort Carson, Colo., this spring.

The fighters and airmen are deploying to Suwon Air Base, U.S. Forces Korea said in a news release. The overlap of both units will keep force levels on the peninsula at about 28,500.

"This has been a common rotation of &#8230; assets in recent years," said Master Sgt. Allison Day, a 35th Fighter Wing spokesman at Misawa. "However, based on worldwide capability requirements and the need to optimize the use of U.S. military resources, the Air Force tasked the 13th to deploy to [South Korea]."

"It will be a difficult set of challenges, but the mission set is aligned with our primary role in the Pacific," he said in a wing news release.

Even though it&#8217;s not a downrange tour and Korea is a little closer to home, several squadron members were eyeing their first deployments.

First Lt. Cory Farrer, of Brigham City, Utah, an F-16 pilot, was among them.

"It is difficult to leave my wife and children," he said in the release. "Despite the difficulties of separation, I am looking forward to experiencing my first deployment."

"Regardless of the location, a deployment implies separation from our families and this deployment will be for an extended period of time," Aanrud said. "It&#8217;s always a challenge when we are separated from friends and loved ones, but it&#8217;s also a part of the Air Force that makes it unique and rewarding."

Stars and Stripes reporter Teri Weaver contributed to this story.