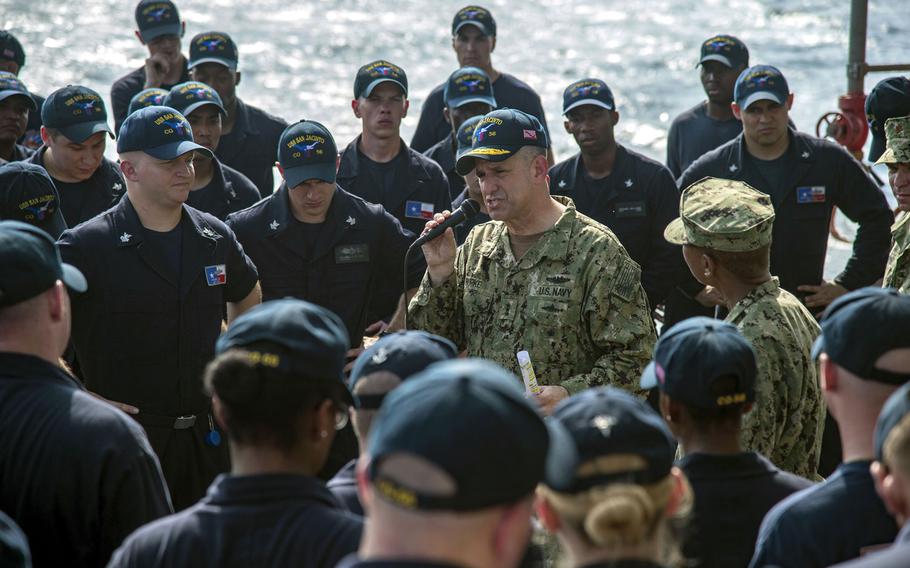 Chief of Naval Personnel Vice Adm. Robert Burke speaks with Sailors during an all hands call on the flight deck of the cruiser USS San Jacinto in the Persian Gulf on Oct. 30, 2016. Burke announced Wednesday that the personal data of more than 130,000 sailors has been compromised by a contractor's laptop computer. (Robert J. Baldock/U.S. Navy photo)

The names and social security numbers of 134,386 sailors were accessed by “unknown individuals” from a contractor’s laptop computer, the Navy announced Wednesday.

The Navy said it was notified by Hewlett Packard Enterprise Services on Oct.27 that one of its employees supporting a Navy contract had a laptop compromised, according to a service statement.

There is no evidence for now that the personal data has been misused, according to the preliminary results of an ongoing Naval Criminal Investigative Service investigation.

“The Navy takes this incident extremely seriously — this is a matter of trust for our sailors,” Chief of Naval Personnel Vice Adm. Robert Burke said, according to a Navy statement. “We are in the early stages of investigating and are working quickly to identify and take care of those affected by this breach.”

The Navy will contact affected sailors by phone, mail and email, according to the statement.

A Navy official said the data came from the Career Waypoints database, known as C-WAY, which sailors use to submit re-enlistment and Navy Occupational Specialty requests, according to Navy Times.

The Navy is considering credit monitoring options for affected sailors, according to the statement.

The federal government provided free credit monitoring services after hackers beginning in 2014 penetrated the Office of Personnel Management, stealing the data of more than 20 million civilians and servicemembers. OPM learned of the hack more than a year later after a private contractor uncovered the theft.