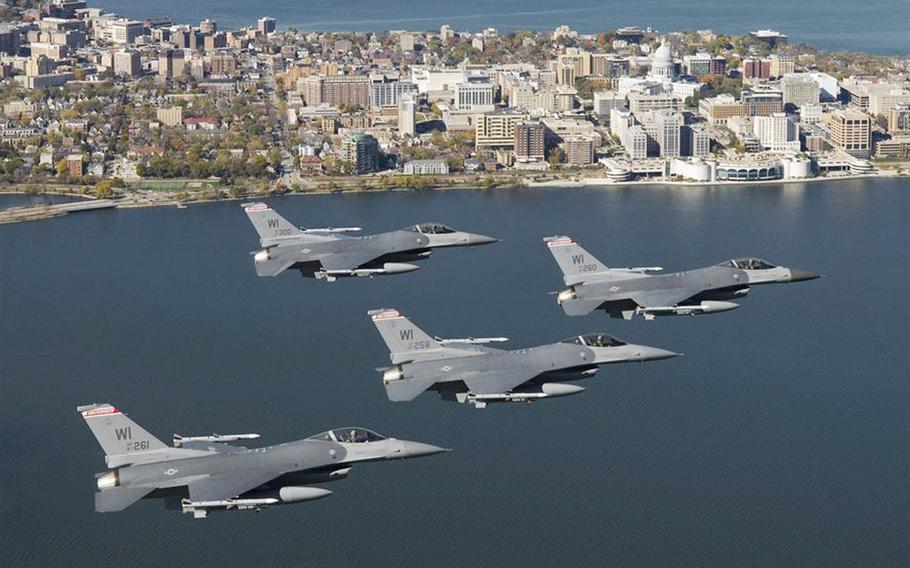 A dozen F-16 Fighting Falcons and 200 Wisconsin Air National Guardsmen will arrive in South Korea this month as tensions continue to rise over the North’s nuclear and missile programs.

The jets from the 176th Fighter Squadron will fly out of Kunsan Air Base during a four-month rotation, a Pacific Air Forces statement said. They will train under the direction of the 8th Fighter Wing.

Such deployments “signify a continued commitment to regional stability and security, while allowing units to train in the Pacific theater,” the statement said. “F-16s routinely deploy throughout the U.S. Pacific Command area of responsibility.”

Tensions have spiked on the peninsula after Pyongyang test-fired its second intercontinental ballistic missile last week. North Korean leader Kim Jong Un claimed the launch proves the communist state possesses the ability to reach the U.S. mainland with its weapons.

Pyongyang has also been testing systems to launch missiles from submarines, and South Korean military and intelligence officials suspect the North is preparing for another missile or nuclear test, according to South Korea’s Yonhap News Agency.

Meanwhile, the U.S. and South Korea are planning to deploy four additional Terminal High Altitude Area Defense, or THAAD, launchers on the peninsula within the next month, South Korea’s Yeongnam Ilbo newspaper reporter.

Two launchers are already operational in the remote southeastern area of Seongju, while the remaining four have been kept in storage.

Annual U.S.-South Korean Ulchi-Freedom Guardian war games are scheduled to begin Aug. 21. North Korea objects to the presence of U.S. ships and joint military exercises, which it alleges are a rehearsal for an invasion despite Washington’s insistence that the drills are defensive in nature.