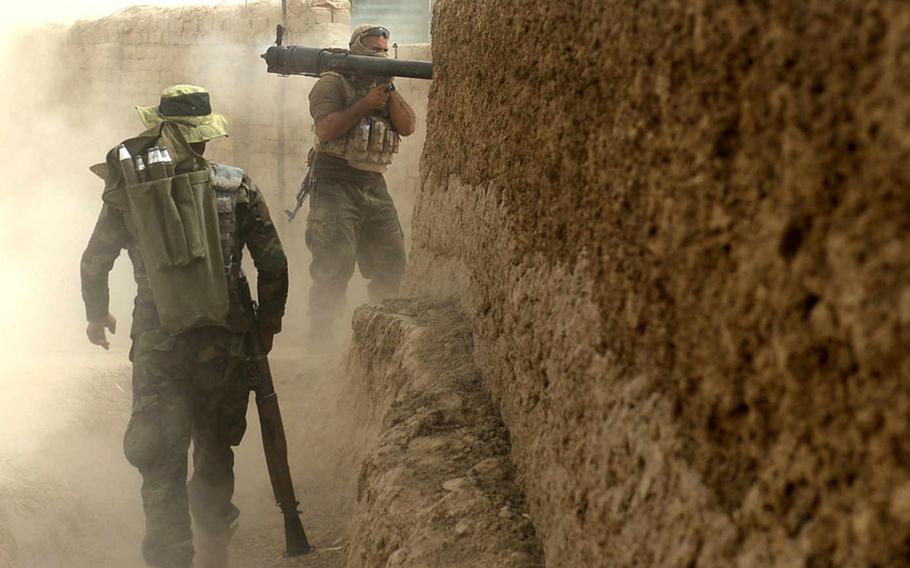 Afghan troops fire rockets at Taliban positions during the battle to clear militants from Kunduz city in October 2015. At least 12 Afghan soldiers were killed after being drugged at a checkpoint near the capital of northern Kunduz province overnight, an official said Tuesday, in what appeared to be an insider attack. (Stars and Stripes)

KABUL, Afghanistan — At least 12 Afghan soldiers were killed after being drugged at a checkpoint near the capital of northern Kunduz province overnight, an official said Tuesday, in what appeared to be an insider attack.

Fourteen soldiers were assigned to the outpost, one of a series of checkpoints that forms a defensive ring around Kunduz city. Two of the soldiers “poisoned” their colleagues with a narcotic, said Sher Aziz Kamawal, a senior police commander in Kunduz, then killed them and fled, taking weapons and ammunition.

Brig. Gen. Dawlat Waziri, Defense Ministry spokesman, confirmed that 12 soldiers had been killed Monday night and said the incident was under investigation.

“We still don’t know what exactly happened, whether it was an enemy’s plot or what,” Waziri said.

Taliban spokesman Zabihullah Mujahid claimed responsibility for the attack online and said insurgents overran the checkpoint and killed 13 Afghan soldiers. He posted photos on Twitter of weapons apparently seized from the checkpoint, including two machine guns and several M16 rifles.

The Taliban have repeatedly threatened Kunduz city since the start of their summer campaign, after they briefly captured the city last fall. Insurgents have managed to overrun a number of checkpoints throughout Afghanistan this year, seizing weapons, ammunition, vehicles and equipment from government forces.

There have been several insider attacks this year targeting Afghan and international forces, though their number has dropped sharply in the past two years.

U.S. officials have said they expect the Taliban to continue to threaten major population centers, especially the provincial capitals in the volatile northern Kunduz and southern Helmand provinces. But they said they are confident the Afghans can repel them.

NATO officials say checkpoints, often set up at the request of locals who want to feel more secure, remain vulnerable to Taliban attacks because they are sparsely manned and because of the government's failure to properly equip, arm and inform troops.