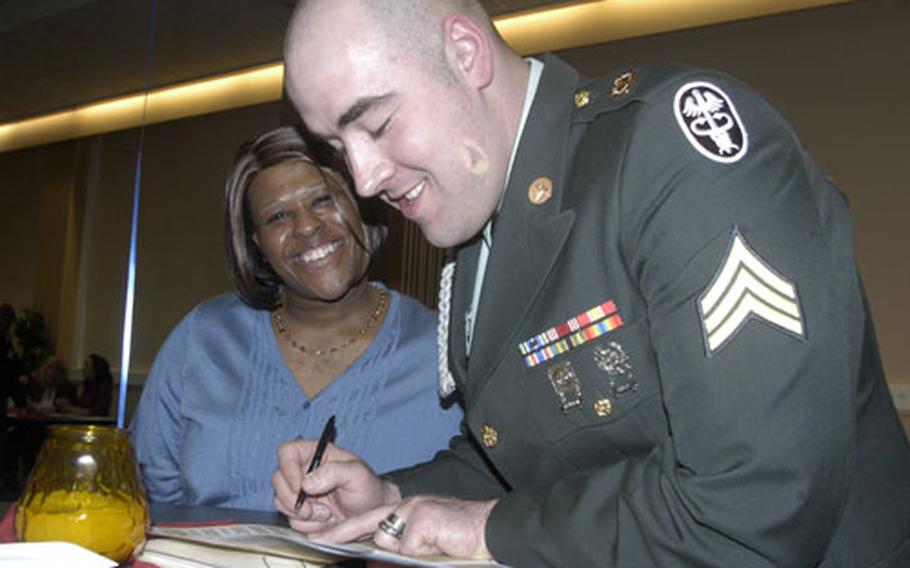 Sgt. Ilker Irmak fills out an application for a U.S. passport on Wednesday as his wife, Deborah, looks on. Irmak, formerly of Turkey, became a U.S. citizen during a ceremony in Stuttgart, Germany. (Charlie Coon / S&S)

Sgt. Ilker Irmak fills out an application for a U.S. passport on Wednesday as his wife, Deborah, looks on. Irmak, formerly of Turkey, became a U.S. citizen during a ceremony in Stuttgart, Germany. (Charlie Coon / S&S) 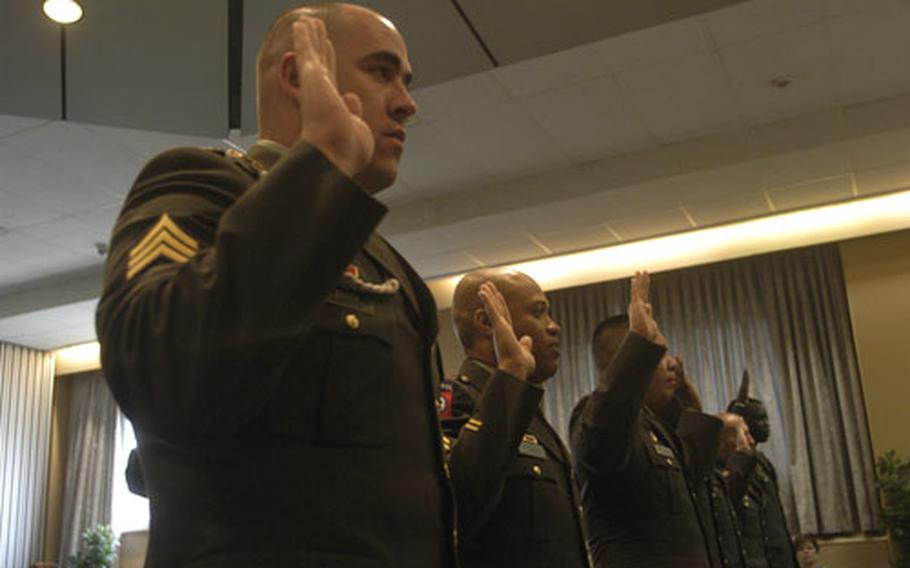 Irmak, front, and others take an oath on Wednesday as they became U.S. citizens during a ceremony in Stuttgart, Germany. (Charlie Coon / S&S)

Ilker Irmak of Turkey met his future wife, a U.S. soldier, on Sept. 11, 2001. The Pond security guard was posted at a U.S. base in Kaiserslautern after the terrorist attacks, and so was she.

On Wednesday, Alvarez and Irmak and 10 others raised their right hands and became U.S. citizens during a ceremony in Stuttgart. The troops have been serving the country in the military. Now they can serve it as full-fledged Americans.

At least two of the new citizens spent much of 2006 and 2007 pulling tough duty in Iraq.

Alvarez plans to make use of his citizenship when he returns home to Miami.

The 24-year-old told of how his boat was intercepted off the Cuban coast, and how he and his father eventually went to Peru and then years later to the U.S. where his grandmother had become a citizen.

Spc. Mark Pagkalinawan spent 15 months in Ramadi, operating a recovery vehicle that would retrieve blown-up and otherwise disabled vehicles. He began his application for citizenship while in Iraq.

The event was organized by the U.S. Consulate in Frankfurt, which in 2007 naturalized 148 servicemembers. They had performed ceremonies in the past in Heidelberg and Kaiserslautern. On Feb. 6, the consulate swore in 13 new citizens during a ceremony in Vilseck.

The new U.S. citizens have rights now in addition to the right to fight for the country. They can vote, bring family members to the U.S. and travel with a U.S. passport. They also can apply for federal jobs and run for many elected offices. For those who aspire to certain jobs, their new citizenry enables them to qualify for security clearances.

At the Stuttgart ceremony, those who became citizens came from Sudan, Gambia, Haiti, Guyana and the Dominican Republic, among other places.

Spc. Son Kuykendall of the Republic of South Korea and 21st Theater Sustainment Command admitted to getting a little teary. She was accompanied by her husband, John, and their 4-year-old, Vance.

John was kept busy as his wife became a citizen.