Pvt. Michael McGhee, foreground, cuts a sheet of plywood by the light of a flashlight held by Pfc. Calvin Miller. The soldiers, both with 2nd Platoon, 76th Engineer Company, were working the night shift at Camp Blessing, Afghanistan, building the roof of a new barracks at the camp. Soldiers and local workers are working around the clock to expand the base for the projected arrival of a battalion from the 173rd Airborne Brigade. (Michael Abrams / S&S)

Pvt. Michael McGhee, foreground, cuts a sheet of plywood by the light of a flashlight held by Pfc. Calvin Miller. The soldiers, both with 2nd Platoon, 76th Engineer Company, were working the night shift at Camp Blessing, Afghanistan, building the roof of a new barracks at the camp. Soldiers and local workers are working around the clock to expand the base for the projected arrival of a battalion from the 173rd Airborne Brigade. (Michael Abrams / S&S) 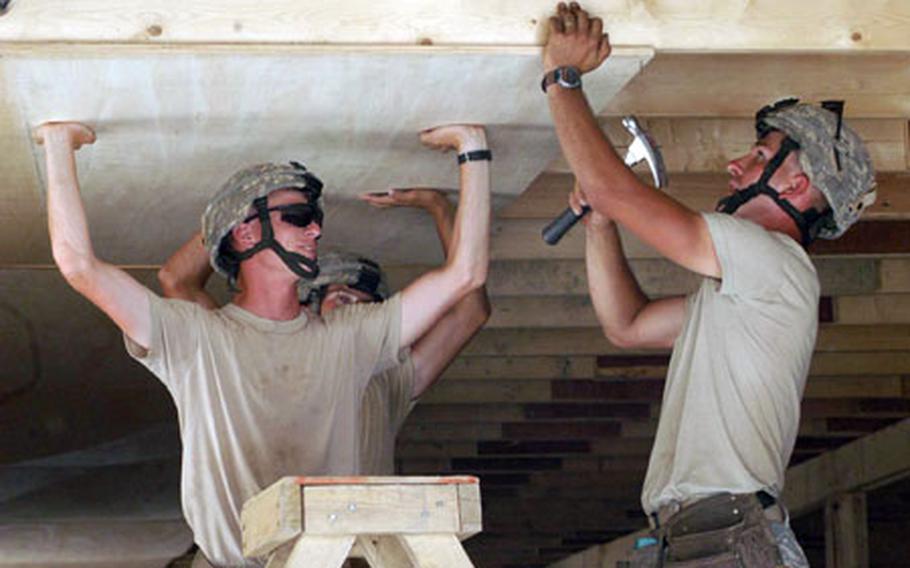 NANGALAM, Afghanistan &#8212; There are not enough hours in the day, but work continues unabated in northeastern Afghanistan to expand Camp Blessing before the 173rd Airborne Brigade moves in to take over.

Some 10th Mountain Division soldiers returning to this base in Konar province after weeks in the field are astonished, and a few even put off, by the around-the-clock dust and din. Until several weeks ago, Camp Blessing was a small, secluded outpost situated on a hillside above the rushing waters of the Pech River.

For more than a year the blue and white unit flag of Company B, 1st Battalion, 32nd Infantry Regiment has flapped in the mountain breeze. But next month it&#8217;ll be replaced by a battalion pennant, signaling a larger force that will reach even deeper into remote areas favored by anti-coalition forces.

&#8220;Our soldiers have been working around the clock,&#8221; said Army Warrant Officer Mohammed Badal, a site manager for the 76th Engineer Company.

Last month, five squads from two construction platoons arrived from Jalalabad to help with the expansion. They have been joined by a work force of nearly 200 locals, drawn to Camp Blessing by the promise of money, not easy to come by in these parts. A laborer, for example, can make up to $5 a day, while a bricklayer can earn more than double that.

The main focus now is finishing four brick barracks, a dining hall and a stone perimeter fence before the 173rd arrives, Garrison said. Future plans for the camp include another barracks building and a new motor pool.

The latter project is destined for the backside of the camp, at the base of a mountain nicknamed &#8220;Avalanche.&#8221; Ironically, while there is no shortage of stone, given the terrain, the constant demand for rocks, gravel and concrete is taxing the locals&#8217; capacity to produce it. Such is the feverish pace.

Staff Sgt. Edwin Alicea, a platoon sergeant with the 76th, had to lobby hard to get enough gravel for the dining hall project he is overseeing. That was about two weeks ago. Now the building is nearly finished, save for the electrical and interior work.

Work on two of the four barracks began six weeks ago and already one is just about ready. Construction of the other two quarters started three weeks ago. Locals work day and night in two 12-hour shifts. The night crew typically picks up where the day shift leaves off, laboring under lights trained on the task at hand.

Army engineers are working in the dark hours, too.

A few nights ago, several soldiers stood atop the first barracks building, sawing and hammering as they hustled to finish the roof. Not all of them are carpenters by trade. Some are electricians, others plumbers.

Earlier in the day, Garrison walked about the site, pointing to other improvements large and small. For a guy with a degree in engineering management, it was clear he was back in his element &#8212; and loving it.

For Garrison, the project is also a chance to send a message or two.

At the tactical operations center, rows of ugly barriers have been replaced by an attractive yet functional stone wall, and the windows have glass panes.

Additionally, a lot of this work could have been left to the 173rd Airborne Brigade. But the 10th Mountain Division staff didn&#8217;t want that. To be sure, there is more work ahead as Camp Blessing transitions from a company to a battalion headquarters &#8212; but far less work than there could have been.