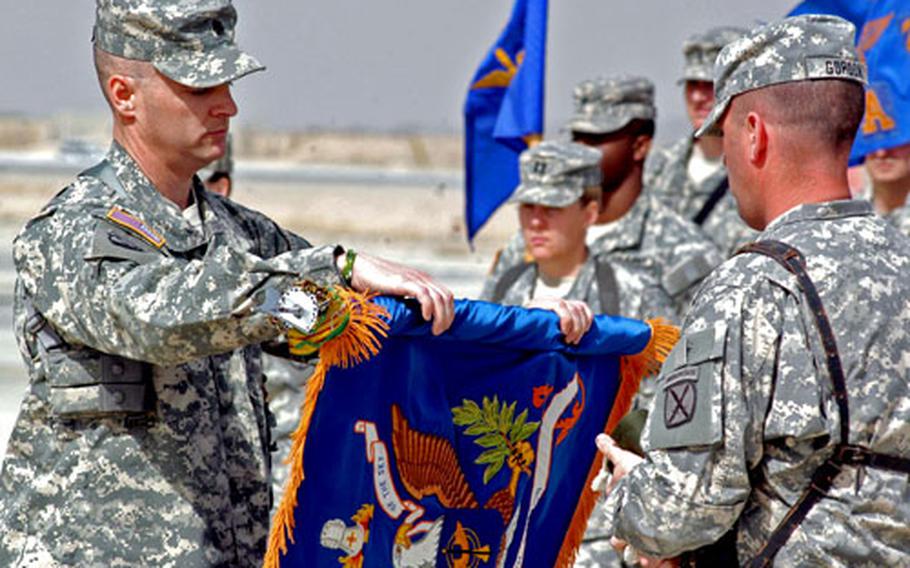 KANDAHAR AIRFIELD, Afghanistan &#8212; The 10th Mountain Division has just about completed a series of transfers of authority at the largest coalition base in southern Afghanistan.

Patterson will lead a force of about 800 soldiers that will fly and maintain AH-64 Apaches, CH-47 Chinooks and UH-60 Black Hawks over the next year.

Lt. Col. Robert Werthman, the departing commander, and the rest of his task force are in the process of returning to bases at Illesheim and Giebelstadt, Germany, and the western United States. Task Force Storm had a busy tour, with crews flying almost 22,000 combat hours. It transported more than 10 million pounds of cargo and 47,000 passengers and was involved in dozens of direct engagements with enemy forces. Five crewmembers lost their lives and four aircraft were destroyed. Twenty-five other helicopters suffered damage.

In the transfer of authority ceremony, Werthman praised the accomplishment of his soldiers, but said, &#8220;It was not without a price in blood, sweat and machinery.&#8221;

Patterson said his troops are well aware of what they are getting into. In addition to battles with enemy forces on the ground, crews will face a harsh environment and severe weather conditions.