108 more POWs are flown to freedom Navy Capt. Leo Profilet, the senior officer on the day's first flight of returning POWs, is all smiles as he addresses the crowd at Clark Air Base in the Philippines. (Don Gunn/Stars and Stripes)

Navy Capt. Leo Profilet, the senior officer on the day's first flight of returning POWs, is all smiles as he addresses the crowd at Clark Air Base in the Philippines. (Don Gunn/Stars and Stripes) 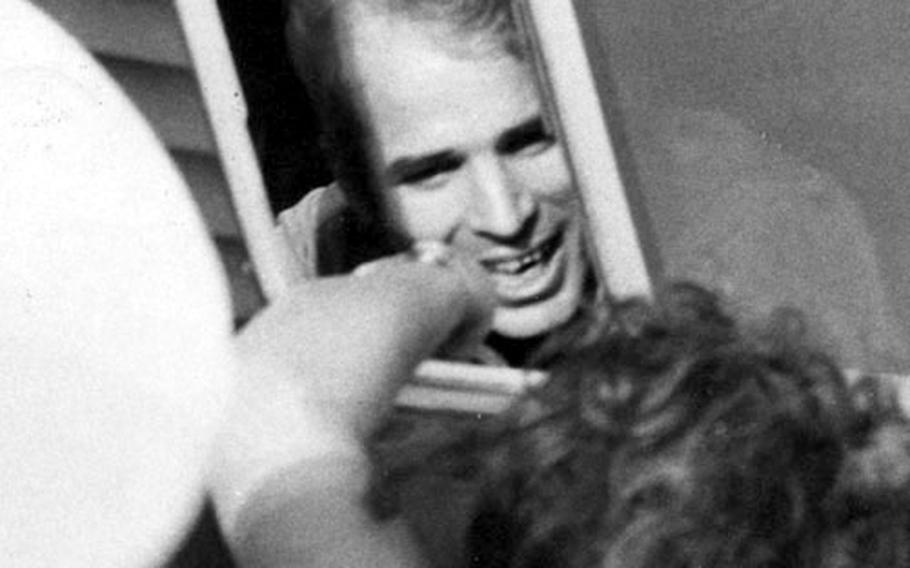 Lt. Cmdr. John S. McCain III talks with a well-wisher after boarding a bus at Clark Air Base. (Don Gunn/Stars and Stripes)

CLARK AB, R.P. — One hundred and eight former American prisoners of war landed here Wednesday, and the first man to debark told a cheering crowd, "Thank God, the United States of America, and all you wonderful, good-looking people."

The first of three C141 Starlifters that brought the returnees from Gia Lam Airport outside Hanoi touched down at 5:12 p.m.

For some of the distinguished passengers, the journey to freedom marked the end of almost six years of imprisonment.

When the doors to the first plane swung open, Navy Capt. Leo T. Profilet, as senior member of that flight, saluted and made his way down to a red carpet, where he was greeted by Adm. Noel Gayler, commander-in-chief Pacific; Henry A. Byroade, U.S. ambassador to the Philippines; Lt. Gen. William G. Moore Jr., 13th Air Force commander and several hundred spectators who showered returnees with shouts and applause.

A prisoner since Aug. 21, 1967, Profilet spoke in a broken but cheerful voice as he delivered a touching message of gratitude. Followed by 39 other passengers on the first flight, he walked to a blue Air Force ambulance bus that took the returnees to the base hospital for processing and medical checks.

The returnees, except for one man, wore dark blue pants and light blue shirts given to them by their former captors. Col. David W. Winn, senior man off the third plane, debarked in a flight suit he had borrowed from a crew member.

Thirty-two more men captured by the Viet Cong are scheduled for release in Hanoi Friday.

Many of the returnees who came off the first plane Wednesday were in joyous tears. A small group in the crowd repeatedly shouted the name of Maj. Jay C. Hess, who had been held captive since Aug. 24, 1967, and he threw his arms in the air and shouted, "Hi!"

An Air Force nurse hugged each returnee as he debarked and an escort officer who rode with them said some broke out in a joyous chorus of "God Bless America" as the plane left North Vietnam. One of the former prisoners led the group in a "very moving prayer," the officer said.

The 51-year-old Flynn, who got off first and spoke for the others, thanked his President, his country and the American people for "the efforts and lives that were expended in our behalf.

"I would like to particularly acknowledge the courage and integrity of our President. We knew that he must have been faced with many difficult decisions and circumstances, such as the bombing of Hanoi.

"It sustained us, it had a tremendous impact on our morale. We never lost faith in our country.

"And finally, I would like to say that I have been in better places, but I have never been with better people. Our men performed magnificently. They were first-class soldiers, they were first-class citizens and they asked me to thank you for your support and say God bless, to all of you."

Flynn, a 51-year-old father of three, had been held since Oct. 27, 1967, and had been recognized by other prisoners as their leader.

(The Associated Press reported that McCain limped on his right leg as he walked to the hospital bus. "I'll have to have some operations on my leg," the report quoted him as saying as he leaned out the window of the bus. McCain, the second man off the second plane, grinned happily, according to the report, and said in a quiet voice, "I'm fine.")

Mrs. Caroline Gayler, whose husband succeeded the elder McCain as head of the world's largest military command, walked to the bus window to greet the 37-year-old Naval Academy graduate and pass on to him a few messages from his parents. When later asked what McCain had said to her, Mrs. Gayler said she was so excited she forgot. McCain has a wife and three children in Florida.

The last aircraft landed at 6:11 p.m. and returnees aboard included Bobby Joe Keesee, a mysterious civilian who vanished from his home in Albuquerque, N.M., in May, 1970, and turned up on the prisoner list that preceded this release. Keesee, described by a State Department representative who flew back with him as a medium-built man who looked as though he had been in quite a bit of sun, did not walk the red carpet — he debarked down a rear ramp that is generally used for stretcher cases.

Winn repeated the thanks of the others and added:

"You brought us home with honor and we hope to serve you well. To borrow from Keats, freedom is happiness and happiness is freedom."

As buses carrying the returnees left, many of them leaned out windows to give the crowd the thumbs-up sign.

Some were handed up signs and flowers. Navy Cmdr. Hugh A. Stafford was handed a single yellow rose and said he planned to take it to his wife, who traveled around the Far East a few years ago urging servicemen and civilians to write letters on behalf of the POWs to Hanoi.

Escort officers on each of the flights said the men asked anxious questions about phone calls home and when they would reach the States and see their families. They also read magazines, newspapers and a special Pacific Stars and Stripes news supplement that covered the years 1965-72.

One escort officer said, "It's another beautiful day." For 108 men, it was the day of their life.