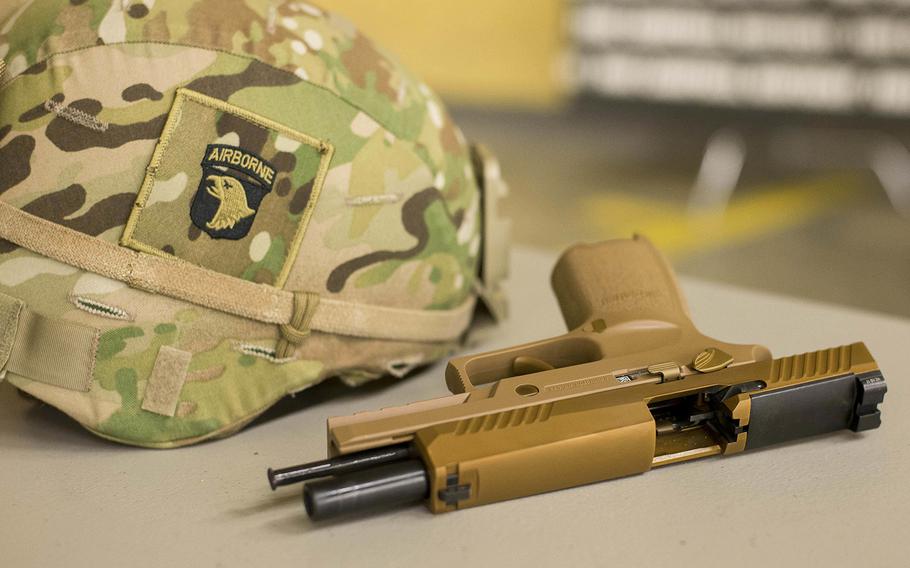 The M17, or Modular Handgun System, is the Army's newest handgun currently being fielded to soldiers. (Samantha Stoffregen/U.S. Army)

WASHINGTON — Soldiers with the 101st Airborne Division this week became the first to receive the Army’s new handgun, which will be distributed to team leaders in a first for the service, according to Army officials.

Twenty-five soldiers with the Fort Campbell, Kentucky-based division’s 1st Brigade Combat Team received and fired the M17 Modular Handgun System on Monday, said Lt. Col. Martin O’Donnell. The division received about 2,000 M17 and M18, a compact version of the new pistol, kicking off the replacement of the decades-old M9, set to be phased out during the next 10 years, he said.

The new sidearms, produced by Sig Sauer, offer better accuracy, tighter dispersion and better ergonomics than the service’s M9, said Lt. Col. Steven Power, a product manager with the Army’s Project Manager Soldier Weapons office. The new pistol is “far more lethal” than the Beretta-made M9, which was first fielded by the Army in 1986 and has long drawn the ire of soldiers, he said.

In an Army statement, soldiers who tested the M17 said they were impressed.

“It is easier to fire and simpler to operate,” said Sgt. Matthew J. Marsh with the 1st Brigade Combat Team. “The pistol felt very natural in my hand.”

For the first time, the Army will provide the sidearm to team leaders, typically corporals, to give soldiers in charge of the Army’s smallest tactical units more options on the battlefield, the Army said. Team leaders in the 101st will be the first to receive the pistols, but the policy will eventually expand across the service.

The handguns are expected to be distributed to several other units before the end of the year, including the Army’s newly formed 1st Security Forces Assistance Brigade at Fort Benning in Georgia, an official said. M17s and M18s will be distributed to the Marine Corps, Navy and Air Force eventually.

Sig Sauer won the Army’s $580-million contract to manufacture the service’s new pistol in January. The contract includes the handgun, accessories and ammunition and is slated to run for the next decade.

The sidearm is a variant of Sig Sauer’s commercially available P320 pistol, according to the New Hampshire-based company. It is equipped with an external safety and includes an integrated rail system to attach light and laser systems and night-vision sights. The M17 and M18 also can be outfitted with sound suppressors, according to Sig Sauer.