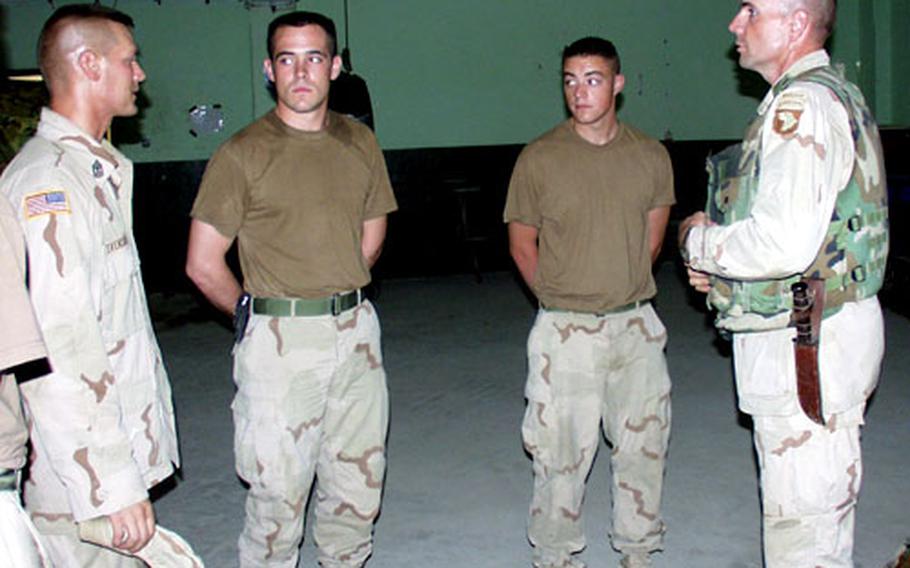 BAGHDAD, Iraq &#8212; Mosul is a town that did not get much attention until Saddam Hussein&#8217;s sons, Odai and Qusai, were killed there last week, a triumph that was promptly followed by two deadly attacks on U.S. personnel.

But for the 101st Airborne Division (Air Assault) soldiers who guard the Al Kindi missile research facility, Mosul has always been a tense and dangerous mission.

Al Kindi was a part of the State Organization for Technical Industries, a part of the Iraqi Ministry of Defense. The facility used to be the biggest missile development site in Iraq, according to U.S. intelligence reports.

The site is so significant that it was one of the first searched by U.S. troops for nuclear weapons. Although no weapons of mass destruction have been reported, the facility is crammed full of what one 101st senior NCO officer called &#8220;dangerous junk,&#8221; such as missile parts, explosives and other items that draw a mix of criminals, terrorists and people just looking to turn a buck.

Today, all that can be seen of Al Kindi is a high wall marked by guard towers manned by Iraqi police forces. Outside the compound, dozens of thoroughly looted trailers lie askew, listing and rusting in the heat.

Company Bravo, the 120 U.S. troops from the 101st&#8217;s 1st Brigade who act as the security force for Al Kindi, live in a well-secured warehouse compound that lies steps away from the main facility.

The U.S. soldiers are busy because the wealth of goodies inside the Al Kindi gates makes it an attractive target for criminal groups, said Col. Ben Hodges, commander of the &#8220;Bastogne Bulldogs,&#8221; the 101st&#8217;s 327th Infantry Regiment, 1st Brigade.

Such intruders might want to invade Al Kindi for potentially deadly and sophisticated electronics and munitions, Hodges said during a Monday visit to Bravo Company, which is temporarily attached to the 101st&#8217;s 2nd Brigade in Mosul.

Army explosive ordnance experts will deal with Al Kindi at some point, but the compound &#8220;is probably one of 20 massive caches&#8221; in the 101st&#8217;s area of responsibility, Hodges said.

Meanwhile, U.S. civil affairs personnel are trying to warn the local population that looting Al Kindi is not only illegal, but could result in tragedy if someone unwittingly picks up an explosive or other dangerous device.

Until the ordnance experts can come in and &#8220;sanitize&#8221; Al Kindi, Company Bravo soldiers will continue to defend the site.

In response, the company conducted a mission that resulted in the apprehension of 55 people and the capture of several dangerous weapons, which a senior NCO asked not to have detailed, for security reasons.