$1 million raised at D.C. gala for families of fallen troops Buy Photo
Family members who lost loved ones serving in the military get ready for a group picture Tuesday at the Tragedy Assistance Program for Survivors&#39; annual fundraising gala Tuesday. (Jeff Schogol / Stars and Stripes)

Buy Photo
Family members who lost loved ones serving in the military get ready for a group picture Tuesday at the Tragedy Assistance Program for Survivors&#39; annual fundraising gala Tuesday. (Jeff Schogol / Stars and Stripes) Buy Photo
Kim Ruocco, whose husband committed suicide while serving in the Marine Corps, said the Tragedy Assistance Program for Survivors allowed her family to talk about his death without shame or embarassment. (Jeff Schogol / Stars and Stripes) 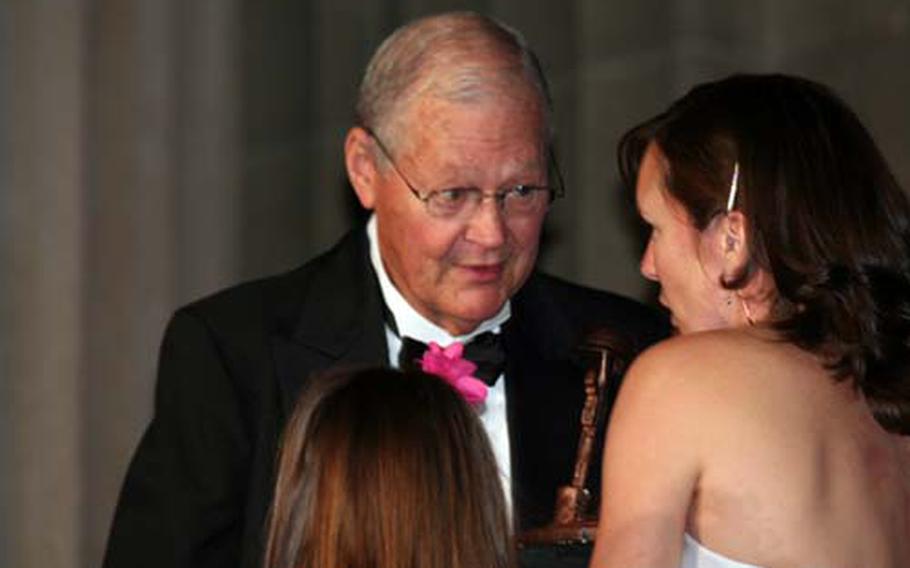 The Tragedy Assistance Program for Survivors has helped the families of more than 25,000 servicemembers who have died in the line of duty, in accidents or by suicide since 1994. The group provides a peer mentoring program, seminars for adults and a &#8220;good grief camp&#8221; for children on how to deal with grief, as well as casualty case management assistance for families on a variety of issues.

&#8220;We&#8217;ve trained over 2,000 peer and military volunteers to meet the mission of caring for all who are grieving the death of an American hero,&#8221; said group founder and chair Bonnie Carroll.

Kim Ruocco, whose husband Marine Corps Maj. John Ruocco committed suicide in 2005, said TAPS allowed her family to deal with their grief without shame or embarrassment.

Before the group&#8217;s inception, military families who lost loved ones had to rely on neighbors to help them get through rough times, said U.S. Rep. Ike Skelton, chairman of the House Armed Services Committee.

Skelton, D-Mo., was choked with emotion as he accepted an award from TAPS for supporting military families, presented by the family of Army Capt. Mike Stubenhofer, who was killed in Iraq in December 2004.

&#8220;Bonnie, we owe you and your associates and your friends and your supporters a great debt of gratitude, for there are others under your tutelage, Bonnie, who now put their arms about those that need love, need condolences in their moment of grief,&#8221; he said.

Skelton has been very involved with talking to survivors and supportive of military families, Neiberger-Miller said.

Keynote speaker Gen. David Petraeus, head of U.S. Central Command, offered his thanks to the families of troops who have died.

&#8220;Whatever the geography or circumstances of your loved ones&#8217; deaths, they gave a precious gift to all of us in their willingness to live a life of service, and they simply would not have been able to accomplish all they did for our nation without your love and your support,&#8221; Petraeus said.

He also saluted these families for carrying on after their loss.

&#8220;You have soldiered on as they would have wanted you to soldier on: In quiet dignity through circumstances that many of us would have felt we could not bear,&#8221; Petraeus said. &#8220;Your resolve and your strength of purpose in picking up the pieces of your lives have been extraordinary.&#8221;

Many such families have joined TAPS to help others dealing with the loss of a servicemember, he said.

&#8220;You understand the depth of their sorrow in a way that others cannot and you provide the kind of support that no one else can,&#8221; Petraeus said.

More than 5,400 U.S. troops have been killed in the wars in Iraq and Afghanistan, Adm. Mike Mullen, chairman of the Joint Chiefs of Staff, said at Tuesday&#8217;s gala.