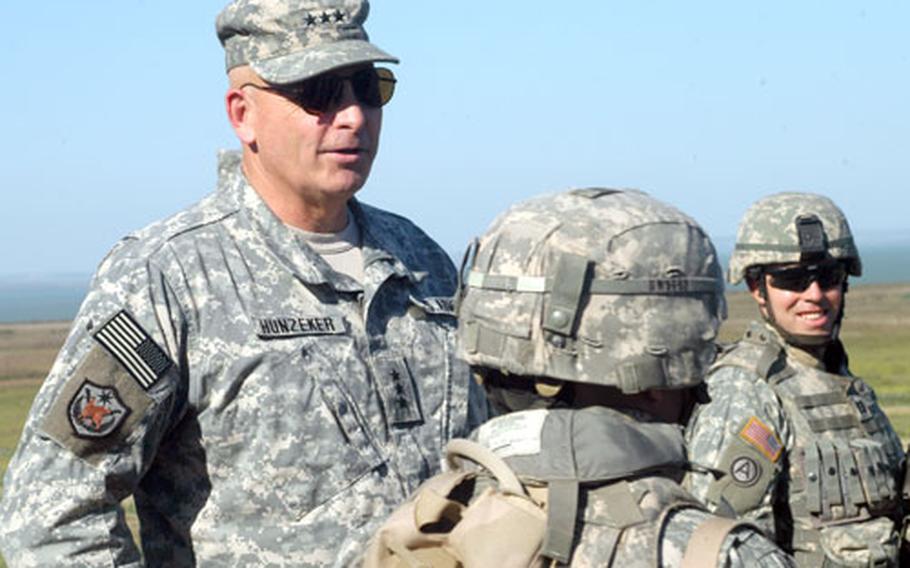 MIHAIL KOGALNICEANU AIR BASE, Romania &#8212; The soldiers originally set to be first to train at a Romanian base and begin a new, continual U.S. presence there turned out to be needed elsewhere. The 2nd Cavalry (Stryker) Regiment was called instead to Iraq.

So in late April, the 1st Battalion, 94th Field Artillery Regiment, got the news. They were to play a role in transformation by deploying for three months to Mihail Kogalniceanu Air Base in Romania.

By August, some 330 U.S. Army rocketeers were training with Romanian soldiers on the once ramshackle base where scores of millions of dollars are being spent and scores of stray dogs still roam.

Just settling in there, they learned on Sept. 19 that they also were to play another role in transformation: Soon after they returned to Idar-Oberstein, Germany, the unit was moving again, this time permanently, to Fort Lewis, Wash.

But none complained during a visit last weekend from V Corps commander Lt. Gen. Kenneth Hunzeker.

Soldiers answered him happily, if, in some cases, a little nervously. None complained about anything, although a few told him they were leaving the Army, including a captain, one of the few women on the base, who said she wanted to start a family.

The exercise with the 1-94th, called &#8220;Deep Steel,&#8221; which cost about $8.5 million and ends later this month, has been judged a success by a variety of measures, despite the fact the soldiers are doing the sort of infantry drills that artillerymen don&#8217;t usually do.

And they were popular with the locals, especially evident on two-hour convoys to the firing ranges at the even more remote base, Babadag.

Among the soldiers&#8217; duties last weekend was to demonstrate &#8212; for Hunzeker and later, a group of Romanian noncommissioned officers &#8212; their skills and equipment, such as their engagement skills trainer that allows practice shooting but saves real bullets.

Before long, Hunzeker&#8217;s 6-foot-4-inch frame was stretched out on the floor, his eye to an M-16 sight, his finger on the trigger.