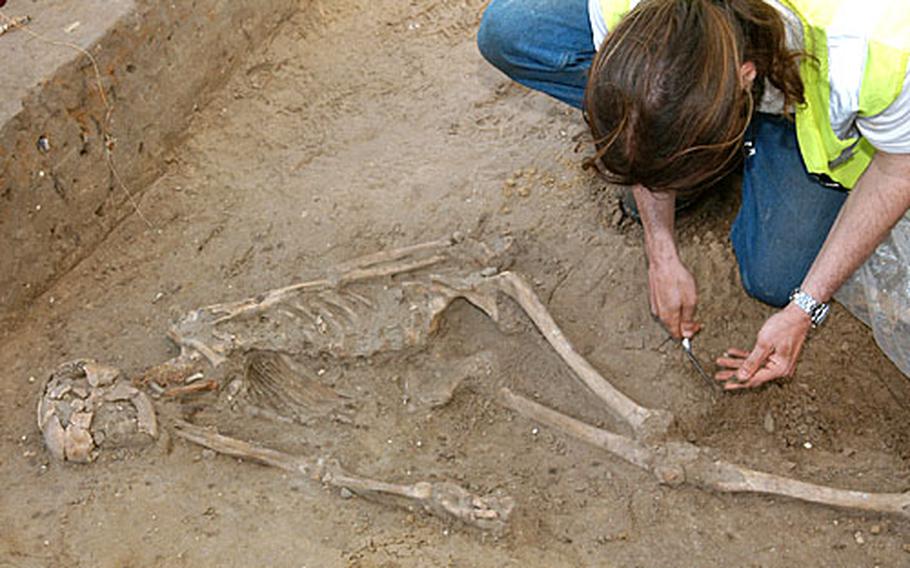 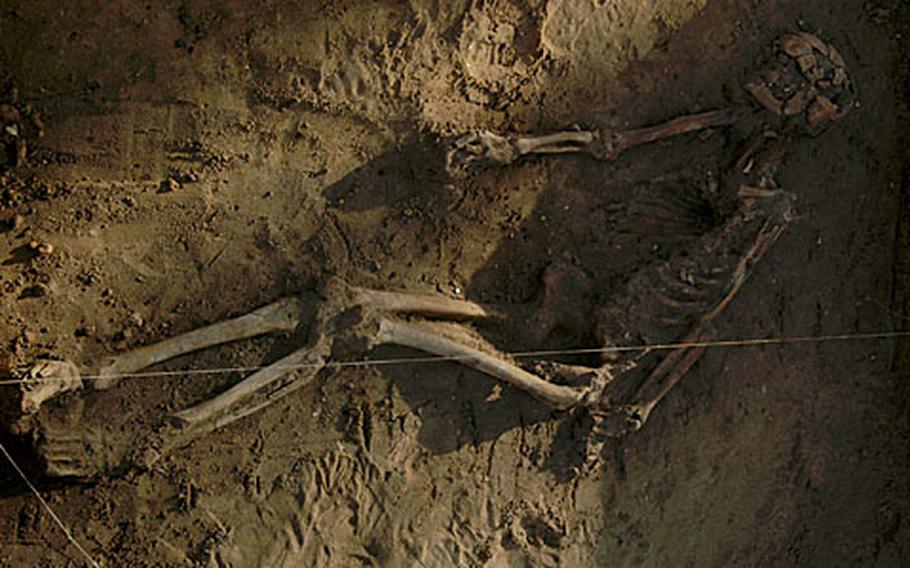 The skeleton of a Roman-era person believed to have been buried about 1,900 years ago lies in a shallow ditch at a building site in Beck Row Wednesday just before archaeologists removed the bones. (Ben Murray / S&S)

BECK ROW, England &#8212; Archaeologists at a construction site for houses near RAF Mildenhall have uncovered a complete human skeleton estimated to be about 1,900 years old.

The preserved bones, believed to have been buried in the first or second century during the late Iron Age, were found Monday by Suffolk County Council archaeology service worker John Sims as he excavated a Roman-era trench at the site.

&#8220;This person appears to have been placed in what was an open ditch,&#8221; archaeology service project officer John Carver said Wednesday.

Carver said human remains are regularly found at construction sites in the area, but a specimen as complete as the Beck Row skeleton was less common.

Archaeologists were digging out cross sections of ditches believed to have been used for agricultural purposes, possibly drainage or irrigation, when the bones were found, Carver said.

The position of the body &#8211; on its side with one arm stretched out &#8211; and lack of any monument led Carver to believe the person had not been formally buried there, he said.

Clues about the age of the skeleton were found at the construction site in previous weeks, including three first-century broaches, part of another human skull and a complete pig skeleton. In January, archaeologists also found ancient pottery, building materials, a Roman coin and a medieval belt buckle at the site.

The construction is part of an effort by a local developer to build scores of new homes for U.S. airmen and their families just yards from the Mildenhall fence line, though the Air Force has not contracted for the houses.

Sims, who dubbed the skeleton &#8220;Yorrick&#8221; after the skull in Shakespeare&#8217;s &#8220;Hamlet,&#8221; uncovered and sketched the position of the remains before Carver removed them Wednesday afternoon.

The bones will be added to the service&#8217;s collection for further study, Carver said.

The discovery of human remains at Air Force building sites has occurred a number of times in the past, most recently at RAF Lakenheath, when archaeologists dug up the remains of a 4,000-year-old female skeleton and several other sets of remains in the fall of 2005.

In 1998, one of the most famous finds from the region, an Anglo-Saxon warrior buried with his sword, shield, spear and horse, was found at RAF Lakenheath.