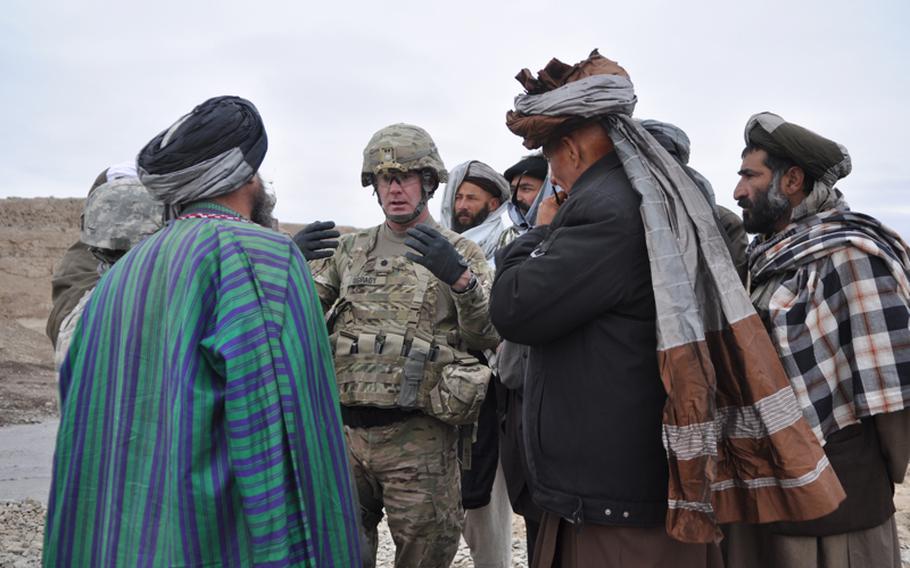 Lt. Col. John O'Grady, commander of 1st Battalion, 84th Field Artillery Regiment, speaks with elders at the opening of a new river crossing near the town of Gormach in western Faryab province. Recently some locals turned in materials that could be used to make roadside bombs; O'Grady's men jumped at it as another opportunity to build rapport. (Neil Shea/Stars and Stripes)

COP GORMACH, Afghanistan &mdash; For the soldiers at this small combat outpost set in moon-dust hills on the cold, northern edge of the war, sometimes you pay your way forward with groceries.

An Afghan contact in this drought-withered region of Faryab province called last week and said a local man wanted to trade in some explosives.

&ldquo;We were like, sure, we can find some stuff we don&rsquo;t want to eat,&rdquo; said McCarthy, commander of Charlie Battery of the 1st Battalion, 84th Field Artillery Regiment, based in Baumholder, Germany.

His soldiers offered 200 pounds of flour and 30 pounds of rice. The Afghan handed over five Soviet-era mortars and two so-called &ldquo;submunitions,&rdquo; similar to the small anti-personnel charges used in cluster bombs.

The Americans didn&rsquo;t ask too many questions. To them, it meant pulling a few more deadly leftovers off a landscape sown with them, things that might have been used in the next IED attack.

For the Afghans, it meant survival.

Residents of Faryab have suffered through drought for more than 40 years, made acutely worse by neglected infrastructure and continuing security woes.

And maybe it meant some locals were softening, more willing to deal with coalition forces. Even if it was merely the drought pushing them toward the Americans, it was still an opportunity.

While NATO has used trade-in programs in the past &mdash; say, cash for guns or for intelligence tips &mdash; bartering staples was a first, at least here. It was making the most of what you&rsquo;ve got, and the soldiers at COP Gormach have grown used to that.

Because there isn&rsquo;t much call for artillery here, McCarthy&rsquo;s men essentially perform infantry tasks. It isn&rsquo;t a new role for artillery, the so-called King of Battle; the recent wars in Iraq and Afghanistan have forced conventional arms of the military to adapt to unconventional jobs.

McCarthy&rsquo;s unit does this with less. COP Gormach sits three hours away by truck from their headquarters in the provincial capital, Maimanah. His platoons are composed of about 20 soldiers, roughly half a typical infantry platoon.

When they arrived early this spring, they moved onto smoldering ground where the local Pashtun population despised the Uzbek-dominated police and were happy to allow Taliban fighters room to maneuver.

McCarthy&rsquo;s commander, Lt. Col. John O&rsquo;Grady, told him to hurry up and make friends. &ldquo;Find somebody and establish a meaningful relationship,&rdquo; he said. &ldquo;Just do it.&rdquo;

So McCarthy and his artillerymen cast around for allies as spring floodwaters cut off Gormach from the rest of the province.

It&rsquo;s been a slow, violent journey. But one of their first friends was the Afghan contact who brought them the food-for-mortars deal. And he was another example of the kind of elasticity this war demands &mdash; he had once been a member of the Taliban.

&ldquo;Even though he might have shot at you at one time?&rdquo; I asked.

&ldquo;Yeah, well, he turned before we got here. It is what it is.&rdquo;

Slowly, he and his commanders said, things have improved here. Making friends, bartering for weapons, all these efforts are small parts of it. McCarthy said he knew he was being tested by the locals, to see what he&rsquo;d do. He said he&rsquo;d trade food for weapons again, given the chance.

&ldquo;When you get a friend in this area, you gotta latch on with both hands,&rdquo; he said.