1-77th preparing for return to Iraq later this year 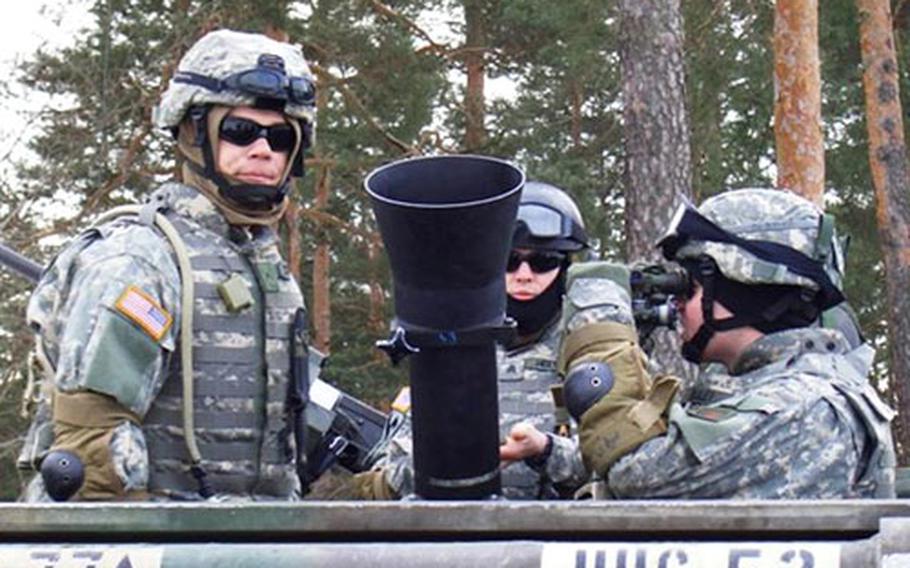 Soldiers from the 1st Battalion, 77th Armored Regiment have spent the past few months preparing for their next Iraq deployment. The unit, which is at the Grafenwöhr, Germany, training area this month, will be combat-ready by the end of March, says Lt. Col. Micioto Johnson. (U.S. Army)

GRAFENW&#214;HR, Germany &#8212; A year ago, soldiers from 1st Battalion, 77th Armored Regiment returned from Iraq. By the end of next month, the tankers will be ready to go back into combat.

The battalion commander, Lt. Col. Micioto Johnson, who trained with his soldiers at Grafenw&#246;hr on Thursday, said his unit &#8212; which deployed to Iraq from February 2004 to February 2005 &#8212; would be combat-ready by the end of next month.

Retraining started with individual soldiers, then tank crews and sections working on skills.

The final phase of 1-77&#8217;s retraining is platoon live-fire exercises at Grafenw&#246;hr this month. &#8220;This is the capstone event of our retraining. Is also happens to be preparation for another deployment,&#8221; Jacobi said.

The platoon live-fire training is based on the sort of missions an armor platoon might receive in Iraq, said Staff Sgt. Brian Hall, 38, of Knoxville, Tenn.

&#8220;In the past our targets were tanks and armored personnel carriers based on a Cold War threat. We have changed it to insurgents mounted on trucks with machineguns and dismounted troops,&#8221; Hall said.

Company B soldier Staff Sgt. Kevin Jackson, 32, of Marion, Ind., trained on Grafenw&#246;hr&#8217;s Range 301 on Thursday in slushy snow that made driving the tanks difficult. And foggy conditions meant no live-fire and no air support.

&#8220;There has been 60 percent turnover in personnel since we got back from Iraq. The key thing is for young soldiers to take the training seriously and take a full opportunity when we get our there with real bullets so when they deploy they are ready,&#8221; said Jackson, a four-year 1-77 veteran who was with the unit the last time it did the training, two and a half years ago before its last Iraq deployment.

In Iraq the unit got hit with everything from small arms to improvised explosive devices, Jackson recalled.