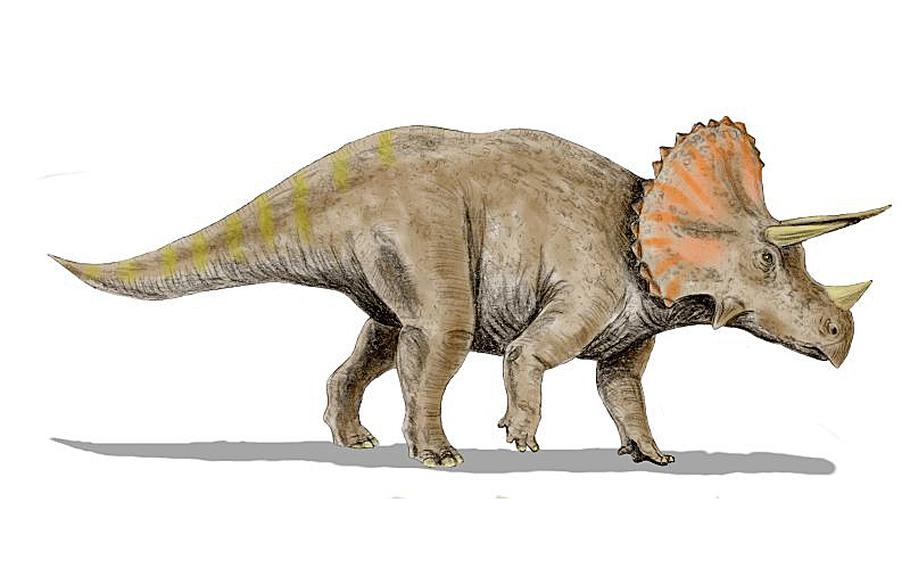 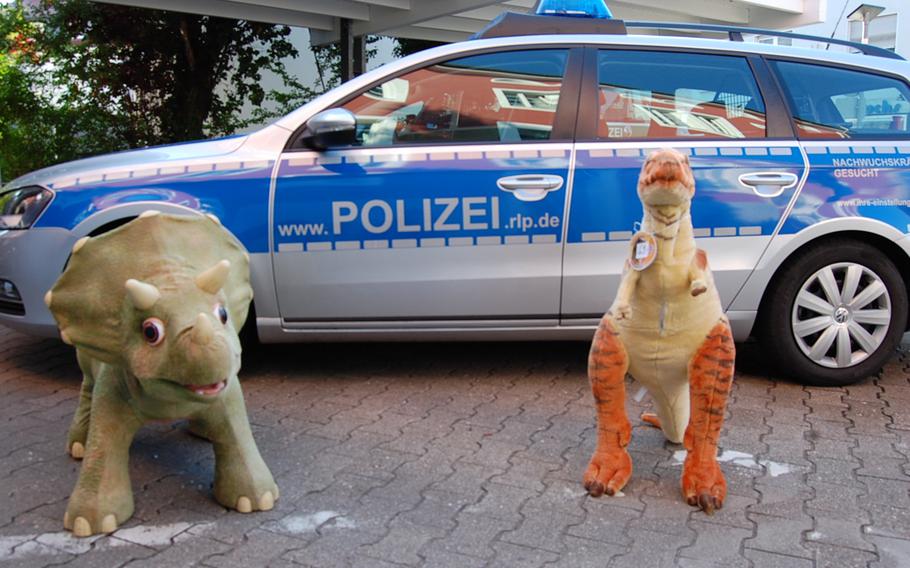 These two dinosaurs were among objects stolen from Kaiserslautern, Germany's Gartenshau attraction on Wednesday, Aug. 28, 2013. (Courtesy of Westpfalz police) 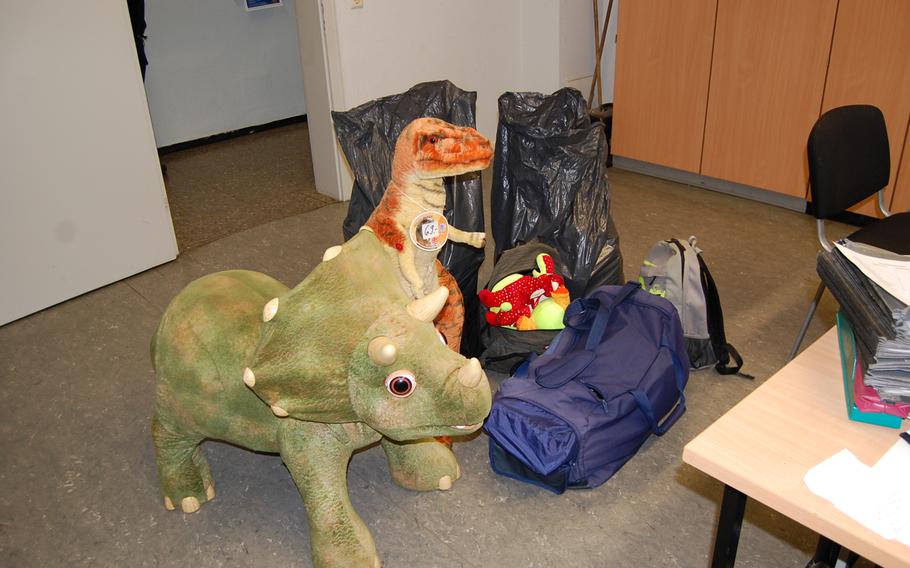 Dinosaurs sit among other objects stolen from the Gartenshau park in Kaiserslautern, Germany, on Wednesday night, Aug. 28, 2013. (Courtesy of Westpfalz police) 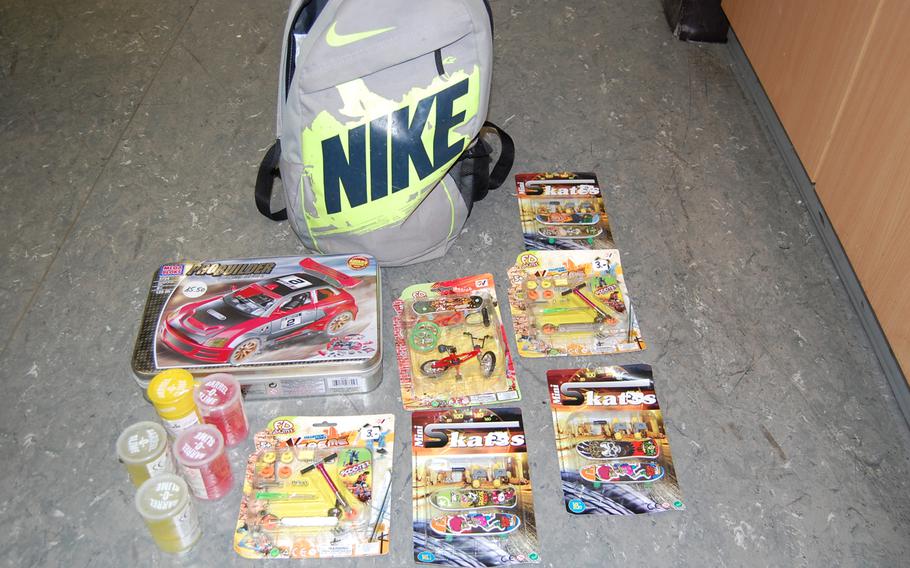 Children's toys were among the objects taken from Kaiserslautern, Germany's Gartenshau park on Wednesday night, Aug. 28, 2013. (Courtesy of Westpfalz police) 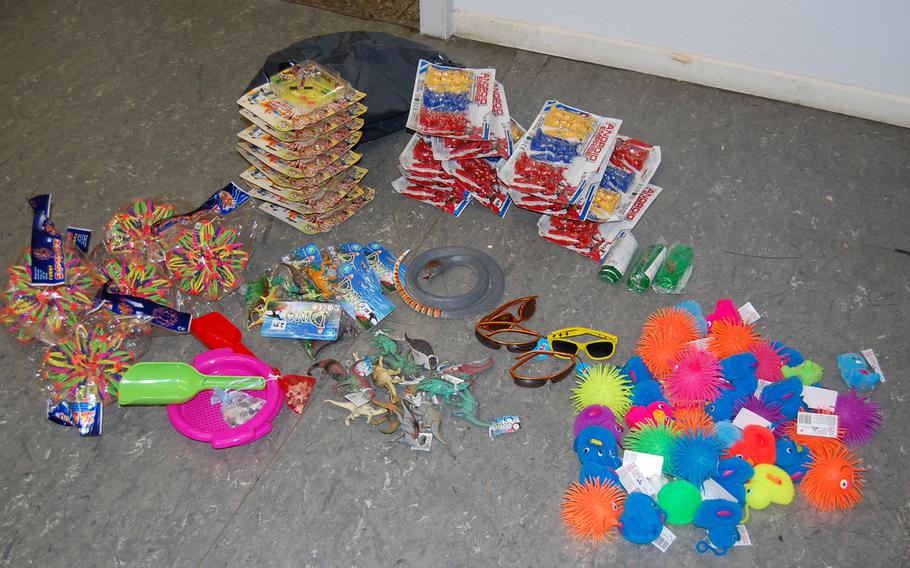 Police said two teens and a 20-year-old had around $1,740 worth of merchandise, including these objects, that was taken from the Gartenshau park in Kaiserslautern, Germany, on Aug. 28, 2013. (Courtesy of Westpfalz police) 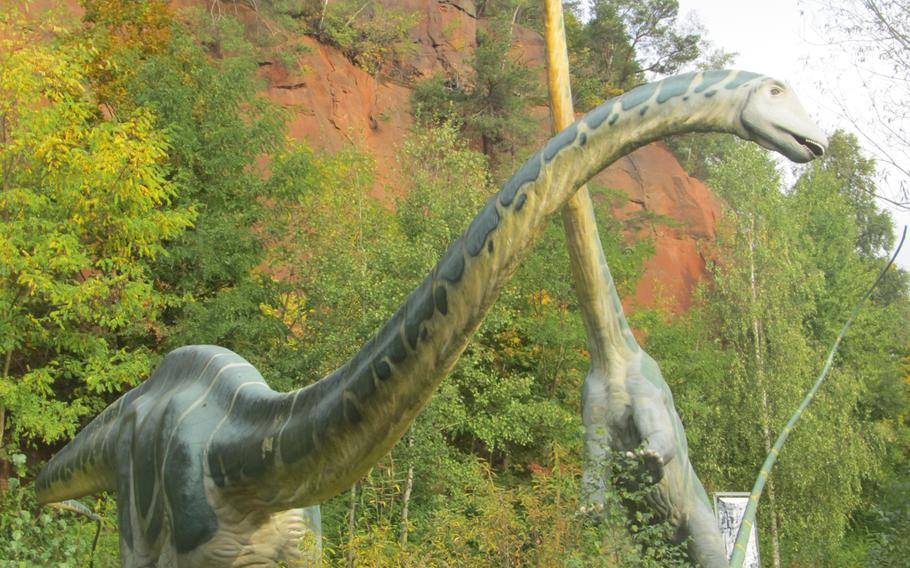 Giant dinosaurs are the hallmark of the Gartenshau park in Kaiserslautern, Germany. On Wednesday, Aug. 28, 2013, thieves stole various objects from the park, including children's toys and a couple of small dinosaurs. ( Jackie Broome/Courtesy to Stars and Stripes)

KAISERSLAUTERN, Germany — It’s hard to hide a dinosaur —even a fake one.

Two teens and a 20-year-old found that out Wednesday night when they were nabbed by police with about $1,740 worth of plush and plastic dinosaurs and other toys they allegedly stole from a local business.

U.S. military police in Kaiserslautern had not heard of the case as of early Thursday afternoon and did not know whether the 16-year-old has any affiliation with the U.S. military.

A woman saw the trio late Wednesday evening on the grounds of the closed Gartenshau, a local attraction that features replicas of dinosaurs in a parklike setting near downtown Kaiserslautern. She called the police at about 10:40 p.m. to report that they had what looked like dinosaurs they were taking away.

Soon after, police found the three carrying several bags and large, black trash bags on a busy street, according to a statement posted online Thursday by the Westpfalz police. One of the alleged thieves had among his stash a triceratops that in a police photo looked to be about as tall as the wheel of a police car.

Another of the alleged thieves had a stuffed tyrannosaurus rex.

According to police, the three admitted to stealing the items from the store at the Gartenshau. Other items in their haul included children’s sunglasses, a toy snake and a pink, heart-shaped pillow with a cartoon bear on it.

The three now face criminal prosecution, according to German police.