1-4 soldiers' loyal opposition prepares others for Iraq and Afghanistan 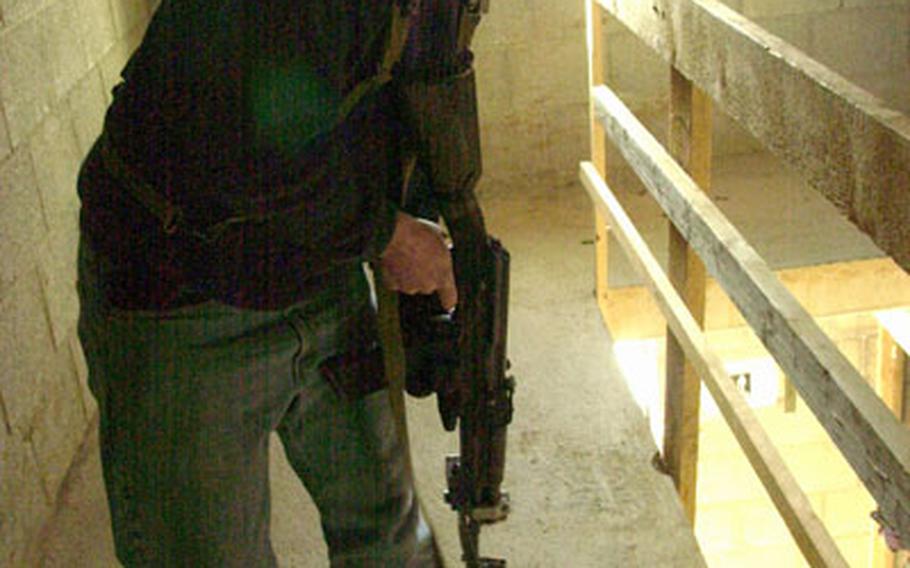 HOHENFELS, Germany &#8212; If you asked the average GI to swap his uniform for civilian clothes, hang out with female university students and attack other soldiers with training lasers and mock explosives, most would jump at the chance.

&#8220;We aren&#8217;t invited to the big game or the Super Bowl (the wars in Iraq and Afghanistan). We are training people to go there. Success for us is less soldiers dying or getting wounded in combat because we trained them the best we could. Success is when we were a harder enemy than the one they are going to face in Afghanistan or Iraq,&#8221; he said.

During exercises at Hohenfels, 1-4 soldiers live in mock Iraqi or Afghan villages and take on many roles. One day they might play Afghan insurgents, the next they might be Iraqi soldiers, police officers, civilians or aid workers, Delass said.

To stay current with the latest trends downrange 1-4 sent Company A to Afghanistan in 2004. And Team Cherokee, based around Company C, will go there in the summer, he said.

The role-playing at Hohenfels was good training for Afghanistan, said Marshall, whose Combat Infantryman Badge includes a star signifying he has come under fire in two theaters &#8212; Iraq and Afghanistan.

In his 2&#189; years at Hohenfels, Marshall played a police chief, an Iraqi soldier, a civilian and various types of terrorists. Each time he takes on a new role he is given a character sheet listing his character&#8217;s beliefs &#8212; like whether he supports the U.S. presence in Iraq, he said.

&#8220;I was a terrorist and all the other terrorists were dead. I was the last one alive and all I had was a grenade. I walked into this building where a bunch of training troops were and I took out quite a few guys,&#8221; he said.

Another 1-4 soldier, Staff Sgt. Kimo Ortiz, 33, of Bronx, N.Y., was wearing civilian clothes Monday because he was role-playing during a mission rehearsal exercise for the 1st Infantry Division&#8217;s 2nd Brigade Combat Team.

&#8220;We are part of a terror cell that has no regard for whatever we do. We are supposed to kill all the U.S. forces and if somebody gets in our way we kill them as well,&#8221; explained Ortiz, who has been with 1-4 for a little more than a year.

&#8220;This is my fifth mission rehearsal exercise. I have played civilians and a different type of terrorist that just targets U.S. forces,&#8221; he said.

&#8220;To play your character you have to blend in with the other people on the battlefield. You are walking around, talking, acting like you are buying clothes or going to the electronic store. Trying to give the blue force as realistic a picture of the town as you can. You are supposed to do it all the time because you don&#8217;t know if there are scouts out there watching,&#8221; he said.

The best moment on the job is when a soldier who is training learns a lesson, Ortiz said.