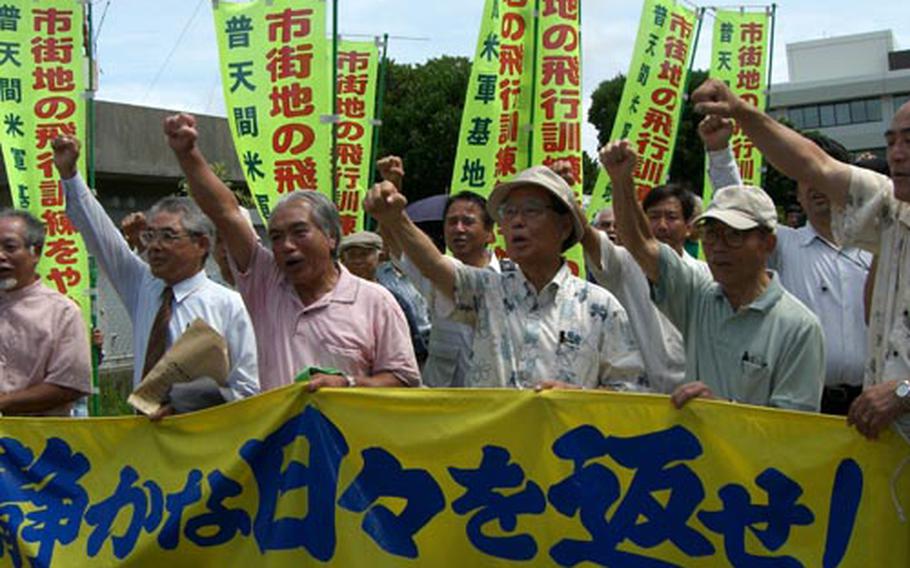 About 100 residents and their supporters Thursday gather at the Okinawa Branch of Naha District Court in Okinawa City to hear the ruling on a six-year lawsuit. (Chiyomi Sumida / S&S)

About 100 residents and their supporters Thursday gather at the Okinawa Branch of Naha District Court in Okinawa City to hear the ruling on a six-year lawsuit. (Chiyomi Sumida / S&S) Residents claimed they suffer from damages causes by aircraft noise from the air station. They sought compensation and suspension of flight operations between 7 p.m. and 7 a.m. (Chiyomi Sumida / S&S)

OKINAWA CITY &#8212; A six-year court battle between 396 Futenma residents and Tokyo ended here Thursday with a Japanese court ordering the government to pay about $1.3 million for physical and mental damages from noise from Marine Corps Air Station Futenma.

The residents filed the lawsuit in November 2002, claiming the national government was responsible for damages stemming from noise at the air station. They sought $2.5 million and demanded aircraft operations be suspended between 7 p.m. and 7 a.m.

Reading the court&#8217;s ruling, Chief Judge Yoshimitsu Kawai of the Okinawa Branch of Naha District Court said there was sufficient evidence to show the residents were exposed to frequent damaging noise that caused mental suffering. He said the noise interfered with living normal lives, especially affecting the quality of their sleep.

However, he dismissed the residents&#8217; demand to suspend night flight operations, saying the Japanese government has no control over military operations at the air station.

Kawai rejected the government&#8217;s argument to exclude some residents from compensation because they moved to the neighborhood while knowing there was a noise problem. Following Thursday&#8217;s ruling, the lead attorney for the residents, Tsutomu Arakaki, welcomed the decision &#8212; at least in part.

"For the first time since the base was built 63 years ago, the court has acknowledged that the base is harmful to residents," he said. "This is a highly significant event."

"I would say the ruling was 30 percent of our satisfaction," said Zenji Shimada, who led the residents. "We did not fight for money. What we earnestly seek are quiet nights. As long as noise continues, we will continue to suffer."

He said the group will appeal.

Marine spokesman 1st Lt. Judd Wilson said the ruling was "a matter between local Okinawans and the government of Japan."

Wilson acknowledged "existing concerns to reduce noise" and said the Corps has "implemented and adhered to several measures to reduce the effects of aircraft noise."

During the past decade, some noise-reduction measures have been taken around Futenma and Kadena Air Base. In 2005, the Japanese government spent 4.3 billion yen (about $37.4 million) to soundproof homes near both bases. And training and flights on Futenma are limited on holidays, school test days and at night.

Ro Manabe, director of the Naha Defense Bureau of the Japan Ministry of Defense, said he welcomed the ruling, in part. He agreed with the court&#8217;s denial to stop night flights, but not with the compensation awarded to the residents.

Manabe said the ministry will continue to seek an early closure and relocation of Futenma, which is slated to be replaced by a new air station to be built on Camp Schwab by 2014.

Stars and Stripes reporters David Allen and Natasha Lee contributed to this report.