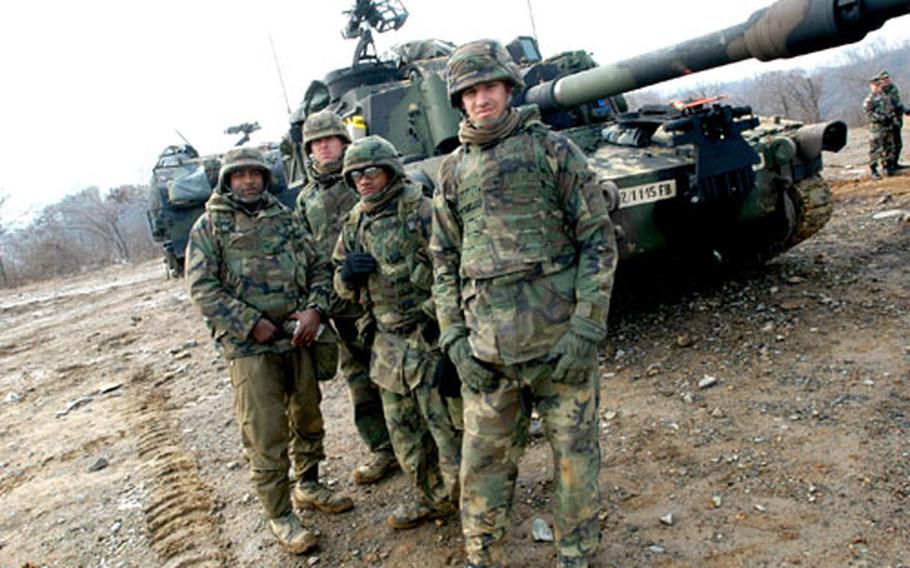 The crew that earns &#8220;Top Gun&#8221; recognition in the unit takes home the coveted red muzzle brake cover, something that will make their Paladin Howitzer stand out from the other 1-15 guns, said battalion executive officer Maj. Patrick Quinn, 36.

The four sections assembled for the contest Thursday at Firing Point 64, a muddy field overlooking a river just south of the Demilitarized Zone separating North and South Korea.

&#8220;Independent graders from across the battalion run them through all the tasks they are required to perform to achieve mission readiness,&#8221; Quinn said.

The contest started with basic maintenance tasks. Soldiers disassembled and reassembled their howitzer&#8217;s firing mechanism in the first lane. Then they moved to initializing the computer targeting system and going through all the procedures they would follow if they were preparing to roll out and conduct a fire mission, he said.

In the third lane, they occupied a firing position and processed a simulated fire mission. The final lane involved an emergency fire mission, Quinn said.

&#8220;While they are driving between two points they get a fire mission. They have to stop, process the mission and (dry) fire the round,&#8221; he said.

Blackwell said his crew could disassemble their Paladin&#8217;s firing mechanism into about a dozen pieces and reassemble it in about two minutes.

The crew members had different motivations going into the contest.

Paladin driver Pfc. Fred Benjamin, 20, of Hawaii, wanted to win because it was his first attempt at Top Gun.

Meanwhile, at another nearby firing point the other 1-15 guns fired in support of 2nd Battalion, 9th Infantry Regiment, which was doing live-fire gunnery at Rodriguez Range.

2nd Platoon, Battery A, 1-15 platoon leader 1st Lt. Jarod Parker, 24, of Woodlands, Texas, who was waiting to fire into the range, was hoping a section from his platoon would win Top Gun.

This week, 1-15 will start a platoon-level competition that will involve opposition forces, snipers, civilians on the battlefield and media role players, Quinn said.