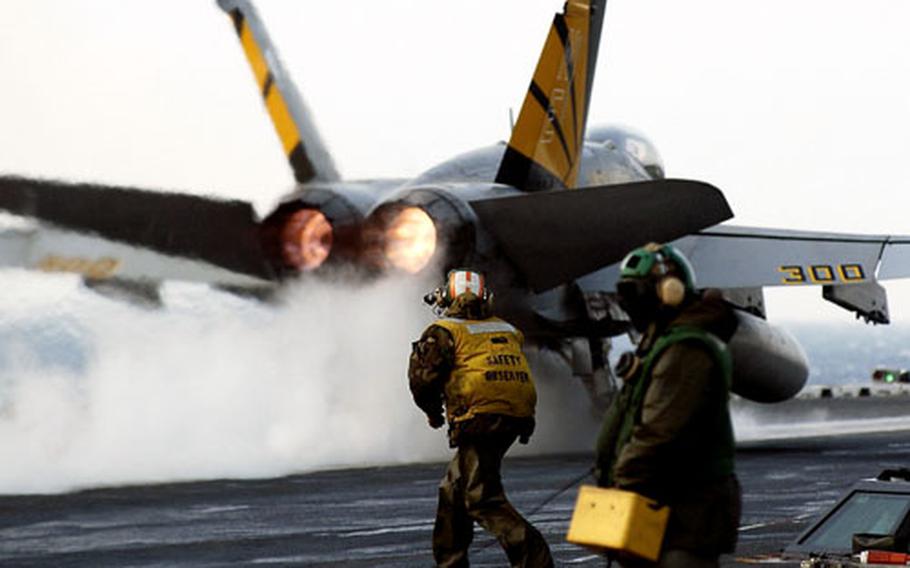 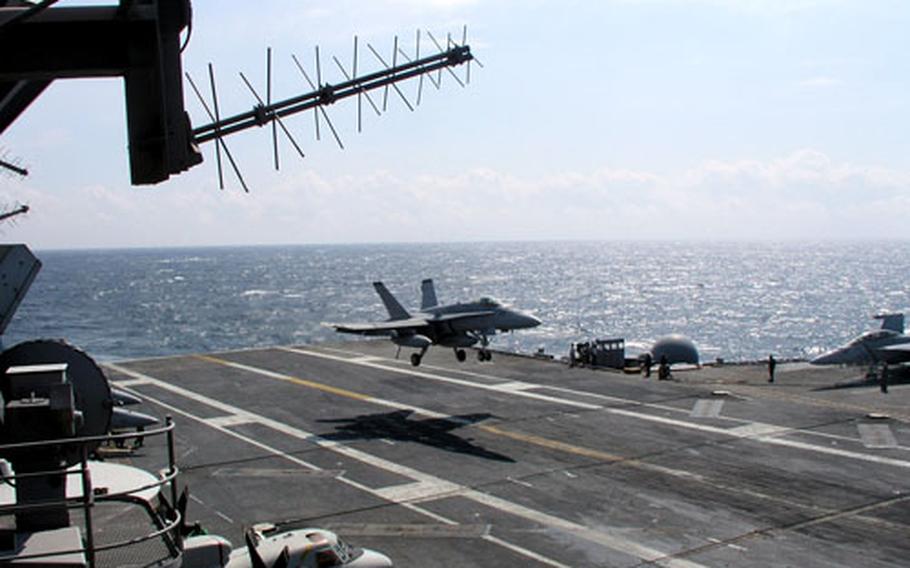 An F/A-18 comes in for landing aboard the carrier USS Abraham Lincoln. The carrier was taking part in an exercise off the coast of the Korean peninsula. (Franklin Fisher / S&S) 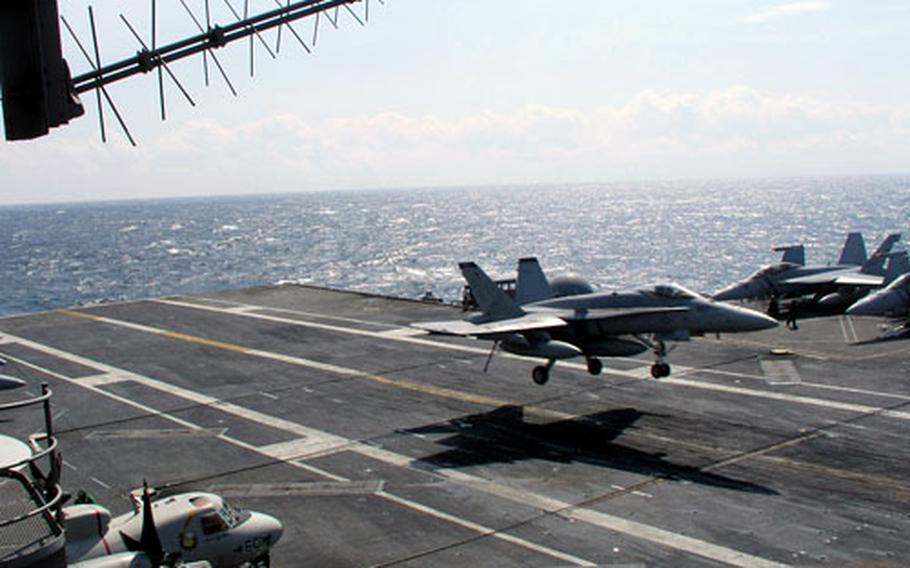 An F/A-18 comes in for landing aboard the carrier USS Abraham Lincoln. (Franklin Fisher / S&S) ABOARD THE USS ABRAHAM LINCOLN &#8212; It&#8217;s a cold March afternoon at sea some 120 miles southeast of the Korean peninsula. A bustling team of sailors in color-coded vests are positioning U.S. Navy warplanes for launch into hazy skies.

On this Thursday afternoon, the Lincoln &#8212; the length of two football fields &#8212; has turned itself southeast so it can catapult its aircraft headlong into 29 mph winds blowing over whitecapped, steel-blue seas. The ship&#8217;s thermometers read 32 degrees.

About six to 11 miles off the port beam, the cruiser USS Mobile Bay, like a gray cardboard silhouette on the horizon, keeps station with the Lincoln in its role of protective screen for the carrier.

The ships are part of the Navy&#8217;s Carrier Strike Group 9, which was in the area to take part in a week of annual training exercises with South Korean forces that ended Friday.

The nuclear-powered Lincoln is equipped with four steam catapults. Its deck crews can launch a plane every 30 seconds. Crews wearing safety helmets and clad variously in the color-coded vests &#8212; green, yellow, red, among others &#8212; dash about the flight deck with each launch and landing.

During one half-hour period, the Lincoln launched and recovered about 10 planes. Some were the F/A-18 Hornet fighter and the EA-6B Prowler, a four-seat electronic warfare aircraft whose high-tech communications gear can jam enemy radar and radios.

In readying an F/A-18 for launch, the crew first guides it into position over a long, thin slot in the deck that runs out from one end of the catapult station. Crewmembers attach the plane&#8217;s nosegear to a hook, and once the pilot has brought the engines to full power, the crew fires the catapult and the plane bolts from 0 to 184 mph in less than two seconds.

As the Hornet hurls down the slot, white steam roils up from the machinery below decks. Once clear of the deck, the plane roars skyward and banks into the next leg of its flight path, thin streaks of black smoke unraveling along its trail.

When landing, the pilot maneuvers the plane so its tailhook will catch on one of several arresting cables stretching across the flight deck. When the tailhook catches, the plane&#8217;s forward motion hauls the cable behind it for hundreds of feet, stretching it into a V-shape before the plane jerks to a stop.

Crews quickly bring the cable &#8212; resembling a brown garden hose &#8212; back into place, ready for the next landing.

The Lincoln, based in Everett, Wash., is one of the Navy&#8217;s eight Nimitz-class carriers and the fifth built in the series.