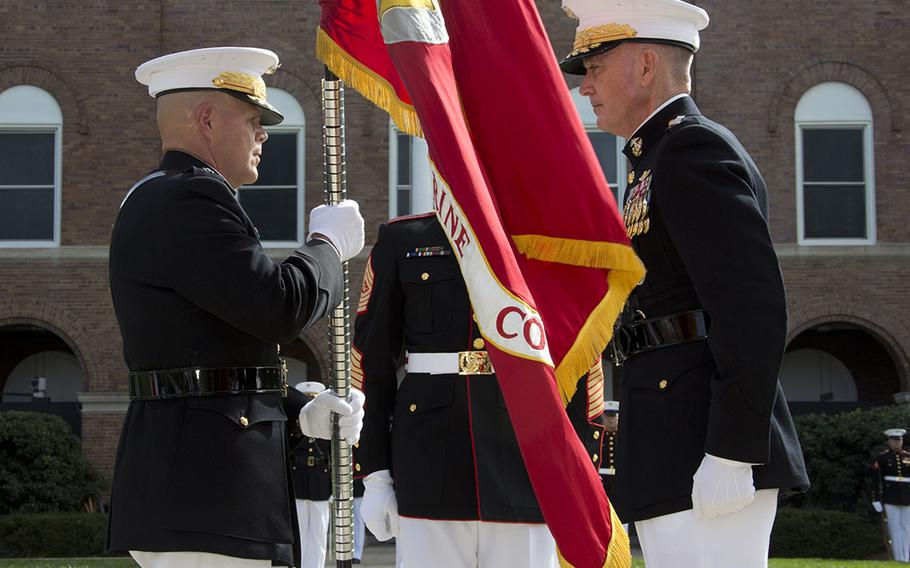 WASHINGTON — Hailed as “a tested warrior and an innovative strategist,” Gen. Robert Neller accepted command of the U.S. Marine Corps on Thursday morning during a traditional ceremony at Marine Barracks Washington.

Neller — who was pinned with a fourth star Thursday — became the Corps’ 37th commandant, taking over for Gen. Joseph Dunford, who held the post for less than a year. Dunford will become the 19th chairman of the Joint Chiefs of Staff on Friday during a ceremony at Joint Base Myer-Henderson Hall, Va., replacing retiring Army Gen. Martin Dempsey.

Describing Dunford as an “out in front” and “awe-inspiring” leader, Defense Secretary Ash Carter said the general was his and President Barack Obama’s “first and obvious choice” to replace Dempsey.

“I speak for everyone when I say how fortunate we are that Joe’s council and wisdom will continue to guide our nation’s security for years to come,” Carter said.

“Whether he was commanding a Marine security force company or the 3rd Marine Division he’s led with conviction and has earned the respect of every Marine under his charge,” Navy Secretary Ray Mabus said, adding that the career infantry officer had earned “a reputation for being no-nonsense and direct.”

His abilities, Mabus said, will help ensure the continued success of the Corps even as it faces shrinking budgets and multifaceted missions across the world.

“With the security situation around the globe, with the situation here in Washington, Commandant Neller will have his hands full,” Mabus said. “But like Commandant Dunford, I am absolutely certain that he will rise to the challenges, see them as opportunities and seize his time to assure that the Marine Corps remains the most effective expeditionary fighting force the world has ever known.”

Thanking his family, senior defense leaders and the Marine Corps for entrusting him with his new position, Neller praised Dunford for his accomplishments during his short tenure as commandant. He pledged to continue the work of Dunford to ensure the Corps is prepared for anything in an “unstable and unpredictable” world.

“It’s a great honor and privilege to take this on,” Neller said. “Let’s go do this.”