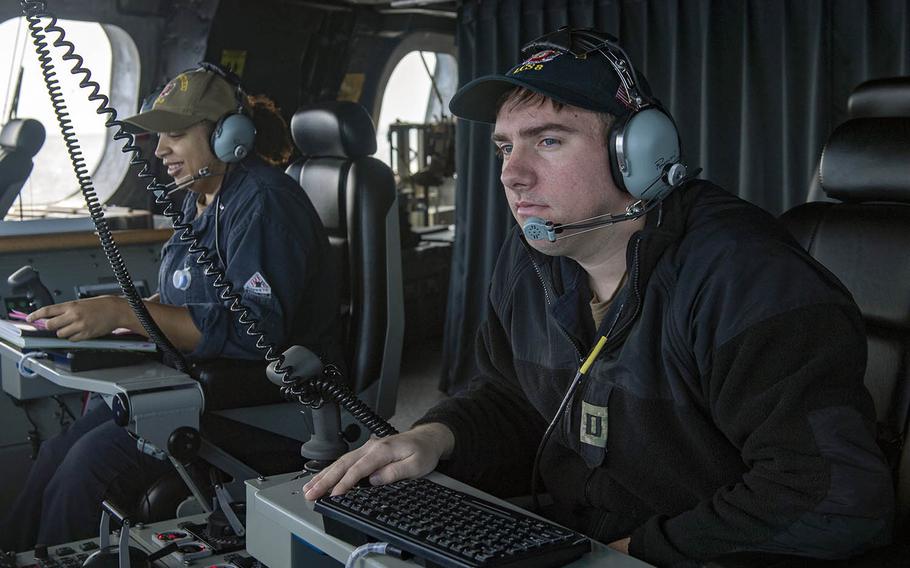 YOKOSUKA NAVAL BASE, Japan — The Navy on Saturday sent a warship steaming past two of the seven features China has militarized in the South China Sea to challenge restrictions imposed on innocent passage, according to the 7th Fleet.

The USS Montgomery operated near Johnson and Fiery Cross reefs in the Spratly Islands, according to Navy photos from the advanced littoral combat ship. The mission marked the first South China Sea freedom-of-navigation operation reported in 2020.

The operation challenged attempts by China, Vietnam and Taiwan to “require either permission or advance notification before a foreign military vessel engages in ‘innocent passage’ through territorial seas,” which are inconsistent with international law, 7th Fleet spokesman Lt. Joe Keiley said in an email Tuesday.

Keiley said the Montgomery’s crew did not notify the countries or ask permission before cruising by the reefs, demonstrating “that innocent passage may not be subject to such restrictions.”

“Under international law as reflected in the Law of the Sea Convention, the ships of all states — including warships — enjoy the right of innocent passage through territorial seas,” he said.

Territorial seas extend 12 nautical miles from a nation’s coastline, according to international law.

Johnson and Fiery Cross reefs are among the seven Spratly Island land features China has militarized, according to the Asia Maritime Transparency Initiative. Vietnam and Taiwan also claim the reefs.

The Spratlys are made up of approximately 100 land features, all of which are claimed by China, Vietnam and Taiwan. The Philippines, Malaysia and Brunei also lay claim to portions of them, Keiley said.

The United States does not recognize any nation’s sovereignty over the Spratly Islands.

China’s efforts to extend its influence in the region are considered most aggressive. In August, for example, the Pentagon accused Beijing of “bullying tactics” against other nations bordering the South China Sea.

Military forces of countries that lay claim to the Spratlys occupy about 45 of the islands, according to the CIA World Factbook. China has built up and militarized seven of them, according to the Asia Maritime Transparency Initiative. The region is rich in fishing grounds and untapped oil and gas deposits.

Freedom-of-navigation operations are conducted for many reasons, but generally challenge other nations’ claims that restrict free passage and defy international law. “Freedom of navigation operations in the South China Sea are a part of daily operations of U.S. military forces throughout the region,” Keiley said.