Navy tells lodges to put removed Bibles back into rooms 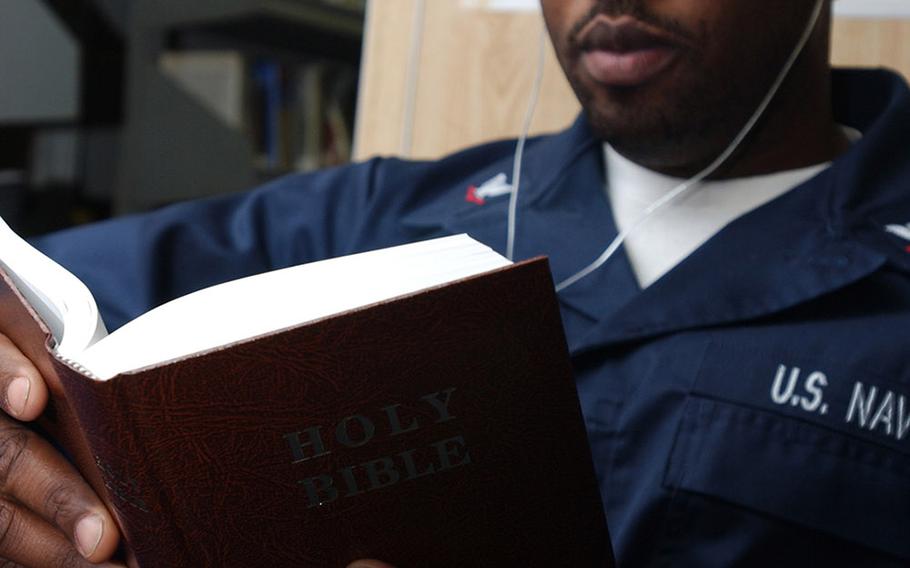 WASHINGTON — Gideons Bibles are going back into Navy lodges.

The Navy on Thursday ordered the Bibles returned to rooms and said it is reviewing a decision by the Navy Exchange to remove them from its worldwide network of military hotels.

Atheists had cheered a victory after a complaint prompted the exchange to begin moving the Bibles to its lost-and-found bins this summer, but the Navy said the decision was made without consulting senior leadership.

“That decision and our religious accommodation policies with regard to the placement of religious materials are under review,” Navy spokesman Cmdr. Ryan Perry wrote in an email to Stars and Stripes. “While that review is under way, religious materials removed from Navy Lodge rooms will be returned."

Bibles donated by Gideons International are a common sight in Navy lodges and at hotels around the world.

The Navy Exchange sent a memorandum in June to all its lodge managers saying the Bibles and all religious materials left in rooms will be removed using “established procedures for lost-and-found property.”

In the meantime, managers were ordered to “refer all inquiries about placing religious materials including Bibles to the chaplain’s office for the military installation where the lodge is located,” according to the memo written by Bill Mayhue, the Navy lodge program regional manager. It was signed off on by the director of the Navy Exchange lodges program.

“This will allow the commanding officer to determine … whether the materials will be accepted and how they will be handled and distributed,” Mayhue wrote.

The memo was prompted by a complaint in March by the Freedom from Religion Foundation, a Wisconsin atheist group that claims 21,000 members including hundreds of active-duty troops and veterans.

The group sent a letter claiming the Navy is showing an unconstitutional preference for Christianity. Staff attorney Sam Grover said a couple of members had served more than 20 years in the military and said they had never seen any other religious text in Navy lodging other than the Bible.

“That demonstrates the Navy’s preference for Christianity over all other religions and nonreligious sects,” he said.

Grover said the Freedom from Religion Foundation does not expect Bibles or other religious materials to disappear from lodges. Instead, chaplains could make the Bible available to those who request it or Navy lodges could supply a collection of religious and atheist texts at the front desk, he said.

The group suggested lodges offer patrons the Born Again Skeptics Guide to the Bible, which is sold through its website.

The brief removal of Bibles caused some outrage from religious groups.

The Chaplain Alliance for Religious Liberty, which advocates for the free practice of religion in the military, called it an act of censorship and criticized the Navy for bending to the atheist complaint.

“It’s tiresome to see senior military leaders needlessly cave in to activist groups offended by anything Christian,” Ron Crews, a retired colonel and chaplain who is the executive director of the group, said in a released statement.