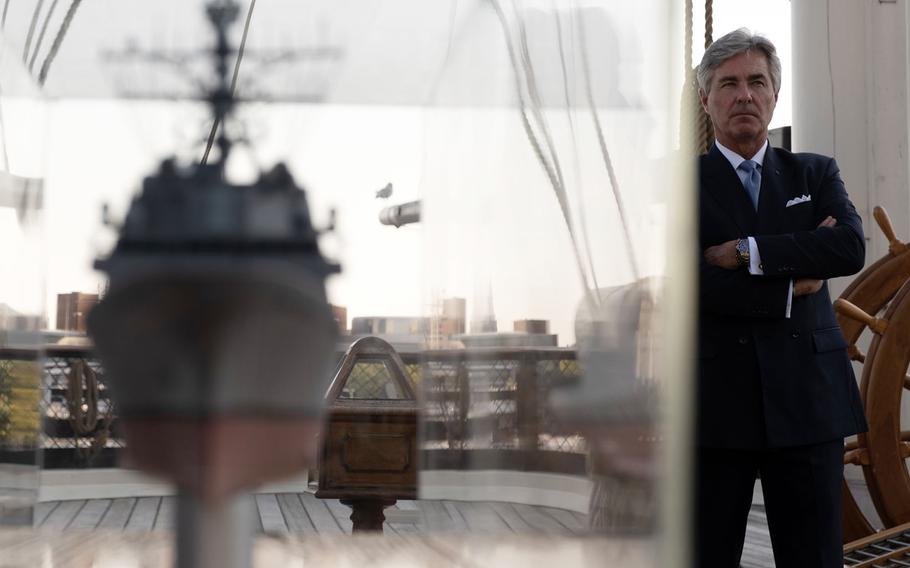 The United States should boost its military presence in the Indo-Pacific region with a new numbered fleet, possibly based in Singapore, according to the U.S. Navy’s top civilian leader.

Navy Secretary Kenneth Braithwaite on Tuesday called for the reactivation of the 1st Fleet to increase U.S. power in a region where it is being challenged by a rapidly growing Chinese military machine, USNI News reported that day.

“We want to stand up a new numbered fleet. And we want to put that numbered fleet in the crossroads between the Indian and the Pacific oceans, and we’re really going to have an [INDOPACOM] footprint,” Braithwaite told the Naval Submarine League’s annual symposium, according to the magazine.

The 7th Fleet, based at Yokosuka Naval Base, Japan, is the only U.S. fleet in the region. It includes the Ronald Reagan Carrier Strike Group, which is supported at times by ships from the San Diego-based 3rd Fleet.

Seventh Fleet is the Navy’s largest deployed fleet with 50-70 ships and submarines, 150 aircraft and approximately 20,000 sailors assigned to it. Its almost 48 million-square-mile operations area stretches from the International Date Line in the central Pacific to the India/Pakistan border and from the Kuril Islands in the north to the Antarctic in the south.

But the Navy can’t just rely on 7th Fleet to cover that area, Braithwaite said.

Its ships deploy frequently for missions such as freedom-of-navigation patrols in the South China Sea, where China has built military bases on artificial islands in disputed waters.

Meanwhile, China’s navy has been growing rapidly. In September, Beijing sent both of its aircraft carriers to sea as construction on a third continued.

“We have to look to our other allies and partners like Singapore, like India, and actually put a numbered fleet where it would be extremely relevant if, God forbid, we were to ever to get in any kind of a dust-up,” Braithwaite said.

A new fleet could provide a much more formidable deterrent, he said.

“So we’re going to create the First Fleet, and we’re going to put it, if not Singapore right out of the chocks, we’re going to look to make it more expeditionary-oriented and move it across the Pacific until it is where our allies and partners see that it could best assist them as well as to assist us,” he said.

The 1st Fleet previously existed from just after World War II to the early 1970s.

INDOPACOM referred a query about Braithwaite’s comments to the Navy’s chief of information, whose office didn’t respond to emails Wednesday.

Braithwaite’s spokesman, Capt. Jereal Dorsey, told Stars and Stripes in an email Friday that no decisions have been made regarding the establishment or location of an additional numbered fleet in the region.

From a geographical and infrastructural standpoint, Singapore would be a good place for a new fleet given its location, port facilities and potential to develop support capabilities, according to Ian Chong, an associate professor of political science at the National University of Singapore.

However, supporting it would be “quite an undertaking,” especially if it included a carrier strike group. And it would entail working on the sensitivities of neighboring countries, as well as China, he said in an email Wednesday.

Subic Bay in the Philippines could be an alternative, although local support seems uncertain. Likewise, there might not be support for a base in Malaysia or Indonesia and facilities in those countries would take longer to bring up to standard, Chong said.

“Another possibility is Cam Ranh Bay in Vietnam, but it is unclear if this is something the Vietnamese public and government are ready for. Even though Thailand is a U.S. treaty ally, I am not sure they would be ready to host a fleet either,” he said.

Some have speculated about the Navy establishing a presence on India’s Andaman Island, which is near Singapore.

“The fact the area is less populated could make it less politically sensitive,” he said. “It is also near the northern end of the Strait of Malacca and relatively close to Southeast Asia.

“However, getting facilities ready would take a while — not to mention a lot of effort, time, and money.”