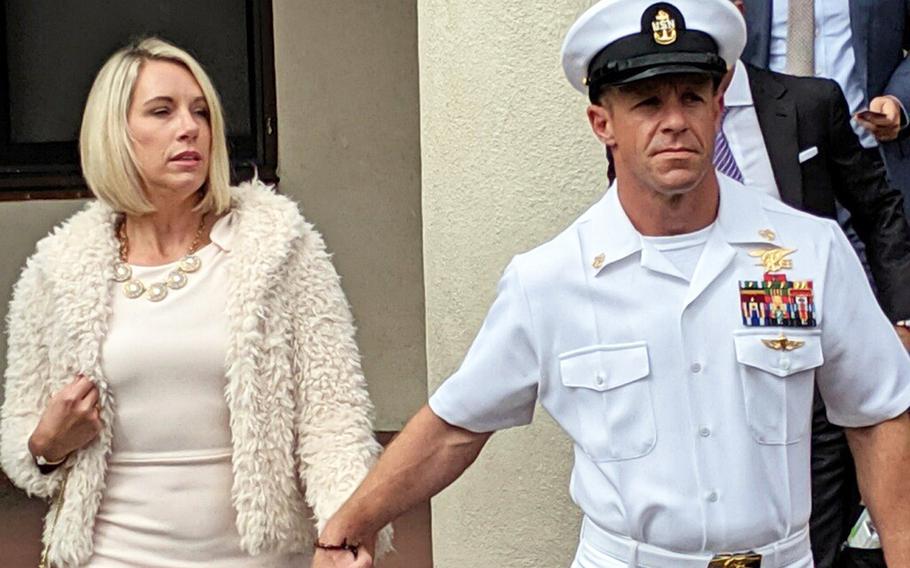 Navy SEAL Chief Edward R. Gallagher and his wife, Andrea, leave the courthouse at the during his trial in November, 2019. (Andrew Dyer, San Diego Union-Tribune/TNS)

WASHINGTON — Navy and Marine Corps lawyers have failed to learn from past mistakes and many of them display a lack of basic ethics in their approach to cases, according to a review of the services’ judge advocate general corps released Friday.

The review, which Navy leaders billed as the largest probe of its JAG corps ever conducted, blasted a lack of a professional culture within that corps. The probe was launched in the wake of a string of problems within the Navy’s legal community culminating with the chaotic, and ultimately, unsuccessful, prosecution during the summer of Navy SEAL Eddie Gallagher on war crimes.

However, officials cited cases stretching back to 2015 as reasons why the Navy’s legal systems needed inspection. In August, the review was expanded to include the Marine Corps’ JAG corps.

The review was conducted by a panel of experts, who were advised to focus on critical areas within the JAG corps, including its culture, organizational structure and unlawful command influence. The Navy and Marine Corps are now establishing oversight teams to make certain that the recommendations in the review are implemented, service leaders said Friday.

The panel found the Navy needs to “embrace a learning culture” in which there is self-assessment and feedback on lessons learned. They also found the Navy and Marine Corps’ professional responsibility programs “lack regular, structured training” and need to build on relationships with other legal communities and foster professional interaction.

The culture of the legal profession in the Navy and Marine Corps is the “top priority to get after,” said Adm. Robert Burke, the vice chief of naval operations.

The former top Navy officials called for the review following the high-profile acquittal of Gallagher, a chief petty officer, on charges that included the murder of a young, detained enemy fighter, and a series of other embarrassing episodes in the Navy’s legal community in recent years.

The Gallagher case had the lead prosecutor, Navy Cmdr. Christopher Czaplak, booted from the case just days before trial after he was caught working with Naval Criminal Investigative Service officials to attempt to track illegally emails of Gallagher’s defense team and a journalist covering the case. During the trial, the prosecution’s star witness, another SEAL, reversed his testimony and claimed to have killed the detained enemy fighter. The SEAL had been granted immunity and he did not face legal repercussions for his testimony.

President Donald Trump, long a vocal supporter of Gallagher, ordered the Navy to revoke awards doled out to prosecutors for their work on the case. Later, Trump restored the SEAL’s rank, which was reduced as punishment for his lone conviction of posing for a photograph with a deceased enemy’s body. Trump also ordered the Navy to allow Gallagher to retire with his trident pin – a symbol of his position within the SEALs – instead of conducting a review of his status in the elite force. Spencer would be forced from his position as the Navy’s top civilian soon after Trump’s order, but he blasted the president’s handling of the case in a letter acknowledging his termination.

Gallagher’s case was not the only embarrassing mark on the Navy JAG corps in recent years. Navy officials cited the handling of a 2015 case against another SEAL in its call for a probe. That case against SEAL Senior Chief Petty Officer Keith Barry saw the military’s highest appellate court throw out a rape conviction on a count of unlawful command influence. The court charged the Navy’s top lawyer at the time, then-Vice Adm. James Crawford, had illegally intervened in the case by pressuring other Navy officials to uphold Barry’s conviction despite doubts about his guilt.

In another high-profile case, Richardson and another admiral were dismissed from their roles in the case against the former commander of a ship that was involved in a deadly collision with a commercial vessel. Ultimately, charges including negligent homicide were dismissed in 2019 against then-Cmdr. Bryce Benson, the commander of the USS Fitzgerald when it collided with a container ship off Japan’s coast in 2017, killing seven U.S. sailors.

Navy and Marine Corps lawyers have to establish a culture in which they all learn from mistakes -- including those high-profiles cases -- to ensure they are not repeated, Burke said Friday.

“To instill the culture you got to establish the processes to repeat it and then just make it a way of life,” he said.

That includes training and education and establishing principles for the legal community including behavior and valuing a learning culture.

Marine Corps Maj. Gen. Gregg Olson, the assistant deputy commandant for plans, policies and operations, is also looking to make the Marine Corps a “culture of learning” and will look at how to refresh the training and education for Marine attorneys as they move from one job to the next.

“We do a very good job in some of our communities of refreshing people as they return to their duties perhaps after they've been away. Aviators, for instance, would go back through a refreshing syllabus as they came back to the cockpit from a tour outside the cockpit. We recognize there's some potential parallels for our lawyers,” Olson said.

Another area of concern highlighted is the lack of resources of the military JAG community in the Navy and Marine Corps. They found issues with the case management and court reporting systems to be inefficient and in some cases ineffective. Staff shortages was also a problem with the Navy as they suffer from “inaccurate manpower requirements, as well as skill sets and development paths that do not meet Navy needs,” according to the review.

The JAG communities have remained small while the workload demand has quadrupled in the last 10 years, Burke said. They are also doing less litigation and providing more legal support in areas such as cyber and environmental law.

The Navy is just now getting to 950 JAG officers, even though that amount was recommended in 2011, he said.

“Institutionally we did not respond to that demand signal,” Burke said. “And that’s going to be the trip wire going forward as we continue to heap additional work on them. Make sure that they’re property resourced going forward.”

Burke said he will be meeting with members of the JAG corps to discuss the findings in the review.

“My message to the JAG Corps is that we have talented judge advocates in the Navy and they're doing great work and providing excellent legal service to our sailors and their families and the commanders that they serve,” he said. “That said, as a team, we've got some things that we can work on to get better. And we'll put our heads to it, and we’ll make those structural changes and those process changes.”