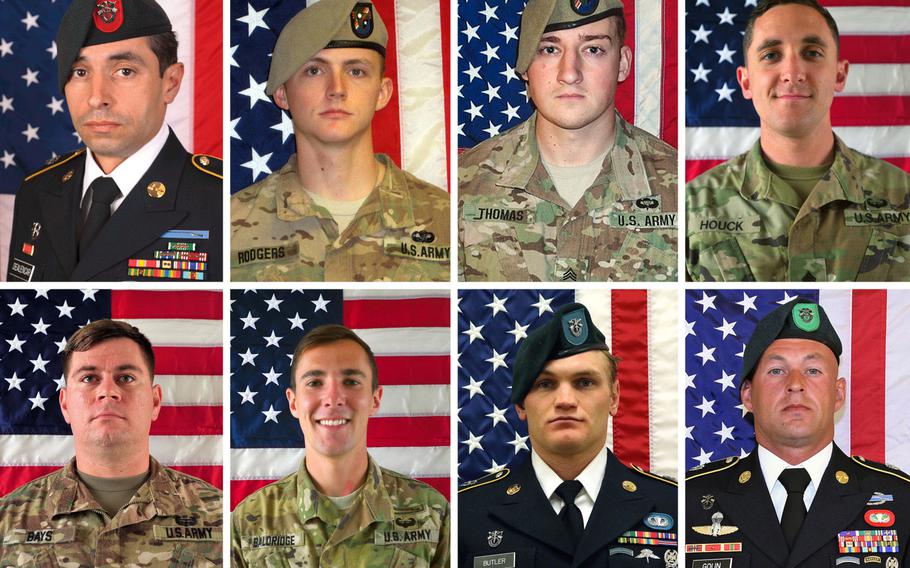 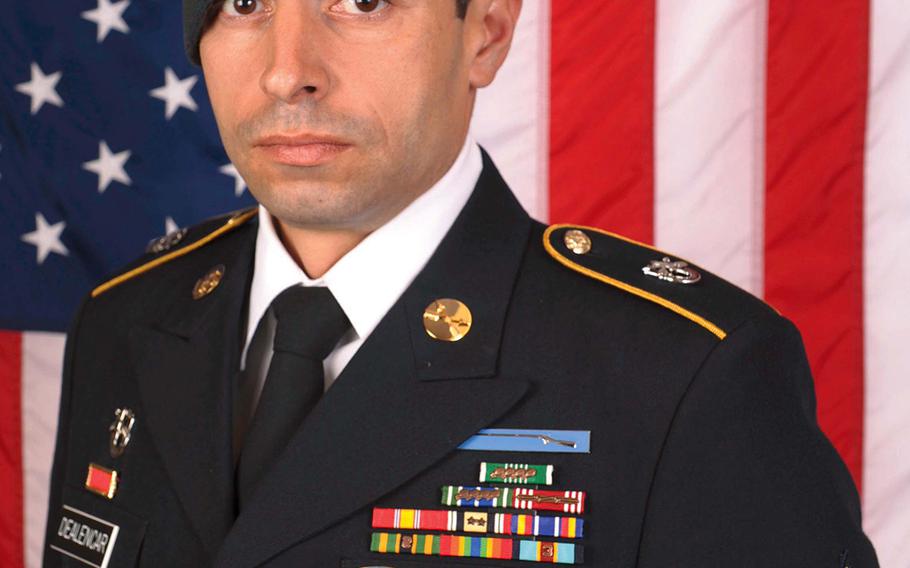 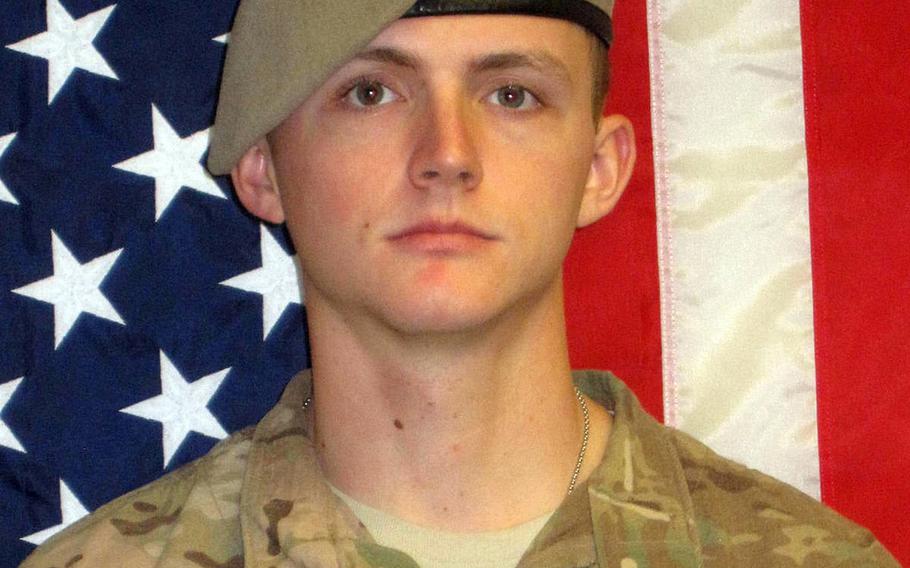 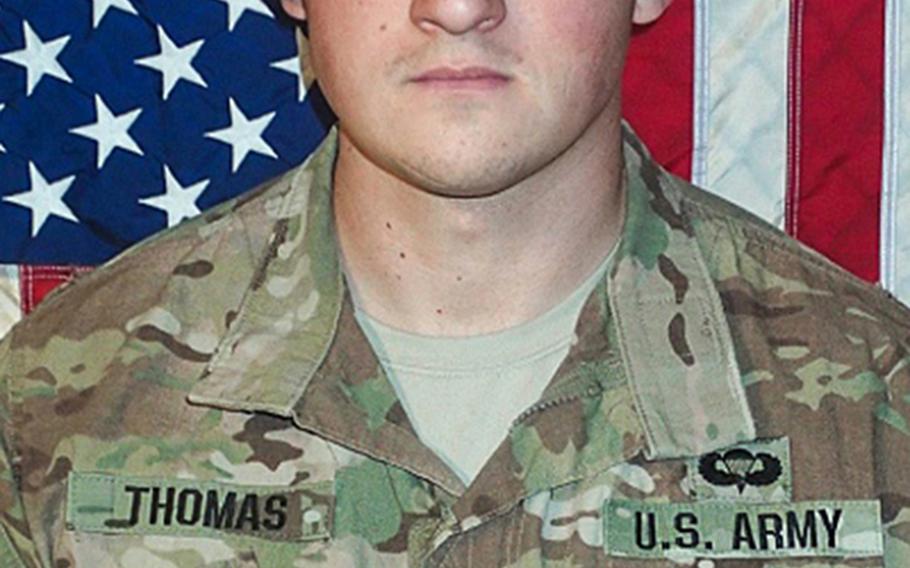 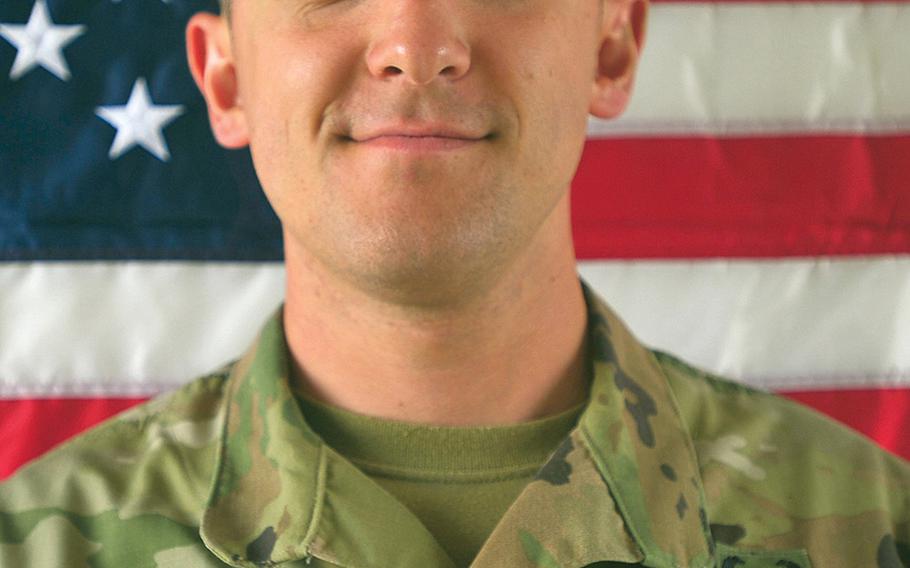 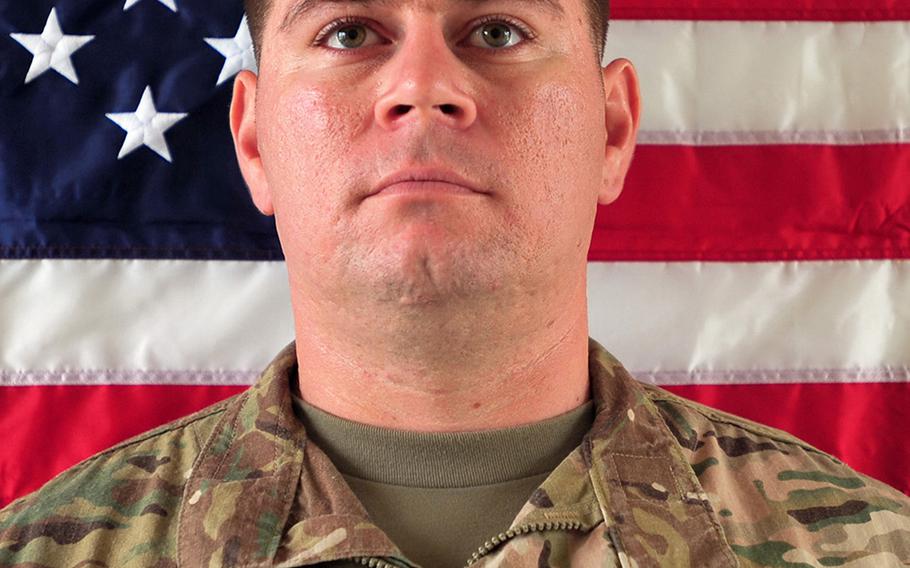 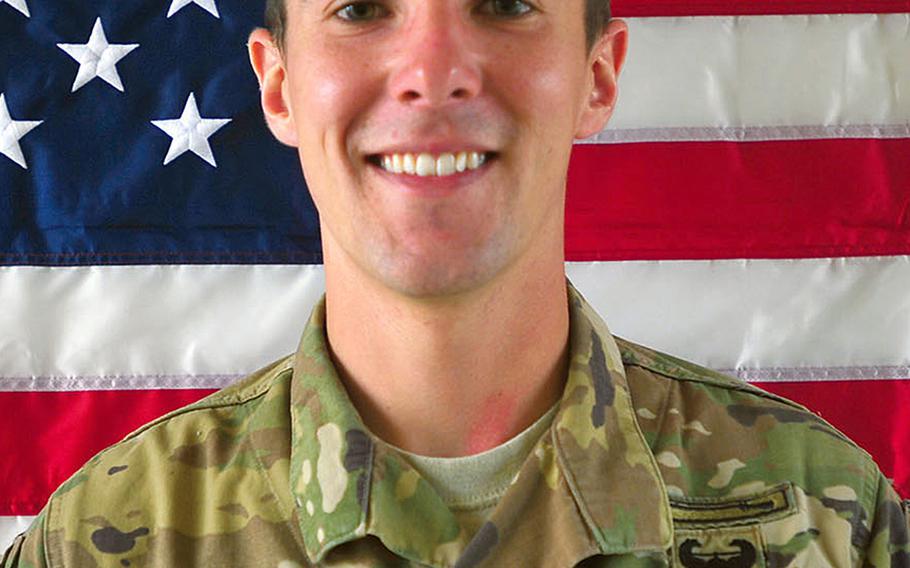 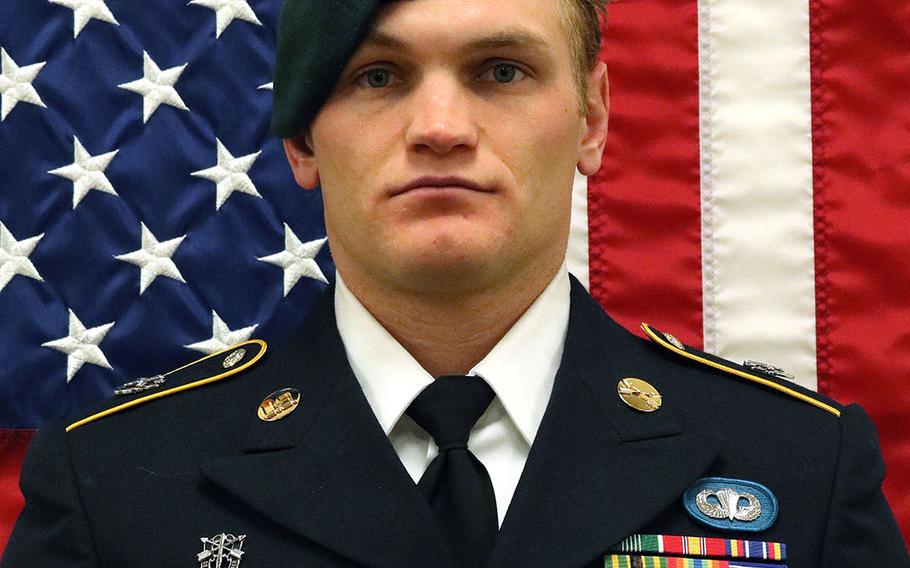 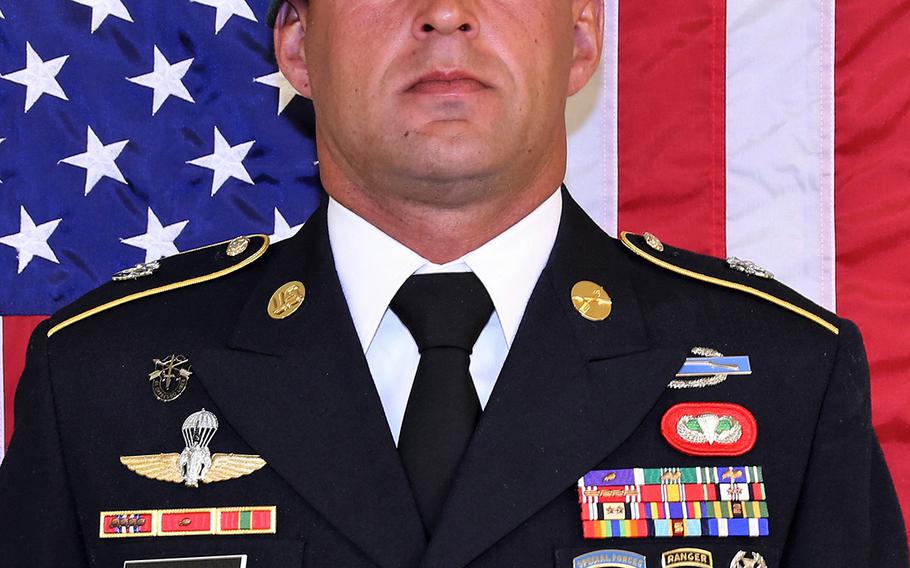 Sgt. 1st Class Mihail Golin, 34, a native of Lativa who joined the Army in 2005 shortly after immigrating to the U.S., was killed while on a foot patrol in Achin district last week, the first U.S. combat death of 2018 and the eighth in Nangarhar in the past nine months.

Since March, U.S. warplanes have conducted hundreds of strikes and U.S. special operations troops have carried out hundreds more tactical operations on the ground in the province.

Nowhere is more dangerous for American troops deployed overseas. Nangarhar is one of the few places Americans have been routinely accompanying Afghan forces into battle. One-third of the 21 U.S. servicemembers killed in combat last year died there, more than in any other single spot where troops were fighting in Afghanistan, Iraq, Syria, Yemen, Somalia and Niger.

Combat deaths were far rarer in 2017 than at the height of the wars in Iraq — in 2007 — and Afghanistan — in 2010 — but the recent uptick in Nangarhar could foreshadow a rise in American bloodshed in the country as the U.S. escalates the fighting in its longest war.

Last year’s combat deaths in Nangarhar all followed the intensification of a counterterrorism campaign there that’s been putting U.S. troops alongside Afghan units on the front lines of the battle with a resilient Islamic State offshoot known as ISIS-Khorasan, or ISIS-K. The group has taken root there in recent years, where the Taliban also operate, making it a three-sided war.

The U.S.-led NATO mission is poised follow suit elsewhere in Afghanistan by putting more advisers and their force protection troops with conventional Afghan tactical units battling the Taliban insurgency. A new campaign launched in the southern province of Helmand last month has already stepped up the fighting with airstrikes and special operations ground raids against the Taliban-linked drug trade there.

It’s all part of the latest shift in the U.S. strategy in Afghanistan, which President Donald Trump announced in August, giving U.S. forces here wider leeway to attack Taliban insurgents and has sent several thousand more troops to support Afghan fighting units. There are around 14,000 U.S. troops in the country this year, up from 11,000 through much of 2017.

Elsewhere in the country last year, four soldiers were killed in action in three other provinces — Helmand and Kandahar in the south, and Logar in the east. The two southern provinces, in the Taliban heartland, have historically been the bloodiest for international forces, with more than 1,500 killed there since 2001. But deaths there have largely tapered off since the withdrawal of most of the international combat forces at the end of 2014.

More than 1,870 U.S. troops have been killed in action and more than 20,000 wounded since the start of the Afghan war in 2001, but combat deaths have been so rare in recent years that a single incident can make one place stand out as the deadliest of the year.

A suicide bombing at Bagram Air Field put it at the top of the list for hostile deaths when six airmen were killed in a December 2015 blast. Another blast in November 2016 that killed three soldiers at Bagram made it the deadliest spot in Afghanistan for Americans that year.

The numbers in Nangarhar last year, however, reflect not a single deadly event, but months of heavy fighting.

Since April, the seven Americans killed fighting there were victims of enemy gunfire, bomb blasts, an insider attack and friendly fire that happened during an intense three-hour battle. That’s compared to one American killed there the year before.

Days after the first of last year’s casualties there in an April firefight, an airstrike drew the world’s attention to the intensified campaign when an Air Force MC-130 dropped a 22,000-pound Massive Ordnance Air Blast bomb, also known as the “mother of all bombs,” on an ISIS-K cave network in the province’s Achin district.

In November, Gen. John W. Nicholson, the top U.S. commander in Afghanistan, said U.S. forces had conducted around 1,400 ground assaults and airstrikes in the area since March and had reduced the group’s grip on Nangarhar from nine districts to parts of three.

The fighting had removed some 1,600 ISIS-K militants from the battlefield, he said, and he promised more strikes in the coming months.

What’s left of the terrorist group there “is stuck in the mountains to starve and die,” President Ashraf Ghani said last month.

But the violence shows no sign of abating as the group so far has defied efforts to snuff them out, managing to carry out several successful attacks throughout the country.

U.S. officials had estimated 700 ISIS-K fighters were operating in Afghanistan last spring, but despite heavy battlefield losses, that estimate had increased by November to 1,100, including 300 outside Nangarhar.

Nicholson said ISIS-K offset its battlefield attrition by recruiting aggressively from the ranks of Tehrik-i-Taliban Pakistan, or TTP, an Islamist group with ties to al-Qaida and the Taliban, known for carrying out a 2014 attack that killed more than 140 people, mostly children, at an army-run school in the Pakistani city of Peshawar.

Hundreds of thousands of TTP fighters and their families had fled to Afghanistan from Pakistan’s federally administered tribal areas under military pressure since 2010. They began establishing communities in Nangarhar’s border districts, exploiting both tribal rivalries there and local sympathies for them as “refugees.”

Many have switched allegiances to ISIS-K since late 2014. The group has established a command base in the Mamand and Peka valleys of Achin district, according to Borhan Osman, a researcher with the Afghan Analysts Network. Residents there told Osman that weapons and ammo are ferried into the rugged passes from just over the Pakistan border on the backs of mules.

It’s there, in the ISIS-K bastion of Mamand Valley, that Afghan forces have been fighting in recent weeks, said Navy Capt. Tom Gresback, a military spokesman in Kabul. Backed by U.S. warplanes and special operations ground troops, they’d pushed more than 4 miles into the valley since Dec. 22, trying to open it to “normal life.”

2017 Nangarhar combat deathsStaff Sgt. Mark R. De Alencar, 37, of Edgewood, Md., died April 8, 2017, from injuries sustained in a firefight. The father of five, who had waited 11 years after high school to enlist in the Army to pursue his dream of being a Green Beret, was assigned to 1st Battalion, 7th Special Forces Group (Airborne), Eglin Air Force Base, Fla.

Sgt. Joshua P. Rodgers, 22, of Bloomington, Ill., and Sgt. Cameron H. Thomas, 23, of Kettering, Ohio, both of the Fort Benning, Georgia-based 3rd Battalion, 75th Ranger Regiment, were killed near the start of a firefight on April 27, 2017, during an operation targeting the head of Afghanistan’s ISIS affiliate, Abdul Haseeb Logari. An Army investigation found the two soldiers had been killed by friendly fire in the fierce battle in which Logari was also killed, the Pentagon has said.

Staff Sgt. Aaron R. Butler, 27, a member of the 19th Special Forces Group (Airborne) out of Camp Williams, Utah, died from injuries suffered from a bomb blast on Aug. 16, 2017. The incident occurred while the Monticello, Utah-native was clearing a building that had been booby trapped to explode. Eleven other soldiers were injured in the blast.