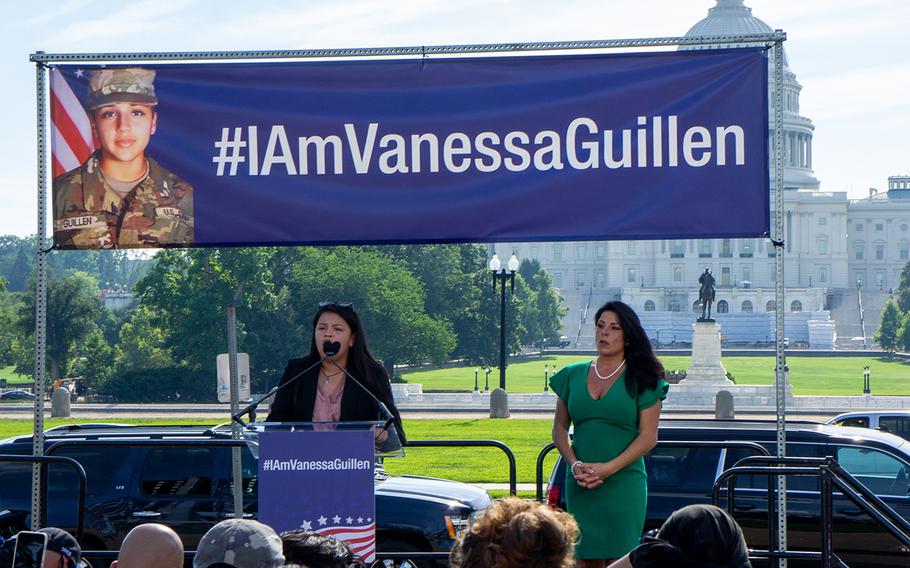 Lupe Guillen, left, speaks at a rally for her sister, slain Army Spc. Vanessa Guillen, near the Capitol in Washington on Thursday, July 30, 2020. At right is Guillen family lawyer Natalie Khawam. (Mareck Rodriguez/For Stars and Stripes) Fort Hood, Texas, has seen a shocking number of soldiers killed in recent months. In this episode of Military Matters, the podcast looks at two of those cases: the homicides of Pfc. Gregory Wedel and Pfc. Brandon Rosecrans.

Host Rod Rodriguez talks with Gregory Wedel's mother, Kim, about her struggle to get information from police and Army officials about her son's case — and, after learning of the discovery of his remains, the agonizing effort she has endured to have his classification as a deserter rescinded so he could receive a military burial.

Rod also speaks with Thomas Berg, the stepfather of Pfc. Brandon Rosecrans, who remains hopeful that authorities will find those who left his son shot and dead in his own burning Jeep.

Many questions remain about slayings at Fort Hood, and the families of Wedel and Rosecrans think their cases largely would have been overlooked had it not been for the months of publicity surrounding the murder of Spc. Vanessa Guillen, the topic of our season two premiere.

These are not the only unsolved or mysterious deaths of American soldiers — however, we hope that putting a spotlight on the homicides of Pfc. Wedel and Pfc. Rosecrans can renew interest in other cases.

If you have any information about the deaths of Pfc. Wedel and Pfc. Rosecrans — or any other cases at Fort Hood — please call the Killeen Police Department at 254-501-8800, or contact your local law enforcement.

Thanks for listening to Military Matters. Subscribe today wherever you get your podcasts fr more episodes.

The full transcript of this podcast can be found here.