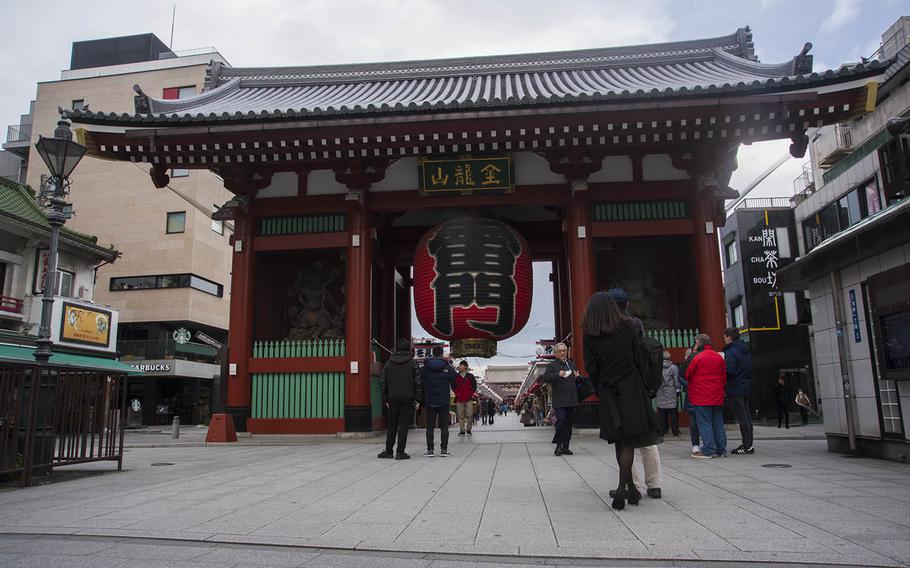 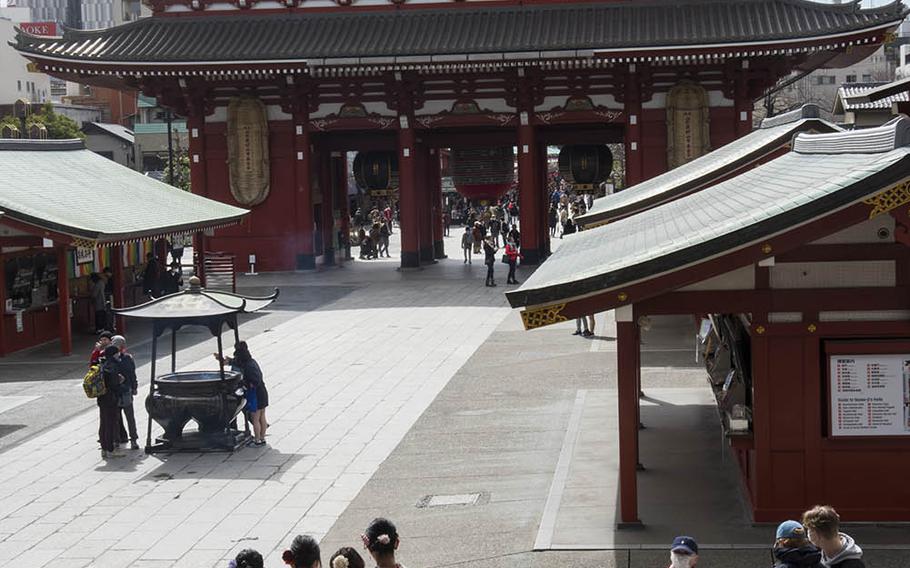 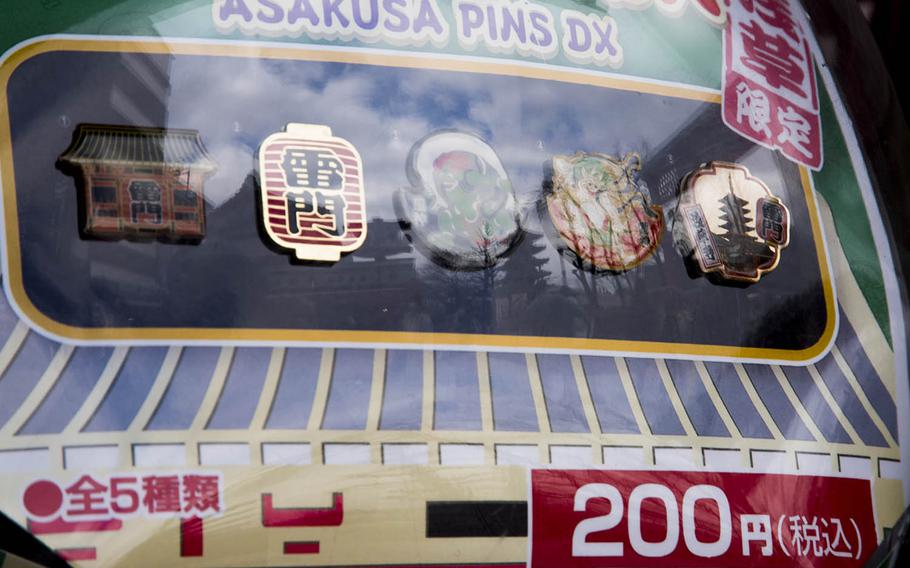 Visitors will find shops, shops and more shops lining the path to the main hall at Sensoji in the old Asakusa district of Tokyo. (Theron Godbold/Stars and Stripes) 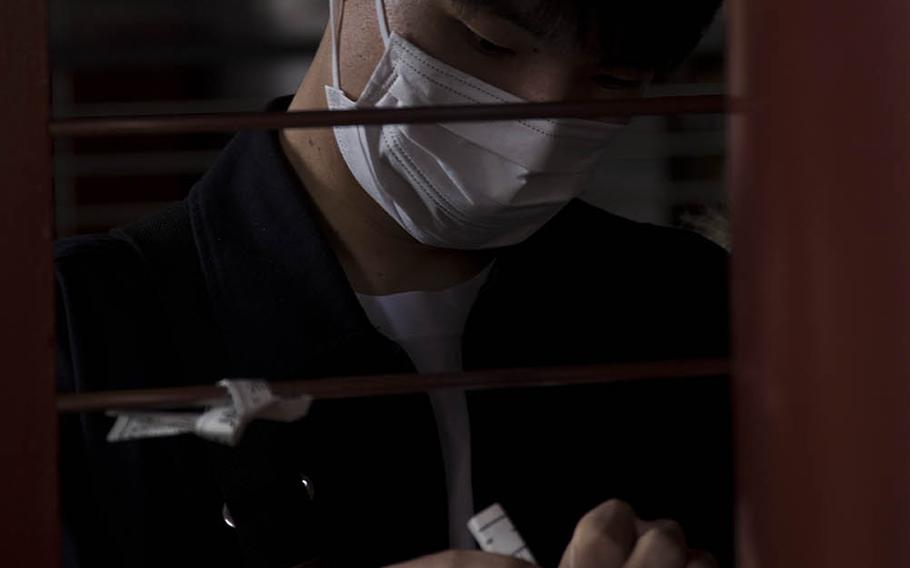 A man discards a bad fortune at Sensoji, the oldest Buddhist temple in Tokyo, March 5, 2020. (Theron Godbold/Stars and Stripes) 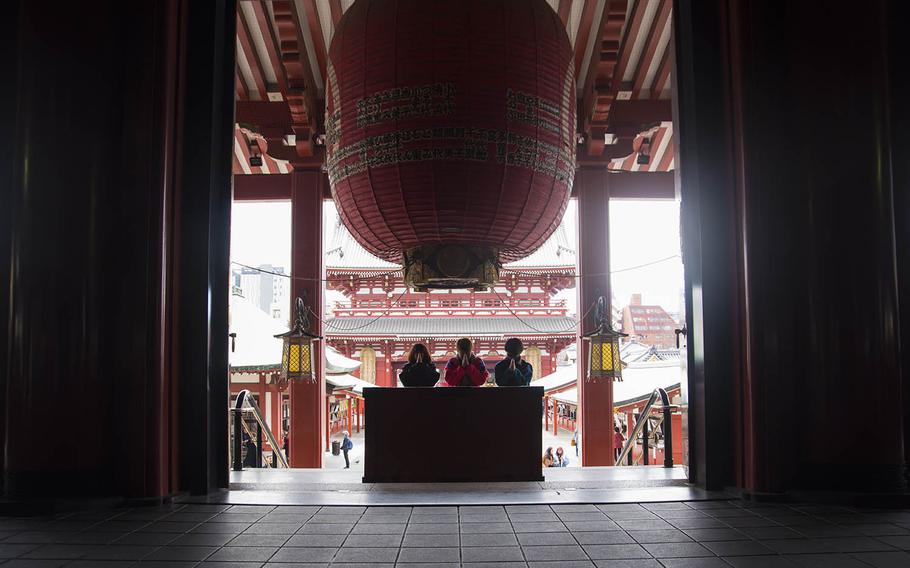 Amid the bustle of Tokyo and in one of the main districts for tourism you will find Sensoji, the oldest Buddhist temple in the city.

Originally completed in the year 645, this bright red compound in old Asakusa lies in the shadow of the Tokyo Skytree and is only a one-minute walk from Asakusa Station.

Steeped in lore, Sensoji’s story begins with two brothers fishing in the nearby Sumida River.

In 628, Hinokuma Hamanari and Hinokuma Takenari pulled from the river a statue of Kannon, the bodhisattva, or goddess, of mercy. The brothers tried to return the statue to the waters, but no matter what they did, it always found its way back to them.

With help from the village chief, the brothers built a small shrine that in 20 years grew into the temple, according to the website Asakusastation.com.

Approaching the temple from the Thunder Gate, you will pass under an enormous lantern and then begin the 200-plus-yard walk through Nakamise-dori, or shopping street.

Lining the street leading to the main temple are shops, shops and more shops. Snacks, umbrellas and swords are just some of the items you can find.

A sweet-smelling haze of incense smoke will fill your nostrils as you walk through Hozomon Gate, another large gate with an enormous lantern, toward the base of the temple and the main temple complex.

To the left you will see the five-story-tall pagoda called Goju-no-to, which was originally built in 942, rebuilt in 1645, destroyed in 1945 during a bombing raid and then finally rebuilt in 1973 with a traditional form but with modern steel and concrete bones, according to Asakusastation.com.

The temple itself, like the rest of the buildings, was destroyed in the March 10, 1945, bombing raid of Tokyo and rebuilt during the 1950s.

The path leading to the steps of Sensoji is flanked by small shops selling temple merchandise like scrolls, incense and fortunes.

Passing by the huge incense burner you may see people wafting smoke around their bodies, a tradition meant to relieve pain or sickness.

Climbing the roughly 20 feet of stairs to the main hall, you can donate to the temple by tossing coins into a trough under another huge lantern, then clap your hands and pray.

Further inside the main temple, the worship area is straight ahead, its ceiling covered in beautiful murals. This is where services take place. There is a large viewing area up front, but visitors normally aren’t allowed inside.

Sensoji TempleDIRECTIONS: Sensoji Temple is a one-minute walk from Asakusa Station, and both the Yamanote and Chuo lines will stop there.

FOOD: There are many small restaurants and bakeries on the nearby shopping street.

INFORMATION: There is no dress code for the temple.