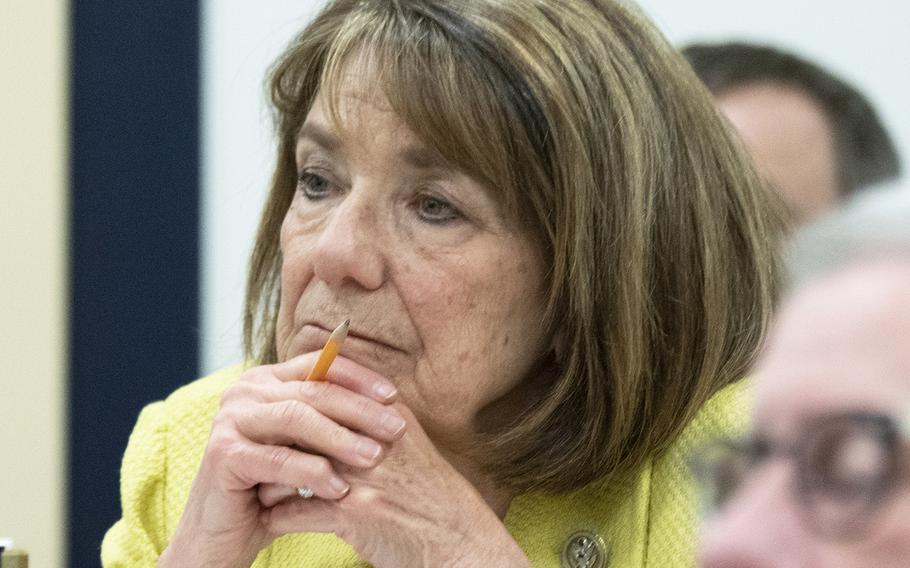 James N. Stewart, left, who is performing the Duties of the Undersecretary of Defense for Personnel and Readiness, listens during a House Armed Services Subcommittee on Military Personnel hearing on Capitol Hill, May 16, 2019. Next to him is Army Deputy Chief of Staff Lt. Gen. Thomas Seamands. ( Joe Gromelski/Stars and Stripes) 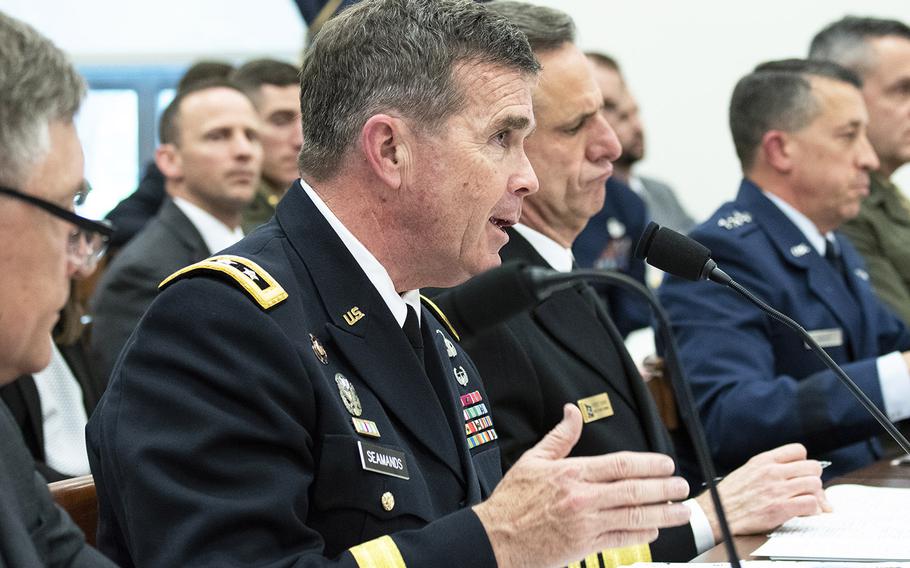 Chief of Naval Personnel Vice Adm.Robert P. Burke answers a question during a House Armed Services Subcommittee on Military Personnel hearing on Capitol Hill, May 16, 2019. Next to him is Air Force Deputy Chief of Staff for Manpower, Personnel and Services Lt. Gen. Brian T. Kelly. ( Joe Gromelski/Stars and Stripes)

WASHINGTON — Despite retention and some recruitment gains, plenty of challenges remain for the military branches to adapt to an evolving economy and growing worker needs, the service chiefs said Thursday. They told a House Armed Services Committee subpanel examining the issue that they’ve installed a series of programs to entice new enlistments and retain servicemembers.

But despite those initiatives, and some positive trends in recruitment, there’s much work ahead to meet the needs of a modern military.

“We have challenges that remain and we still have a great deal of work to get to where we need to be if we are going to be truly competitive,” Vice Adm. Robert Burke, chief of naval personnel, testified before the subpanel on military personnel issues. “But we’re on a good path.”

James Stewart, acting undersecretary of defense for personnel and readiness, told House lawmakers that the military services are exhibiting strong retention rates and are expected to meet goals this year to keep servicemembers from leaving.

Much of that is happening by recognizing an old adage that the military recruits the member but retains the family, Stewart said. That entails offering perks such as increasing basic allowance for housing and offering new technology portals to find child care.

Mississippi Rep. Trent Kelly, the ranking Republican on the subpanel, said he’s especially concerned about severe waits for child care that go beyond six months. Service chiefs told lawmakers that many of the child care delays arise in Hawaii and Alaska, as well as large installations such as Langley Air Force Base and Quantico in Virginia and Marine Corps Base Camp Pendleton in California.

“We need to clearly understand why servicemembers are electing to get out of the military and to understand what would have kept them in the service,” he said. “The Defense Department already has much of the data necessary to answer these questions, but I remain concerned that the department is not maximizing their use of this information in order to make informed policy decisions.”

With the demographics of servicemembers changing, the branches must adapt with the times, Speier said.

“A small number of Americans serve in our armed forces and they have growing expectations,” she said. “The competition for the limited talent is fierce.”

“The Army is moving from an industrial age, personnel distribution system to an information age, market-based model,” he said.

The Army is coming off a difficult recruiting year, when it missed its 2018 goals. However, there are some reports that recruiting this year is trending upwards in major cities, such as New York, Minneapolis and Baltimore.

Lt. Gen. Brian Kelly, Air Force deputy chief of staff for manpower, personnel and services, said his service is on track also to meet its fiscal year 2019 recruiting goals. However, it continues to see pilot shortages of roughly 2,000.

Kelly said initiatives such as a program that lets families defer a move when they have a child in their last year of high school and professional license reimbursements could be key to seeing continued improvements. The Air Force is slated to reach an end strength of 690,500 for 2019.

The Navy, meanwhile, is focusing on its “Sailor 2025” initiative, relying on using new technology, smart phones and social media to spread the word on opportunities, Burke said. It’s slated to grow by 7,500 members this year and another 5,100 next year.

Burke said the service is also focusing on how to retain its large share of married members. In its officer ranks, 67% are married, while that figure is more than 50% for enlisted sailors, he said.

“We have to address that reality if we are to retain the family,” Burke said.

Retaining women Rep. Elaine Luria, D-Va., said the Navy has only promoted a small percentage of female aviators, with less than 4% moved into command positions, according to recent figures.

Only one of those promotions was for a woman of color, she noted.

“We have to improve in this area,” Burke said.

Lt. Gen. Michael Rocco, Marine Corps deputy commandant for manpower and reserve affairs, said its ranks of women has grown from 7.3% five years ago to 8.8% today.

At the 2019 Sea-Air-Space Exposition earlier this month, Sgt. Maj. Robin Fortner, sergeant major of Marine Corps Systems Command, said a weakness remains when it comes to addressing the work-life balance.

“Some things as far as when we look at the levels as the senior members, life and career, with the balance of that, we’re losing a lot of our female Marines when it comes to retention in that aspect,” she said.

And the ranks of women at senior levels drops dramatically, Fortner said.

“Just from my own experience, it’s tough to do this for a long time… because this is physically demanding at the same time,” she said. “It’s not because they’re not capable, it just becomes very, very demanding on your life.”