'You have to help your guys' 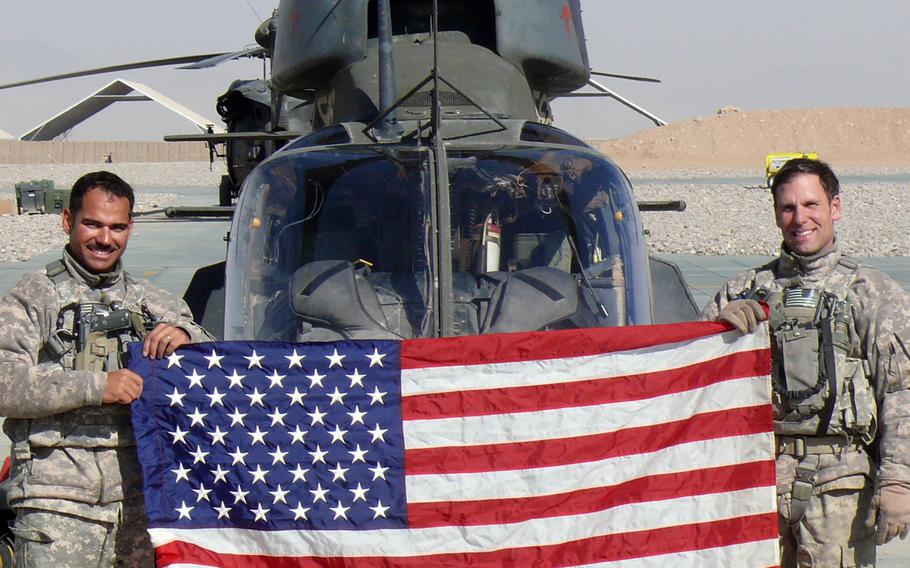 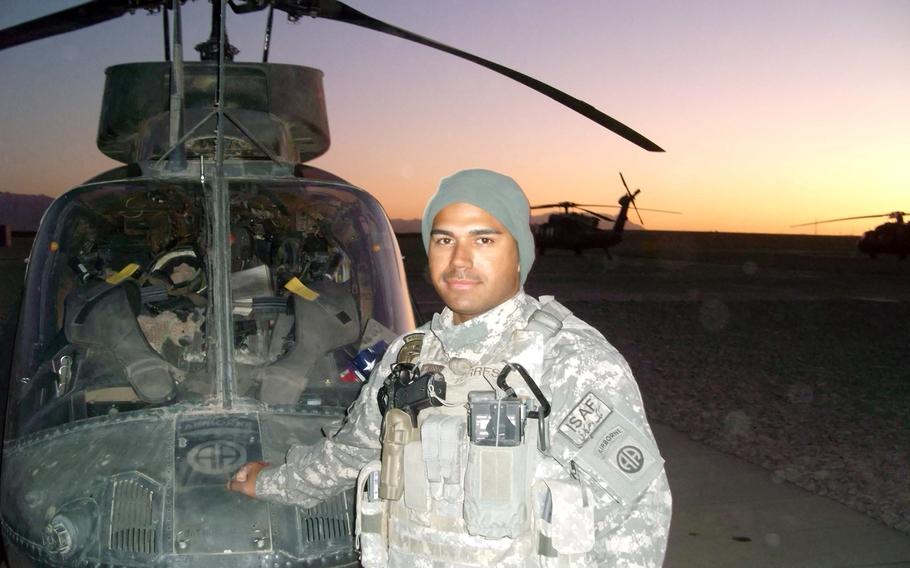 Army Chief Warrant Officer 3 stands in front of his Kiowa OH-58D in 2009. Torres was awarded the Distinguished Flying Cross for a Nov. 11, 2009 mission in Uruzgan Province. (Courtesy of Omar Torres)

When he was a boy, Omar Torres loved playing with toy airplanes and dreamed of flying.

As he grew up — his single mom moving him and his three brothers and sister from Puerto Rico to New York and eventually settling in Florida — the idea of becoming a pilot seemed far from reality.

The Torres children received a lot of love and encouragement but little that money could buy.

“We grew up in a very, very poor household,” Torres said. “My mom couldn’t afford a car and got government assistance. We lived off powdered milk and blocks of cheese for a long time.”

Kids like him didn’t become pilots — or so he thought.

By 17, Torres had dropped out of high school and fathered a child. His wife was pregnant with their second child three years later when Torres, who by then had earned his GED and was working on cars, enlisted in the Army to provide a better life for his growing family.

His impossible dream came true in the process.

“My mom always told me nothing is easy in life,” said Torres, now a Chief Warrant Officer 3 who was awarded the Distinguished Flying Cross in 2010, with two deployments to Afghanistan as pilot under his belt.

“I think the way I grew up and the things I experienced make me appreciate things a little bit more,” said Torres, 30.

His first combat deployment was to Iraq in 2004-05 as a Bradley Fighting Vehicle mechanic. While at the now-defunct Forward Operating Base Speicher, Torres struck up a friendship with a group of warrant officers who flew the Kiowa OH-58D.

The 58s were the first to take flight when insurgents attacked the base, Torres said.

He applied for flight school while downrange and completed several aviation-related correspondence courses to “show on my packet that I’m dedicated.”

His hard work paid off. Torres ranked in the top of his class at flight school and was assigned to fly his first-choice aircraft, the Kiowa OH-58D.

“When they were up in the air the bad guys would stop shooting. I fell in love with the mission,” Torres said.

His perspective from the ground in Iraq would later prove invaluable in the air in Afghanistan. It was during his first tour tour there as a pilot that he accomplished the mission for which he was awarded the Distinguished Flying Cross.

It was Nov. 11, 2009. Torres and fellow pilot Chief Warrant Officer 3 Matthew McEvers — who was also awarded the Distinguished Flying Cross for that day’s mission — and another Kiowa helicopter “were getting ready to call it a day.”

Tasked with light armed reconnaissance, the Kiowas’ job was to escort convoys and patrol the vast expanses of Afghanistan from the sky listening for calls for help from troops on the ground.

Just as they were preparing to return to their base in Tarin Kowt, Uruzgan province, they got a call. A small Special Forces unit in the area was pinned in a three-sided ambush.

“It’s a hard feeling to explain when you hear ground elements on the radio and they’re taking fire and they’re exchanging fire with the enemy,” Torres said. “Just listening to the tone in their voice and the noises behind it, it sets you in the mentality that you have to do something. You have to go out there. You have to help your guys.”

During the 20 minutes it took the two Kiowas to get to the scene, Torres noticed tiny glints of light from atop the buildings as they whizzed by. Young Afghan men were flicking mirrors in the midday sun, signaling each other of the approaching helicopters.

“They had an early warning system. It was rudimentary but it worked,” Torres said. “If you’re not scared when you see those things, you’re not in the right mind-set.

“You always have to be on that line,” Torres said. “You’re scared enough that it makes you concentrate and do what’s right for the guys who are on the ground. That’s what it ultimately comes down to, those guys who are ... in an ambush and if you don’t get there they’re going to get killed.”

They arrived at the fight — about 20 American and Afghan Army soldiers trying to fend off 50 to 60 insurgents armed with rocket-propelled grenades, Russian machine guns and AK-47s who were hiding in the rugged mountains.

A U.S. Predator drone was flying at 17,000 feet above — out of sight but ready to launch missiles from the sky. After coordinating with the drone and the Joint Terminal Attack Controller on the ground, Torres and McEvers set out to stop the enemy fighters from surrounding the unit on the ground.

Flying at about 400 feet, they spotted four or five insurgents on the ground and got clearance to engage one of the two Hellfire missiles on their Kiowa.

The insurgents, Torres recalled, “looked like ‘Ninja Turtles’ with all the stuff strapped on them running across the mountains.”

The first missile malfunctioned, careening 50 degrees off-target. Within seconds he and McEvers coordinated to fire their remaining missile.

This time, it was a direct hit.

“It was kind of like messing around with a bee’s nest,” Torres said of the ensuing fire that swarmed the aircraft. “You know you’re taking fire. You can hear the bullets. It’s a distinct sound, a high-pitched pinging, like popcorn popping.”

They began returning fire with the .50-caliber machine gun aboard the Kiowa while continuing to coordinate with the Predator.

“At that point we were still trying to turn the tide,” Torres said. “There was a lot going on.”

They had no more missiles and were still taking fire but Torres and McEvers remained overhead for an hour to help the ground forces. Eventually the friendly forces on the ground began gaining the upper hand.

At the same time, McEvers and Torres were calling for backup from the regional operations center.

“We’re trying to get the guys to maintain the advantage,” he said.

They got word that no relief was available. By then they had been in the air for two hours “squeezing every pound of fuel out of the aircraft.” They had to break away from the fight.

On the way back to their station, Torres and McEvers reported several insurgents maneuvering toward the troops on the ground to the drone, which deployed a missile to kill the enemy fighters.

“You keep telling yourself, hopefully, you did enough to gain the upper hand; you just want to get back,” he said. “You’re thinking 30 steps ahead, preparing to go back to the fight.”

Torres and McEvers got word that the ground forces had exited the kill zone and were no longer directly threatened.

About a week later, members of the Special Forces unit confirmed what Torres had hoped was the case. No friendly forces had been killed.

“You’re always a little uneasy,” he said. “But we knew we had helped turned the tide.”

Still, it was good to hear it from the men on the ground.

“It just reinforced our feeling that we did good,” Torres said.