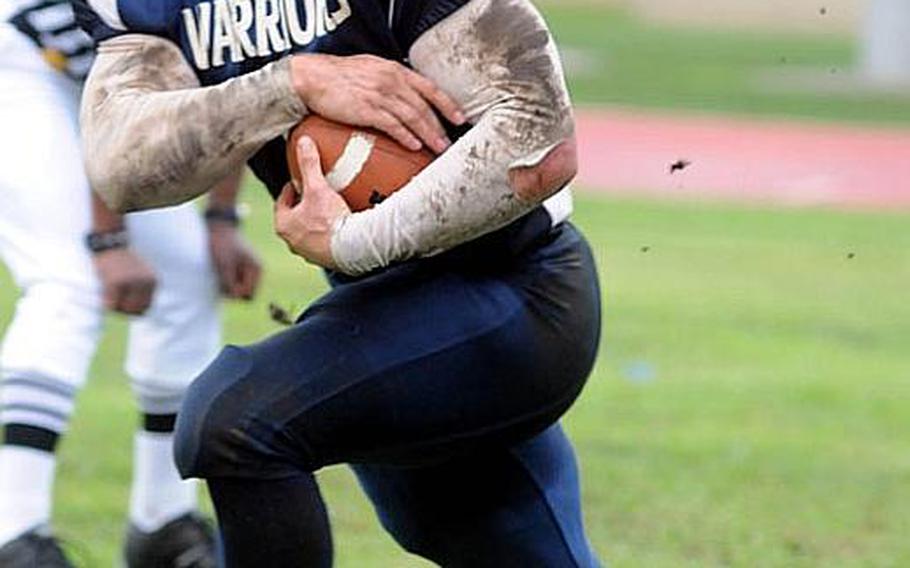 On the strength of Yokota Warriors running back Kevin Fortin's 5-yard touchdown run with just over 10 minutes left, Yokota came from behind to beat Joint Task Force 26-23 on July 31, 2010. The win gave Yokota its first U.S. Forces Japan-American Football League Torii Bowl title and its first USFJ title of any kind since 1994. (Dave Ornauer/Stars and Stripes)

Sixteen years of frustration came to the sweetest possible ending for the Yokota Warriors on the final day of July.

The Warriors&rsquo; come-from-behind, 26-23 victory over Okinawa&rsquo;s Joint Task Force in the U.S. Forces Japan-American Football League Torii Bowl was for more than just themselves, but the players and coaches who&rsquo;d laid the foundation over the years.

&ldquo;It&rsquo;s been a long wait,&rdquo; said coach Selwyn Jones, who has been a part of the program since 1994, the last time Yokota had previously won a USFJ title.

He and his players all along had said they would dedicate the victory to Jones&rsquo; predecessors, Jerome Gray, Jake Dowdell, Chris Bell and Herb Fletcher, and star players such as Ventrus Boyd, J.J. Harris, Marcus Tilley and Aaron Christopher from that 1994 title team.

&ldquo;It was more about family and friends, more about past Warriors and Raiders, it was for them,&rdquo; Jones said. &ldquo;I praise those guys. And I praise these young men. They worked hard for this. I&rsquo;m so proud and thankful.&rdquo;

It was the closest Torii Bowl since that 2000 loss, with the lead changing hands four times, despite Yokota rolling up 349 yards to JTF&rsquo;s 46. JTF forced four turnovers and four sacks and Kent Onuoha kept the Wolfpack in the game with 213 return yards and two TDs.

But it was Kevin Fortin, who scored the winning touchdown with just over 10 minutes left, and the Warriors who in the end ruled the day, and cemented their status as the top Pacific interservice sports story of 2010.

&ldquo;It feels great. It feel amazing,&rdquo; said Fortin, who led both teams with 139 yards on 14 carries. &ldquo;We&rsquo;ve been working this whole season for this moment and we came through.&rdquo;

The rest of the top interservice sports stories this year:

That 3rd Marine Logistics Group ended an eight-year title drought in the Marine Western Pacific Regional Basketball Tournament was sort of overshadowed by their opponents in the July 16 final at Foster Field House. U.S. Naval Hospital Camp Lester not only won games in this tournament for the first time in 17 years; the Corpsmen reached the title game, in which they lost 77-49 to MVP Terrence Terrell and 3rd MLG.

A lesser light than some of his more decorated teammates, Brian Tiner made a name for himself &mdash; and got an invitation to try out for the All-Navy team &mdash; based on his performance for American Legion in the July 4 Firecracker Shootout on Camp Foster. Tiner went 3-for-3 with four RBIs as Legion routed Camp Casey 20-0 in three innings for its fourth straight championship and 13th title overall in a Pacificwide open softball tournament. Tiner later made the All-Navy team in his first try.