With Trump’s deal to end the shutdown, the Coast Guard is closer to getting paid again 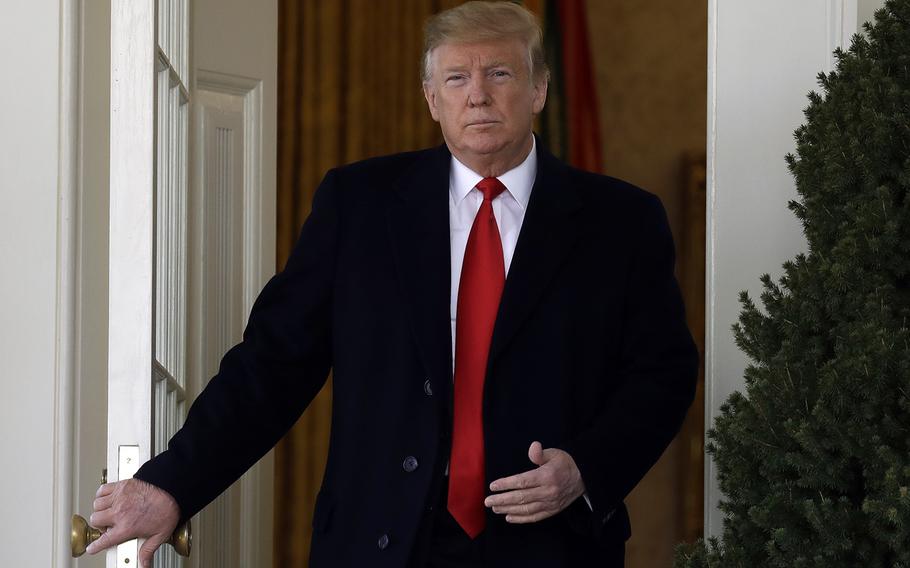 President Donald Trump walks from the Oval Office to speak in the Rose Garden of the White House, Friday, Jan 25, 2019, in Washington. (Evan Vucci/AP)

WASHINGTON — President Donald Trump on Friday signed a three-week temporary funding bill to end the shutdown and reopen the government, setting into motion plans to resume pay for Coast Guard members and other federal workers in the coming days.

The move, approved by the Senate and House on Friday, ended the longest government shutdown in history, which reached its 35th day. The temporary measure, known as a continuing resolution, will fund the government until Feb. 15.

“We have reached a deal to end the shutdown and reopen the federal government,” Trump said from the Rose Garden at the White House, thanking federal workers as he announced the plan. “I will make sure all employees receive their back pay very quickly, or as soon as possible.”

The breakthrough in negotiations comes a day after the Senate failed to push through either of two proposals that would have reopened the government. The upper chamber also was unable to vote on a standalone plan to pay the Coast Guard.

Now, once the funds are received, it will take about three to five days to pay Coast Guard members, said Lt. Amy Midgett, spokeswoman for the service. At that time, furloughed civilian workers also will be called back to work.

“It all comes down to when the actual appropriation is received,” she said. “Once that happens, we will resume normal operations.”

Retired Rear Adm. Cari Thomas, CEO of Coast Guard Mutual Assistance, a nonprofit that offers interest-free loans and grants to members of the Coast Guard, retirees and civilian employees, said they’ve already provided $4.4 million in assistance to more than 4,000 members during the shutdown.

“We are grateful that the men and women of the Coast Guard will be receiving their pay. It has been an extraordinarily difficult period for them and are happy that we played a part in some financial relief during this very difficult time,” she said. “We are still providing assistance until the members receive their pay next week.”

“I’m glad the closed portions of the federal government will reopen and get back online,” said Senate Majority Leader Mitch McConnell, R-Ky. “I’m glad that the dedicated men and women of the Coast Guard, law enforcement, the [Transportation Security Administration], and all the other federal employees will not have to go longer without pay for their work, and will receive their back pay.”

Senate Minority Leader Chuck Schumer, D-N.Y., said the shutdown has left a lasting mark, and workers must never be used as hostages again.

“Most importantly, this agreement means that the government will reopen and 800,000 federal employees will finally get paid,” Schumer said. “After a month of increasing desperation, our dedicated public servants will get the relief and paychecks they are entitles to, including backpay.”

Trump had said he would not sign an overall funding bill without $5.7 billion for a border wall along the U.S.-Mexico border. But Trump and congressional Democrats failed to reach a deal before Friday.

The Coast Guard was able to pay its members their Dec. 31 paychecks, but missed their next payday on Jan. 15. If the shutdown had continued through next week, the nearly 42,000 members of the Coast Guard would miss a second round of pay on Feb. 1. Also that day, roughly 50,000 Coast Guard retirees and their survivors would have missed their first check, as they are paid monthly.

Friday’s deal to fund the Coast Guard and other portions of the closed federal government arrived after weeks of Capitol Hill lobbying to pay servicemembers. Measures, such as S. 21, the “Pay Our Coast Guard Act” sponsored by Sen. John Thune, R-S.D., had failed to gain traction.

The crisis produced anecdotal evidence of the adverse effects of the shutdown on Coast Guard servicemembers as the budget fight entered its fifth week on Friday.

For example, retired Vice Adm. Peter Neffenger, a former vice commandant of the Coast Guard, said Thursday during a Capitol Hill panel discussion that recruits were the latest casualties showing wear from the shutdown. For Coast Guard recruits who began basic training after Dec. 31, they have been training for a job for which they were uncertain when they would be paid, he said.

The service also struggled to get graduates from the Coast Guard Training Center at Cape May in New Jersey to their next duty station. Graduates whose new units were unable to accept them were either being sent back home for hometown recruiting or stayed behind at Cape May until the shutdown ended.