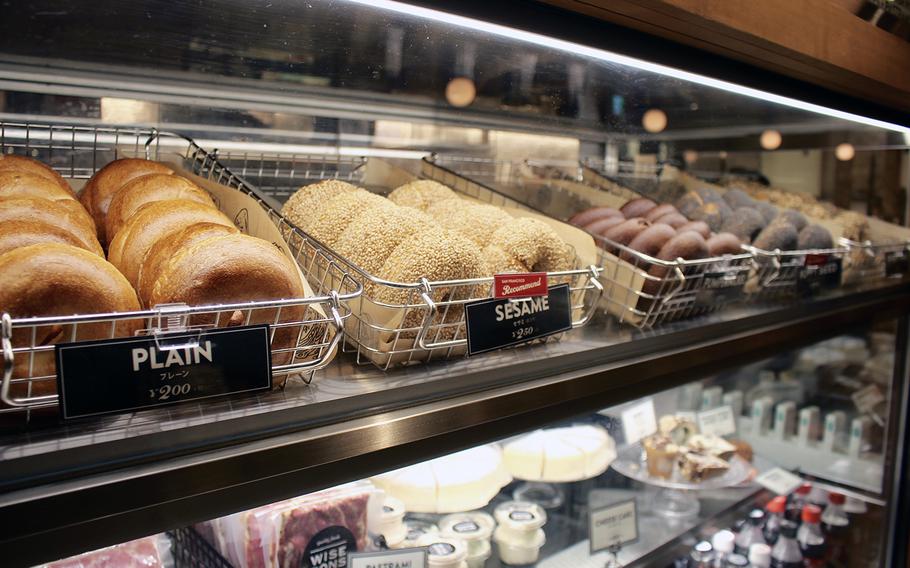 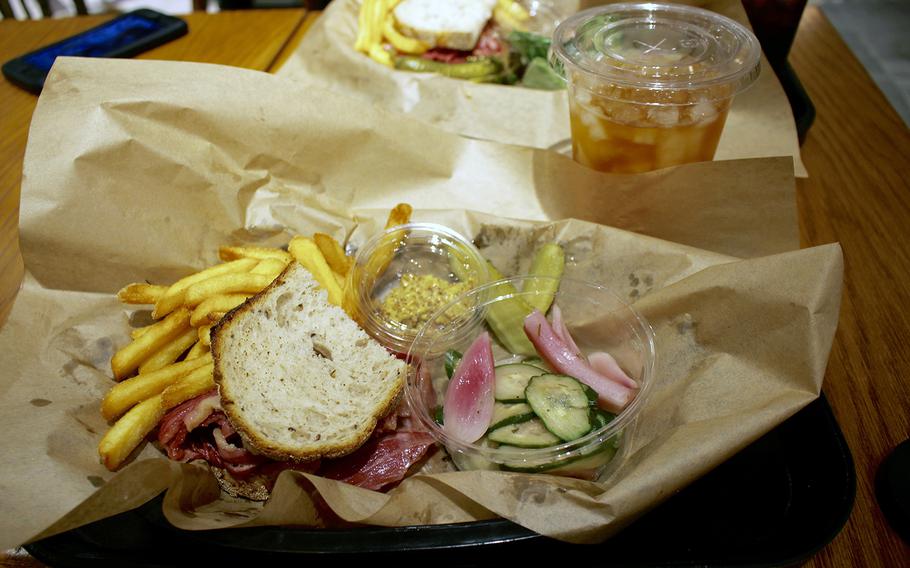 Buy Photo
The hot pastrami sandwich lunch set at Wise Sons Tokyo included a small salad, fries and a drink. The grainy mustard comes on the side to slather on to your heart's content. The set itself looks like a small portion, but it was pretty filling. (Denisse Rauda/Stars and Stripes) 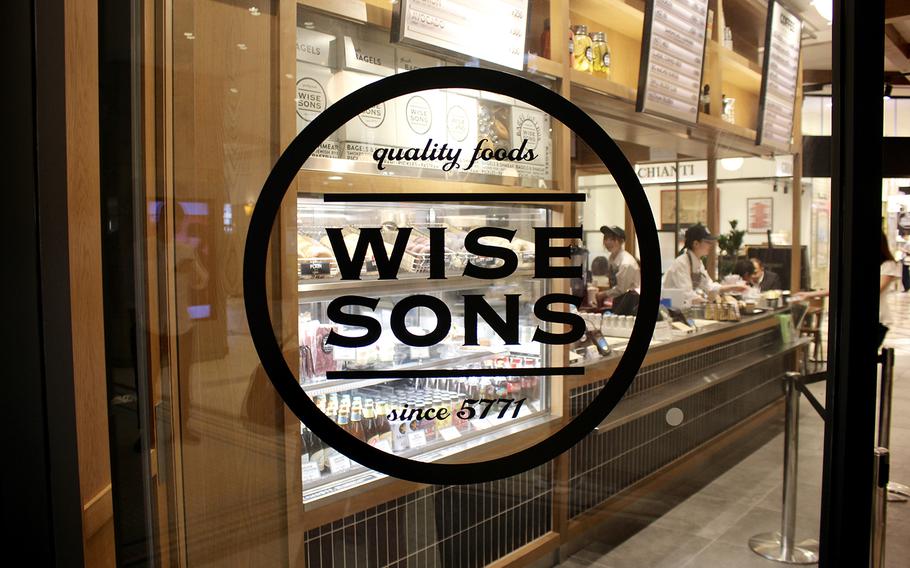 Buy Photo
Wise Sons Delicatessen opened its first overseas location in February in the basement of an office building near Tokyo Station. (Denisse Rauda/Stars and Stripes) 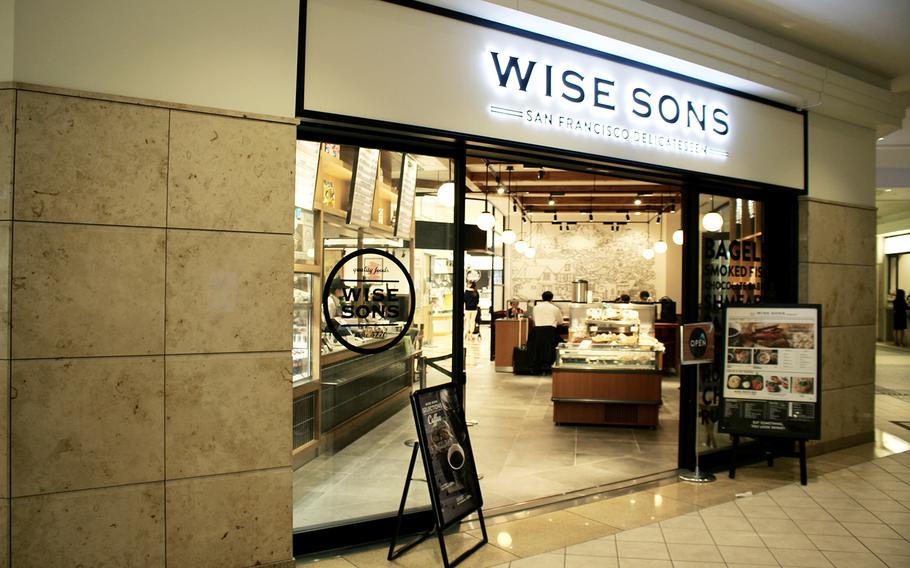 Buy Photo
Wise Sons Tokyo is located in the basement of an office building across from Tokyo Station. The restaurant offers an all-day menu and many to-go options for a quick bite as well. (Denisse Rauda/Stars and Stripes) 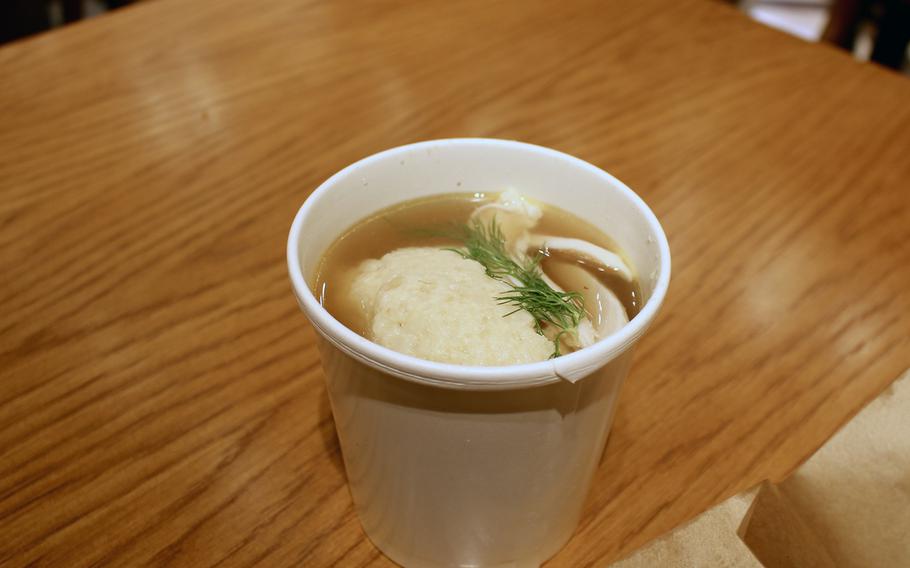 Buy Photo
The matzoh ball soup is a decent serving served hot enough to warm even the chilliest diner but it definetely leave you wanting for more in the flavor department. (Denisse Rauda/Stars and Stripes)

In Tokyo, there are a few times when finding a specific taste of home can prove difficult. For the most part, nearly all expat cravings can be satisfied here — albeit at a premium price, and often with a compromise in flavor and execution.

An entire subsection of food missing from Tokyo’s otherwise vast and varied dining scene is the classic Jewish deli — not unlike one would expect to find in New York or San Francisco.

Thanks to Wise Sons Tokyo, a San Francisco chain that recently opened its first overseas outlet in the eastern section of the sprawling city, the days of hungry expats longing for a piping hot pastrami sandwich or hearty bowl of matzo ball soup are gone.

Located in the basement of a towering office building near Tokyo Station, Wise Sons’ wide selection of deli food promises Tokyoites a meal that departs greatly from the typical Japanese fare served across the city.

A variety of bagels, prepared lunches and desserts greets diners as they enter the restaurant. Wise Sons offers different specials for breakfast and lunch — but the restaurant also has an all-day menu that includes bagel sandwiches, full-size pastrami or corned beef sandwiches, hamburgers and salads.

When Wise Sons Tokyo opened, founders Evan and Ari Bloom told Tablet Magazine they would keep the menu as authentic to the original Wise Sons as possible — with some minor adjustments.

For instance, Wise Sons Tokyo bakes their own matzo, the pastrami is made with Australian beef cured right outside of Tokyo, and the selection of spreads (or schmears, as they’re called on the menu) incorporate traditional Japanese ingredients, such as salmon or yuzu citrus.

Wise Sons also offers a variety of bento-style lunchboxes — the bagel bentos are the first of their kind in Tokyo — which include a bagel, schmear and salad. These compact lunches make the perfect meal to bring along during a ride on the shinkansen, Japan’s bullet train. (I definitely have my eye on the lox box for my next trip departing from Tokyo Station.)

I visited Wise Sons during the post-lunch rush on a recent Friday afternoon, and was surprised to snag a table as the occupants were finishing up. The restaurant offers sufficient seating that includes counter seats — but the seating area almost always fills up during peak hours.

For a lunchtime bargain, try one of the three available lunch sets that range from 800 yen (about $7.25) to 1,200 yen each. The sandwich set includes half of either a classic corned beef or pastrami sandwich, a side and a drink. The matzo ball soup set also comes with a small side salad and drink. For the health-conscious: the salad set includes a side of rye bread and a drink.

I chose the pastrami lunch set with a cucumber salad and iced tea, while my companion opted for the corned beef set. For good measure, we also ordered a cup of matzo ball soup to share.

We waited a good 15 minutes for our order to be delivered to the table. At first glance, the sandwich looked small — which I confirmed upon taking my first bite.

The bread was perfectly toasted and the mustard — which by the way, is also unique to the Tokyo branch, as the owners and chef had to find a Japanese mustard close in flavor and consistency to what is served in the U.S. restaurant — enhanced the flavor of the soft, tangy pastrami.

While the classic corned beef sandwich looked similar to the pastrami, the flavor of the pastrami was far superior.

Lured by the minor discount offered by the lunch set, I immediately regretted my decision to not order the larger sandwich without the frills of a side salad and iced tea.

The matzo ball soup, on the other hand, had a much more generous portion size — but the flavor fell a bit on the bland side. I had recently been suffering from severe allergies, so the warm soup was soothing, and I appreciated the texture of the matzo and the bits of chicken thrown in. However, I would probably not order the soup again unless the weather was extremely cold, and in case I ever had a craving for flavorless broth.

In all, Wise Sons’ lunch set was pretty filling. Despite my initial order regret, I probably wouldn’t have been able to finish the full-sized pastrami sandwich. Even so, at the end of my meal, I still felt like I wasted my time (and appetite) on the uninventive side items. I was also, unfortunately, too full to sample the restaurant’s sweeter offerings, like the babka, the challah French toast or rugelach — but I promised myself I would visit soon to satisfy my sweet tooth.