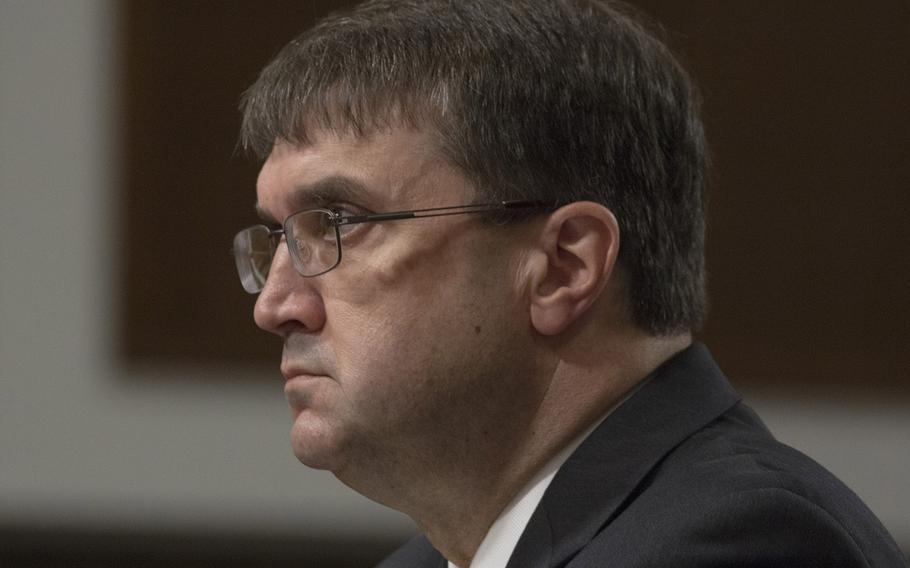 WASHINGTON — Robert Wilkie is slated to appear before lawmakers this week for the first time since he took over as secretary of the Department of Veterans Affairs two months ago.

The Senate Veterans’ Affairs Committee scheduled a hearing, “State of the VA: a 60 Day Report,” for Wednesday afternoon, where senators are expected to ask Wilkie about his plans for implementing several major, congressionally mandated reforms.

Wilkie, a former Pentagon official, was sworn in June 30 after months of political infighting under former VA Secretary David Shulkin. His dismissal this spring led to an exodus of other VA leaders.

Veterans groups are looking to Wilkie to bring stability to the embattled agency, and they expect to hear Wednesday how he plans to do it.

“I think he’s really walked into a tough situation,” said Bob Wallace, executive director of Veterans of Foreign Wars. “He’s really got a full plate in front of him, but I think he’s capable of meeting the challenge. I think he’s the right person at the right time for the VA.”

Here are a few issues Wilkie is likely to be asked about.

Most of what’s in the Mission Act is supposed to be implemented by June 2019, but there are already concerns about whether the VA will meet that goal.

The Mission Act outlined dozens of deadlines for the VA to submit progress reports to Congress. Three reports were due Sept. 4. Of those, two were several days late and one still hadn’t been submitted as of Tuesday, according to the office of Sen. Jon Tester, D-Mont., the ranking Democrat on the Senate Veterans’ Affairs Committee.

The missing report pertains to the VA’s progress with extending benefits to veteran caregivers. The Mission Act mandates that the VA provide benefits, such as monthly stipends, health care and medical training, to caregivers of veterans injured before May 7, 1975.

“VA needs to be hitting these early milestones if it’s going to meet the later ones,” Tester said at a Sept. 5 hearing. “It needs to do better.”

Concerned Veterans for America, a conservative advocacy group, has also expressed concern about the VA meeting the deadlines, particularly those regarding the new program for private-sector medical care.

“It’s important for the VA to meet these deadlines to show that one, they’re taking this seriously, and two, they’re going to be transparent about it and show they can be trusted,” said Dan Caldwell, executive director of CVA. “If they can’t meet a deadline on a report for Congress, how can they be trusted to run the whole program?”

The Mission Act does away with the Veterans Choice program, which was created in 2014 to allow some veterans to receive medical care in the private sector, but only when they live more than 40 miles driving distance from a VA facility or their wait for a VA appointment would be more than 30 days.

Some claim the Choice program was implemented hastily, and many veterans thought the rules were too rigid. Under the Mission Act, Choice expires in June, and a new system is supposed to take its place.

The new law gives the VA secretary broad authority to create rules for when veterans can go into the private sector. In early October, the VA is supposed to report to Congress about its progress creating those rules.

“It’s going to be very revealing,” Caldwell said. “I anticipate a really intense bureaucratic battle between that October deadline and June 2019, the deadline to roll out the actual program.”

Leaders with the VFW and American Legion said they would provide their input to Wilkie about the new program.

“Secretary Wilkie has let us know that he will be asking for our input throughout this while process,” Nuntavong said. “I truly believe he’s going to uphold those promises.”

In May, the VA signed a 10-year, $10 billion contract with Cerner Corp. in Kansas City, Mo., to replace its antiquated electronic health record system – a project intended to allow veterans to track their care through the VA, Department of Defense and private medical providers.

Previous efforts to overhaul the system have failed, leading veterans groups and Congress to call for intense oversight of the project. The House Committee on Veterans’ Affairs established a new subcommittee to oversee it.

“If successful, it will be one of the linchpins of a more responsive, agile and efficient VA,” said Rep. Jim Banks, R-Ind., chairman of the new subcommittee, speaking at its first hearing this month. “If mismanaged, I fear a daunting and disappointing setback. Far too often we only take an interest in a government project when it has already become a public scandal. This time must be different.”

There have been some early concerns because of the unexpected departure of Genevieve Morris, who was selected to lead it. She resigned in August, citing differences with VA leadership.

John Windom, the new project leader, said this month that Morris’ departure had no negative effect.

“There are no continuity issues within our office,” he told lawmakers Sept. 13. “From our perspective, we feel like we have no gaps in leadership.”

Wallace said he thought Wilkie’s experience at the Pentagon would aid the process.

“He’s not going in there and trying to establish a relationship with DOD – he’s got one,” Wallace said. “Hopefully that means the money we spend this time get this done right.”

Vacancies in health care Under orders from Congress, the VA released new data this month that revealed more than 45,000 job vacancies – meaning about one in 10 jobs is unfilled.

Most of those are within the VA health care system, where there were 40,456 vacancies as of June 30.

As the VA works to expand its private-sector care program, some veterans groups are concerned about eroding resources toward VA health care. Federal unions have also been protesting the vacancies, which they argue is a concerted effort by President Donald Trump’s administration to weaken the VA.

“I hope he addresses the vacancy issue,” Nuntavong said. “It’s important because veterans need to get their care. As these servicemembers transition out, we want to make sure VA hospitals are ready to receive them.”

The VA blamed part of the problem on a nationwide shortage of medical professionals. But at a public hearing this month, Tester questioned whether the agency was doing everything it could to fill the open jobs. He described it as the “biggest problem at the VA.”

“I have some serious concerns about the department’s ability to address workforce shortages,” Tester said. “These vacancies continue to be the biggest barrier for health care for our veterans, and the VA isn’t taking the matter seriously enough.”

Wilkie has been at odds with dozens of veterans groups over whether to extend Agent Orange benefits to Navy veterans who served on ships off the coast during the Vietnam War.

The Blue Water Navy Vietnam Veterans Act, HR 299, aims to provide disability compensation and VA health care to former to “Blue Water” Navy veterans, some of whom have fought for years to prove they suffered from ailments caused by the dioxin-laden herbicide Agent Orange.

Wilkie came out in opposition of the bill, citing high costs and insufficient scientific evidence. Veterans groups have responded, angry about the VA’s stance.

“I think that will be spoken to,” Wallace said. “I know there are a number of senators who are supportive of it, so I’m sure they’re going to be talking about that.”

The hearing starts at 3 p.m. Wednesday and will be streamed live on the committee’s website at veterans.senate.gov.