Wiesbaden’s Due Amici features dishes with an Italian twist Buy Photo
Beef carpaccio with sauteed mushrooms and topped with arugula and radicchio is one of the starters on the lunch menu at Due Amici in Wiesbaden, Germany. (David Edge/Stars and Stripes)

Buy Photo
Beef carpaccio with sauteed mushrooms and topped with arugula and radicchio is one of the starters on the lunch menu at Due Amici in Wiesbaden, Germany. (David Edge/Stars and Stripes) Buy Photo
Customers enjoy lunch outdoors at Due Amici in Wiesbaden, Germany, in September 2020. Everyone had to sit outside because of coronavirus restrictions in force in the state of Hessen. (David Edge/Stars and Stripes) 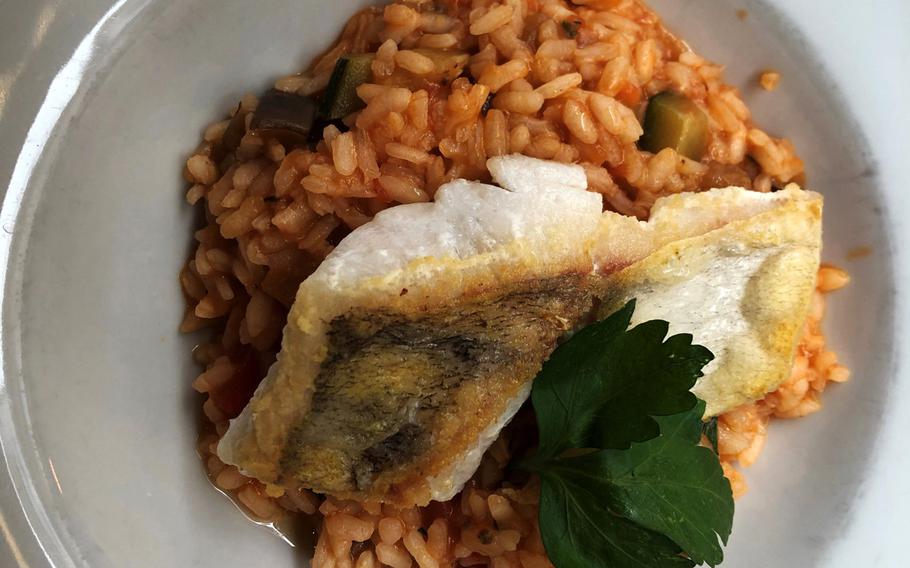 Buy Photo
The risotto with pike perch at Due Amici in Wiesbaden, Germany. (David Edge/Stars and Stripes)

Due Amici in downtown Wiesbaden bills itself as an Italian restaurant that does “crossover” cuisine. I had no idea what crossover cuisine was, but the restaurant came highly recommended by several people, so I decided to check it out.

With a little help from online translation tools, a look at the German-only menu gave me a clue as to what crossover means when applied to food. In addition to the usual fare from across Italy, like different kinds of risotto, pasta, bruschetta, tiramisu for dessert, sauces combining tomatoes and Italian cheeses, there are also international dishes with an Italian twist, such as an Italian burger with gorgonzola cheese. Others had no connection to Italy whatsoever, such as carrot-ginger soup with coconut milk or roast, German corn-fed chicken.

The restaurant is popular with both Germans and Americans and was packed the day I went there for lunch. I was lucky to get a seat and, like everyone else, sat outside because of the coronavirus restrictions imposed by the German state of Hessen.

Because the menu was only in German, I asked the waiter what he liked. He recommended a starter of beef carpaccio, topped with radicchio and arugula and lightly drizzled with olive oil and balsamic vinegar, served with sauteed mushrooms with flaked sea salt. The peppery notes of the arugula and the slight bitterness of the radicchio perfectly complemented the thinly sliced, raw beef and made for a happy marriage of flavors in my mouth.

For my main course I had risotto with a pike perch fillet and a light tomato sauce with zucchini and onions. The fish was cooked to perfection — the skin was crispy and the fillet flaky. The risotto was the only disappointment. I felt that the arborio rice was slightly underdone and lacking risotto’s classic creaminess.

But overall, I understood why so many people had recommended the restaurant to me. For the first time since I’ve been in Germany, every course of my meal had the perfect blend of seasoning. The wait staff were attentive, friendly and helpful, and the lunch menu very affordable — my two-course meal with a beer was 11.95 euros. For those who prefer another tipple, Due Amici offers more than 20 Italian wines and has a full bar.

The only downside was the 20- to 25-minute wait between the starter and main course, and the undercooked risotto. But overall, the experience was so good, I’m willing to give them another chance, which is just another way of saying I plan to eat there again.

More information: Reservations accepted on the website, dueamici.kitchen, which is in German.