U.S. Air Force Maj. Troy Gilbert poses for a photo with his wife, Ginger, and, left to right, sons Greyson and Boston, and daughters Aspen, Isabella and Annalise. The photo was taken in 2006, about a week before Gilbert deployed to Iraq. Later that year, Gilbert, a pilot, was killed when his F-16 crashed in support of coalition troops under attack north of Baghdad. His body was never recovered. (Courtesy of Ginger Gilbert Ravel)

U.S. Air Force Maj. Troy Gilbert poses for a photo with his wife, Ginger, and, left to right, sons Greyson and Boston, and daughters Aspen, Isabella and Annalise. The photo was taken in 2006, about a week before Gilbert deployed to Iraq. Later that year, Gilbert, a pilot, was killed when his F-16 crashed in support of coalition troops under attack north of Baghdad. His body was never recovered. (Courtesy of Ginger Gilbert Ravel) 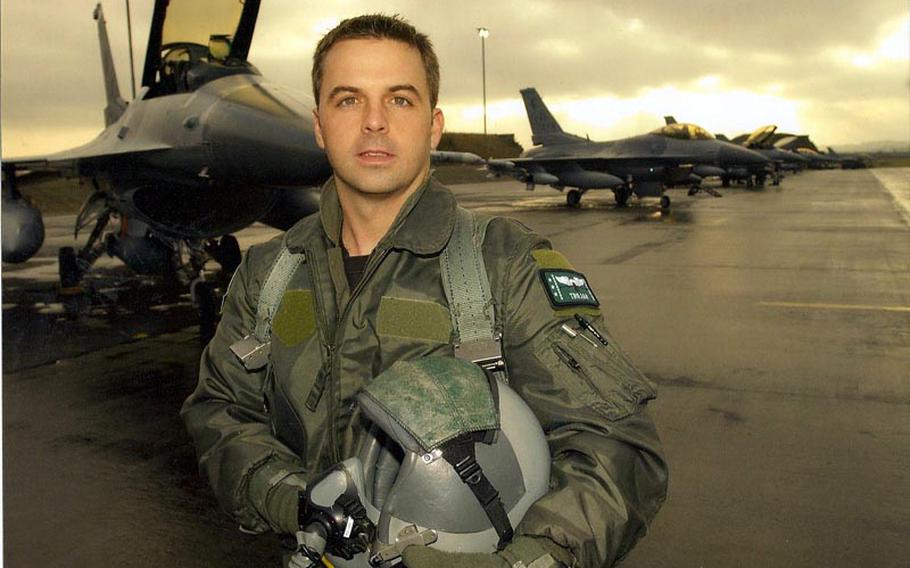 Air Force Maj. Troy Gilbert, an F-16 pilot, poses in front of a line of jets in a photo taken in 2001 or 2002. Gilbert was killed on Nov. 27, 2006, when his F-16 crashed in support of coalition troops under attack north of Baghdad. His body was never recovered. Gilbert's family and friends recently waged a successful grassroots effort to get the Department of Defense to continue looking for the pilot's remains despite the fact that the U.S. has pulled out of Iraq. (Courtesy of Ginger Gilbert Ravel) U.S. Air Force Maj. Troy Gilbert is pictured on a lake in Austria in 2001 or 2002. Gilbert died on Nov. 27, 2006, when his F-16 crashed in support of coalition troops under attack north of Baghdad. His body was never recovered. Gilbert&#39;s family and friends recently waged a successful grassroots effort to get the Department of Defense to continue looking for the pilot&#39;s remains despite the fact that the U.S. has pulled out of Iraq. (Courtesy of Ginger Gilbert Ravel)

When Air Force pilot Maj. Troy Gilbert's casket was buried at Arlington National Cemetery in 2006, his widow, Ginger Gilbert, was at peace, even though she knew only "a teeny little bit" of his remains were inside and his body was somewhere in Iraq.

"I know Troy went to be with the Lord, [and our bodies] are just our shells," she said.

DNA tests and other forensic evidence made it clear her husband was dead. Ginger was comforted in knowing the U.S. military was actively looking for the bulk of Gilbert's remains in accordance with its mantra that no man is ever left behind.

That changed five years later, when President Barack Obama announced plans for the withdrawal of all U.S. troops from Iraq by the end of 2011 and the U.S. military looked to close the books on the nearly decadelong war.

"All of us went on alert," Ginger said, referring to Gilbert's family and friends. "If everybody leaves, what happens to Troy? Because his DNA was confirmed &hellip; on the books, he was &lsquo;killed in action.' His body was accounted for. In the Air Force's eyes, he wasn't missing."

After the pilot's death, insurgents featured his body in propaganda videos posted on the Internet to mock then-President George W. Bush and the U.S. military's efforts in Iraq.

Gilbert's family and friends asked anyone who would listen if the U.S. would continue its quest to recover the pilot's remains after the last servicemember left Iraq.

The answer was always the same.

So Ginger led a group of Gilbert's relatives and friends in a grass-roots campaign that quickly reached the most powerful people in the Pentagon and got the Department of Defense to reverse its position.

As of Feb. 24, Gilbert is still listed as someone killed in action whose body is accounted for, but his widow said, "He is a &lsquo;special consideration' &hellip; an exemption, kind of a missing person."

Now, she said, if someone comes forward with information on Gilbert's remains, American officials will be required to look for them.

&lsquo;A calling for his life'

Despite the turmoil in her life in the past five years, Ginger says she has moved on, content to focus on raising the couple's five children at her San Antonio home while holding on to memories of the "extremely handsome" Air Force brat she started dating in college, the one who always wanted to be a pilot.

Ginger was a 19-year-old sophomore at Angelo State University in Texas when she met Gilbert, a 17-year-old freshman who had lived all over the world thanks to his father's Air Force career.

The college sweethearts transferred to Texas Tech and, a week after graduation in 1993, they married and set out on "a very short civilian life."

About six months into their marriage, Gilbert told her that his childhood dream of becoming a pilot was still strong.

"He grew up on Air Force bases &hellip; and he just always wanted to fly," she said. "God had a calling for his life from a very early age."

Ginger said her husband graduated from pilot training in 1999. As his career took off, the Gilberts started having children, five of them, including identical twin daughters.

Raising the children, Ginger said, "was where we hit our stride together. Troy was very patient beyond anything I had ever seen."

In 2006, Gilbert was off to Iraq to fly F-16s, assigned to the 332nd Air Expeditionary Wing at Balad Air Base.

"He volunteered," Ginger said. "He didn't have to go."

During his first weeks in Iraq, Gilbert was struck by the humanity and the hate he saw, according to his widow.

The pilot befriended a group of surgeons, she said, and he volunteered in his off-duty time at the base hospital, "mopping blood off the floor, handing them instruments."

"He was just fascinated by the lengths they went to save a human life," Ginger said, whether the patient was American or Iraqi.

Ginger said her husband, a devout Christian, did not know how he would feel about engaging in hostilities. But he later wrote her letters describing the enemy's hatred for Americans and his belief that if the fight wasn't won in Iraq, it would resume on American soil.

"He was at peace with his profession," she said. "There was so much injustice over there. He felt it was the right thing to do."

Then, in the morning of a late November day in 2006, there was a knock on Ginger's front door.

"Just like you see in the movies," she said.

Ginger was initially told her husband's plane had gone down, but U.S. troops had not been able to get to the crash site. That night, she was told Gilbert's body was gone.

Five days later, a "tiny amount of DNA that was in the cockpit" confirmed that he had been killed, she said.

According to the accident investigation report, Gilbert, 34, was piloting one of two F-16s providing surveillance and reconnaissance for ground forces about 20 miles north of Baghdad on Nov. 27, 2006, when a coalition helicopter was forced down.

Ground forces securing the helicopter came under attack from insurgents, and Gilbert was told to destroy enemy vehicles fleeing up a highway, while his wingman returned to a tanker aircraft to refuel.

Gilbert rolled in on a classic strafing run, flying less than 200 feet from the ground and destroyed the lead vehicle. When he made a second pass, his jet hit the ground.

An Air Force investigation into the accident determined that Gilbert was so focused on his target he forgot about the ground entirely.

"In my opinion, he never knew what happened," then-Brig. Gen. David Goldfein, head of the board investigating the crash, later told reporters.

Gilbert was posthumously awarded the Distinguished Flying Cross with Valor.

After a memorial and funeral services, images of Gilbert's body surfaced in anti-American propaganda videos. The videos were subsequently cited by anti-war advocates in the U.S.

She appeared at a news conference to take issue with insurgents using her husband's death to "brainwash" the Iraqi people, and anti-war advocates at home using it to make political hay.

"Whether you are for the war or against the war, Americans should support the troops," she said.

Meanwhile, searches were routinely being launched for her husband's body.

Ginger went on with her life and, in May 2008, she married Air Force Col. Jim Ravella, a pilot who had lost his wife to breast cancer. On Memorial Day 2009, Ravella formally adopted Ginger's children - Boston, who is now 14; Greyson, 12; Isabella, 8; and 6-year-old identical twins Aspen and Annalise.

In 2009, Ginger began traveling the country speaking on behalf of the Folds of Honor Foundation, an organization that raises money for scholarships for children of servicemembers killed in action.

Then, last year, U.S. officials started to close the books on the Iraq War.

When it became clear the search for Gilbert's remains would officially cease, Ginger said Gilbert's family and friends joined in the fight to get his case reopened.

Lawmakers were contacted. Media interviews were done. Meetings with military officials were held.

In February, the Pentagon said Gilbert's case would remain open.

Air Force Secretary Michael Donley issued a statement saying, "His family deserves nothing less than our best effort to recover his remains and return them to his loved ones."

Maj. Carie Parker, spokeswoman for the Defense Prisoner of War/Missing Personnel Office, said she could not recall another case where the Department of Defense continued efforts to locate the rest of a servicemember's remains after some remains had been returned to the U.S. for burial.

"This is unique," she said.

Ginger says she looks forward to the day someone comes forward with information about the whereabouts of Gilbert's remains, and the Iraq government "allows us to come in and search."

She is thankful that the Air Force "looked beyond a regulation to do the right thing."